The Greater Lumbini Area (GLA) comprises the three Nepali districts of Rupandehi, Nawalparasi and Kapilavastu, and is centred on the UNESCO World Heritage Site of Lumbini. The GLA contains hundreds of archaeological sites, some of which are directly associated with the life of the Buddha. Key sites include Lumbini, where Lord Buddha was born, Tilaurakot-Kapilavastu, the city in which he spent the first 29 years of his life, and Ramagrama, one of the original eight nirvana stupas which house his ashes. Tilaurakot and Ramagrama are on the tentative list for UNESCO World Heritage Status.

The GLA lies within Nepal’s western Terai, a flat alluvial plain bisected by several major rivers. These rivers flow southwards from the Siwalik Hills before eventually merging with the Ganges River. The silts that are deposited by annual floodwaters from the rivers, are what make the region so agriculturally rich, and why people have been drawn to live here for millennia.

Whilst the Terai was the heartland and origin of Buddhism, most of the current population of the region are Hindu and Muslim. In the eighteenth and nineteenth centuries, the Terai was sparsely inhabited. The dense forest and jungle acted as an informal buffer between the British Raj and the Hill States to the north.

The main population living in the Terai were Tharu. Local communities practised small scale agriculture and had developed a natural resistance to malaria. From the mid-19th century, the forests of the Terai were slowly cleared for agriculture and industry, and archaeological sites associated with Buddhism were rediscovered.

Sites in the Greater Lumbini Area 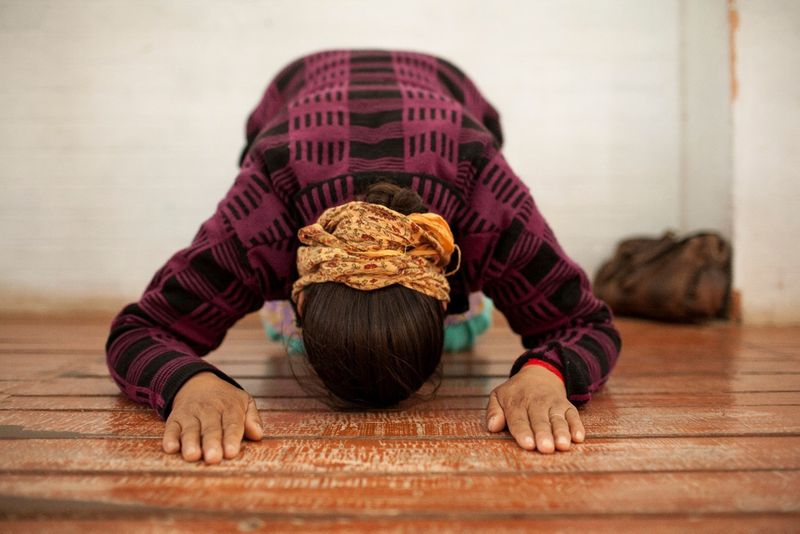 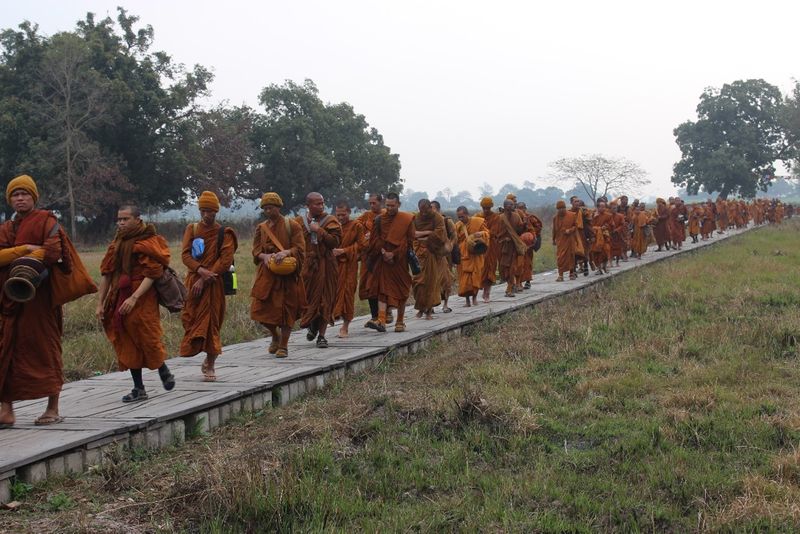 Other Sites in the GLA 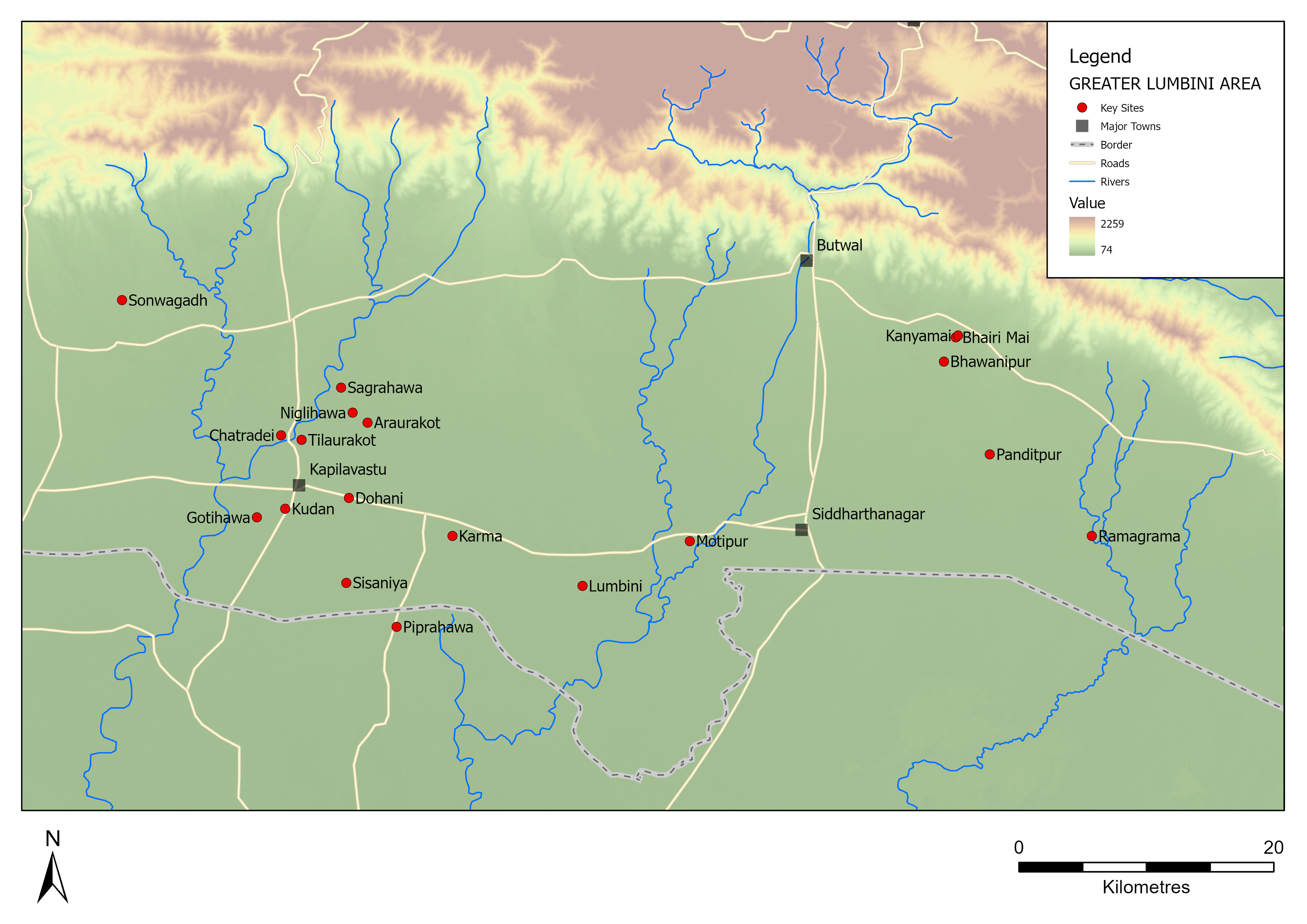 Lumbini was “rediscovered” in 1896 when Dr Führer, Archaeological Surveyor of the Indian Northwestern Provinces and Oudh Circle, was invited by General Khadga Shumsher J.B. Rana, the Governor of Palpa, to undertake archaeological investigations close to his camp. Together they identified four mounds, on the largest of which stood a temple dedicated to the river goddess Rupa Devi. Führer re-identified the statue of Rupa Devi as representing Maya Devi giving birth to Gautama Buddha. Adjacent to the temple was a broken pillar rising about ten feet from the ground. Führer and General Rana excavated the base of the pillar and uncovered Asoka’s inscription. The translation of the inscription clearly identified the site as Lumbini. The historic descriptions of Chinese pilgrims were used to identify further sites in the area, linking Tilaurakot with ancient Kapilavastu.

In 1899, P.C. Mukherji of the Archaeological Survey of India surveyed and excavated the ruins at Tilaurakot. Mukherji recognised the wooded mound as the site of a rectangular fort protected by a wall and ditch. He cut sections through the fortification wall and cleared the eastern gateway. He also confirmed the identification of the eastern stupa, the presence of industrial activity to the south of the site, and structures to the north and west of the city. Mukherji was convinced that the remains at the site of Tilaurakot represented Kapilavastu. He again used the descriptions of Faxian and Xuanzang to support his theory. Whilst most people accepted Tilaurakot as Kapilavastu, there remained some doubt, stemming from differences in the descriptions given by the two Chinese pilgrims.

Little archaeological work was carried out in the Terai during the mid-twentieth century. In 1962, joint excavations were conducted at Tilaurakot and Kudan by the Nepali Department of Archaeology and the Archaeological Survey of India, under the direction of Debala Mitra. She courted controversy by concluding that Tilaurakot was no older than the second century BCE, and thus could not be ancient Kapilavastu.

In 1972 the Nepali archaeologist B.K. Rijal began to expose and restore monuments at Lumbini, identifying the first pre-Mauryan structure north of the Asokan Pillar. He was followed by Tara Nanda Mishra, who conducted more systematic excavations at Lumbini and Tilaurakot during the 1980s. Mishra developed chronological sequences for the main sites and focused on trying to understand their development over time.

Whilst a Japanese team from Rissho University exposed a series of structures at Tilaurakot between 1967 and 1977, major international interventions began in the 1990s. The Japanese Buddhist Federation conducted a large-scale excavation of the Maya Devi Temple, exposing the brickwork that is visible today. The Italian archaeologist Giovanni Verardi re-excavated the stupa and pillar at Gotihawa, as well as the small settlement mound at Pipri.

In 2009 UNESCO and the Government of Nepal recognised that the World Heritage Site of Lumbini faced a number of challenges ranging from the deteriorating condition of the Asokan Pillar and archaeological monuments contained within the new temple, to the inadequately understood and mapped archaeological remains both within the World Heritage Property and adjacent buffer zone. Furthermore, there was a need to identify subsurface archaeological deposits so that facilities for pilgrims and tourists could be installed without damaging valuable archaeology.

As a result, a project entitled Strengthening the Conservation and Management of Lumbini: the Birthplace of Lord Buddha was established and funded through the Japanese Funds-in-Trust-for-UNESCO (JFiT). This project brought together archaeologists, conservators, site planners and management teams to look at how to protect and improve the management of Lumbini in light of future developments. The three year project (2011-2013) was led by Professor Yukio Nishamura of Tokyo University, and Professor Robin Coningham was invited to lead the archaeological component of the project on account of his knowledge of Buddhist archaeology and experience of working in Nepal.

The team were successful in identifying evidence of the earliest Buddhist shrine in South Asia, dating to the middle of the sixth century BC – constructed during or shortly after the lifetime of the Buddha. This shrine was later elaborated by successive donors, as Lumbini grew from a small village to major pilgrimage centre. Evidence of this early village was found close to the modern Police Station, and dates to 1300BC – long before the birth of the Buddha. This trajectory of development of the site has now been documented and provides a unique insight into the social and cultural dynamics of early South Asia, as well as to debates surrounding the date of the Buddha’s birth.

The archaeological research has helped to revise the development plans for the site, reversing proposals that would have damaged some of the early archaeological sequences at the site. This input into the long-term management and preservation of the site is becoming increasingly important in light of the Asian Development Bank's ambition to develop Lumbini and the surrounding archaeological vestiges as a major tourist and pilgrimage destinations, with the number of visitors expected to increase rapidly in the future. 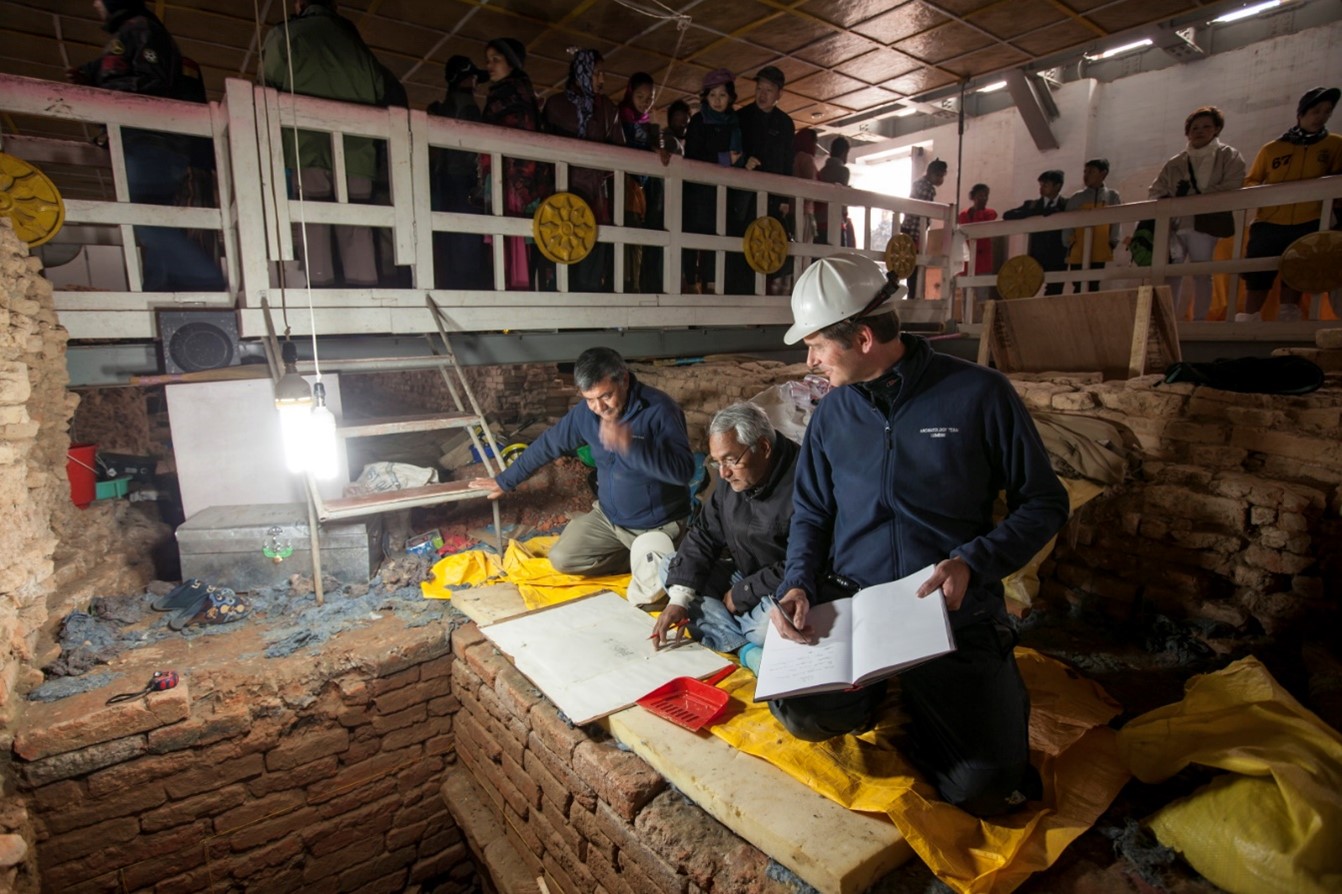 Image: The UNESCO Chair team and partners excavating within the Maya Devi Temple

The site of Tilaurakot is located three kilometres north of the town of Taulihawa on the eastern bank of the river Banganga. The site consists of a fortified 'citadel' of approximately 500 metres by 400 metres and is surrounded by a series of associated monuments. The archaeologist P.C. Mukherji was convinced that the remains at the site of Tilaurakot represented Kapilavastu, the capital of the Sakya kingdom, and childhood home of the Buddha.

Two short field seasons were conducted in 2012 and 2013, focusing on assessment work at the southern industrial mound and northern rampart. After the success of Phase I of the UNESCO project Strengthening the Conservation and Management of Lumbini: the Birthplace of Lord Buddha, it was agreed that the next four years of UNESCO funding through the Japanese funds-in-Trust-for-UNESCO would focus on investigating and developing the site of Tilaurakot. Phase II of the project began in 2014 and brought together archaeologists, conservators, site planners and management teams to look at how to protect, preserve and promote the site. The 2018 field season was generously funded through a private donation by Dr Kasai of the Hotel Kasai Lumbini to bridge a hiatus in UNESCO funding. Phase III of the UNESCO-JFiT funding began in 2019, with a greater focus on conserving and presenting the site for visitors, pilgrims and the local community. The project is set to continue to a Phase IV beginning in November 2022.

The research at Tilaurakot has revealed the most complete plan of an Early Historic South Asian city since John Marshall worked at Taxila in the 1920s. Geophysical survey within and around the city has revealed a grid-plan layout of houses, shops, buildings, streets and lanes, with cardinally oriented gateways provided access in and out of the city. Combined with targeted excavations, the archaeological research has uncovered a monumental walled compound measuring roughly 100x100 metres at the centre of the site. A brick-lined tank has also been identified, just to the north of this compound, and outside the city ramparts, the remains of a large monastic complex have been revealed.

The project has also begun to explore the morphology and extent of surrounding sites in the Natal landscape of the Buddha, including Ramagrama, Kudan, Araurakot, Sisaniya, Sagrahawa, Karma and Dohani. These investigations are providing further insights into understanding the origins and developments of these sites, and their links to Tilaurakot and Lumbini, as well as mapping areas of heritage at risk from development. 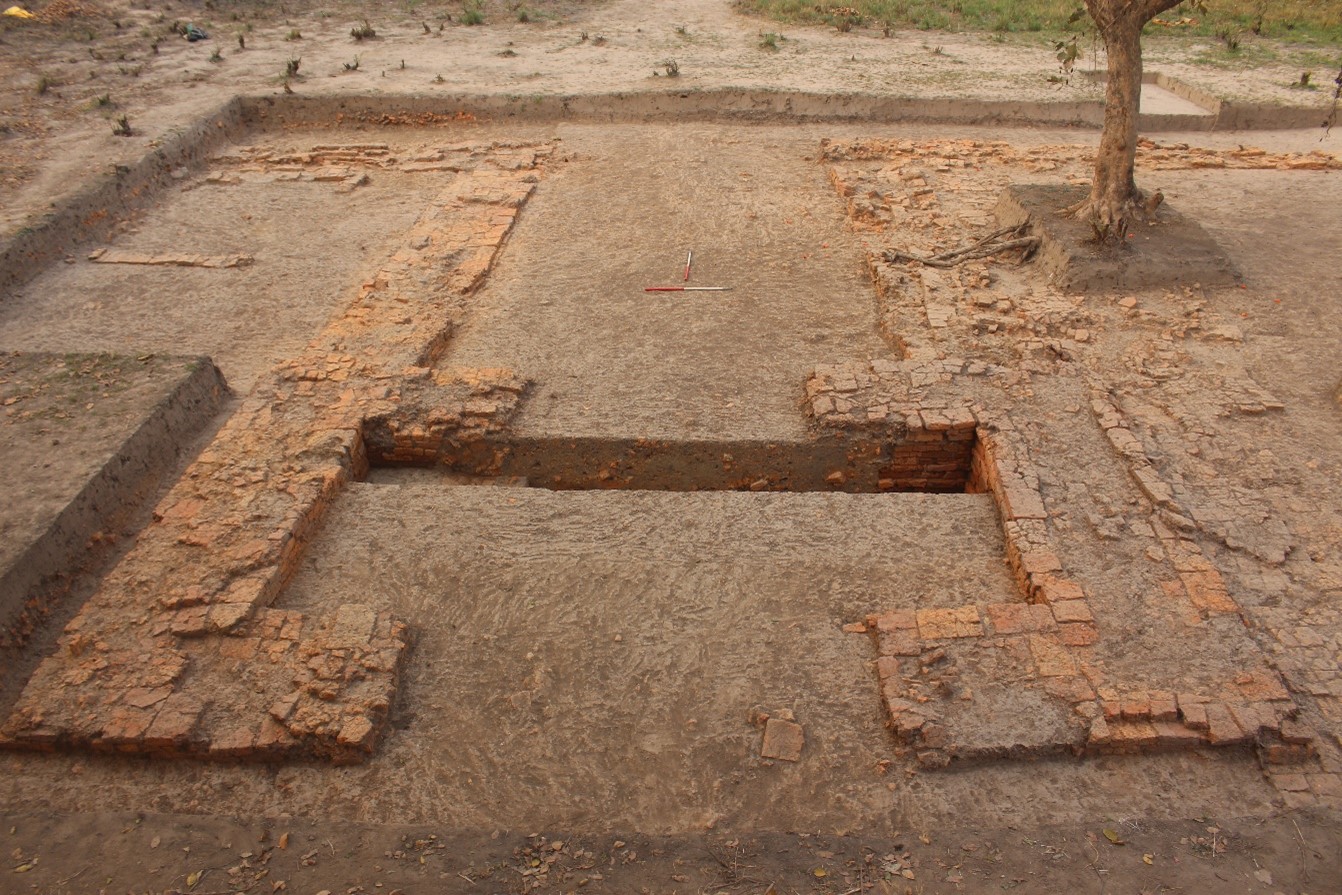 Pilgrimage is one of the fastest growing motivations for travel with an estimated 600 million ‘spiritual voyages’ undertaken each year. The Asia Development Bank (ADB) predicts that Buddhist pilgrimage to South Asia will reach an annual figure of 22 million by 2020, from a current figure of four million. At the site of Lumbini, the birthplace of the Buddha, located in Nepal’s Western Terai the figure is predicted to expand from 800,000 in 2014 to five million by 2020. Aware of the economic potential of the development of the Buddhist pilgrimage circuits, ADB has invested millions of dollars in a 'Tourism Infrastructure Development Project' targeting mainly in northeast India but also Nepal’s Terai.

For the ADB “tourism development can create expanded economic opportunities, generate employment and incomes, and promote infrastructure development," and "increased tourism... can also contribute to mutual understanding and development of a stronger sense of community among the countries and peoples of the region". This is shared by the World Bank's Buddhist Circuit Strategy which stressed that pilgrimage will deliver "sustainable and inclusive economic growth" and that "benefits reach deep into local households" (IFC/2013). But neither project offered tools for measuring benefits or identified negative impacts. UNESCO's approach to UN Sustainable Development Goals state "Culture contributes to poverty reduction and paves the way for a human-centred, inclusive and equitable development". However, whilst heritage tourism is often seen as beneficial for national economies the outcomes are less certain for residents and stakeholders. Most on-going projects do not offer tools for measuring the benefits of development or identify negative impacts for these local communities.

The project successfully mobilised a multi-disciplinary network of academics and practitioners from across South Asia and the UK, including archaeologists, historians, philologists, conservators, architects, environmental scientists, heritage managers, planners, engineers and economists. Through interaction with, and feedback from, local stakeholders, community leaders and administrators the participants co-produced resolutions for the enhanced protection and rehabilitation of heritage in the face of accelerated development, as well as benchmarks for recording socio-economic impacts. These results have been bolstered through community scoping to understand the impacts of archaeological investigations and development projects for local communities. Furthermore, heritage festivals and museum exhibits have been co-curated with resident communities to showcase and celebrate their local crafts and intangible traditions as well as help co-develop educational programmes and school competitions that promote inclusive heritage and raise awareness for the protection of heritage. 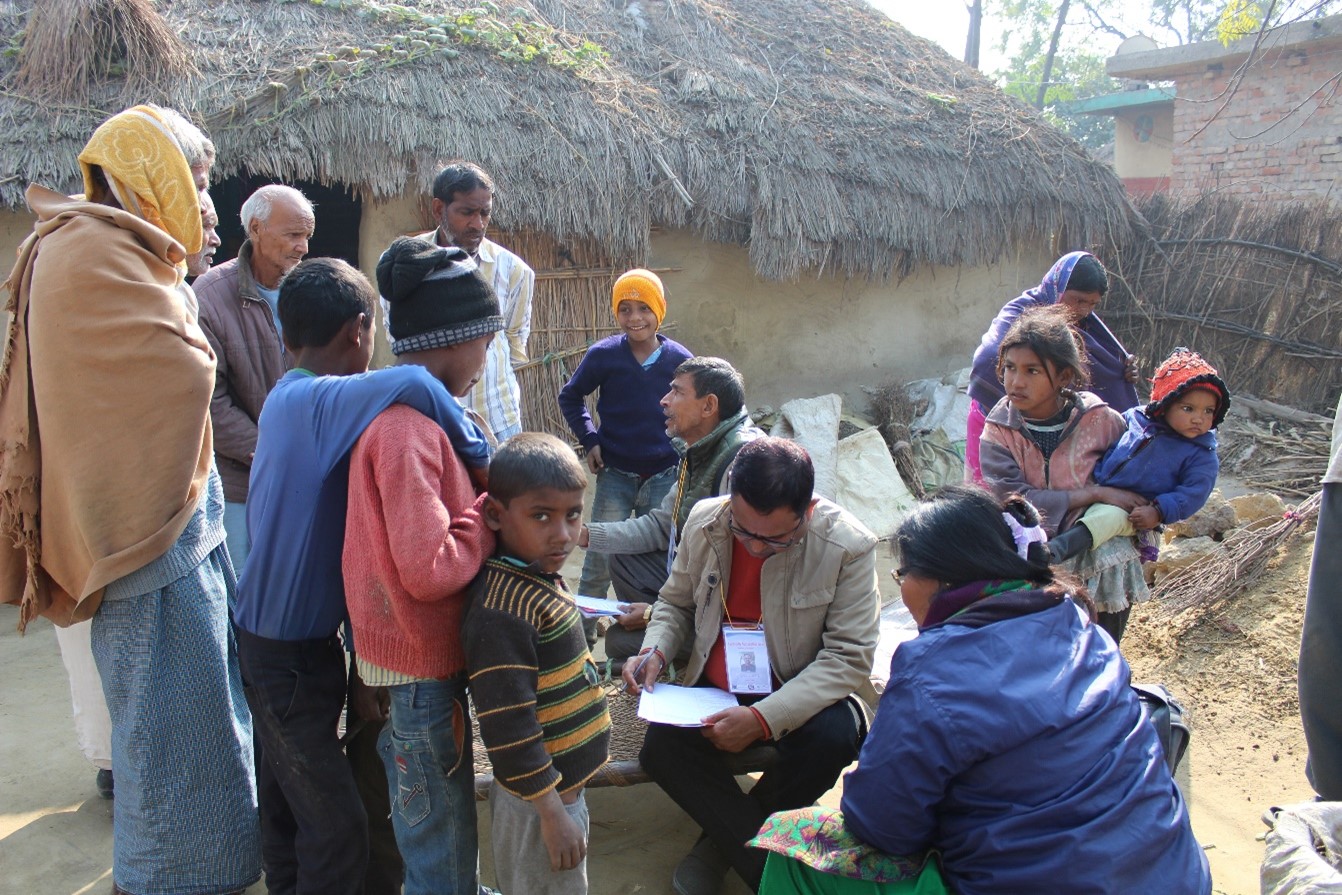