Located in the foothills of the Himalayas, Nepal’s Kathmandu Valley is home to unique monuments of carved wood, brick, tile and stone. Attesting to the collective artistic and architectural ingenuity of the Valley’s inhabitants, the majority of these standing remains date from the sixteenth century onwards. Kathmandu’s medieval cities and shrines are exceptional architectural and artistic achievements with traditions of seismic adaptation. They host urban infrastructure of tangible and intangible value and play vital roles of cohesion in the life of thousands and represent portals where the heavens touch earth and people commune with guiding deities. Previously generating 7.6% of the country’s Gross Domestic Product through tourism, Kathmandu’s iconic skyline was dramatically altered by the Gorkha Earthquake in 2015. The UNSCO Chair’s work in Kathmandu began as archaeological assessment at the World Heritage Site of Pashupati, but rapidly transformed into a program of post-disaster rescue archaeology translating into heritage resilience. 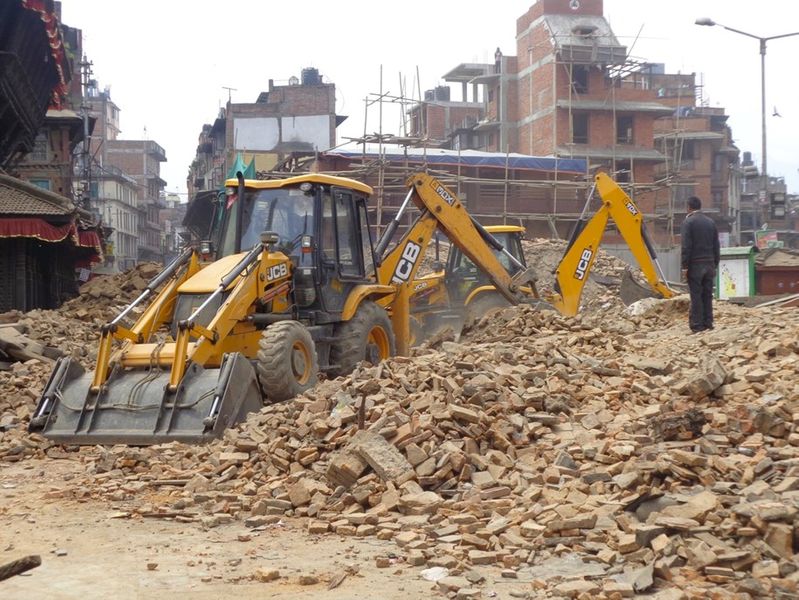 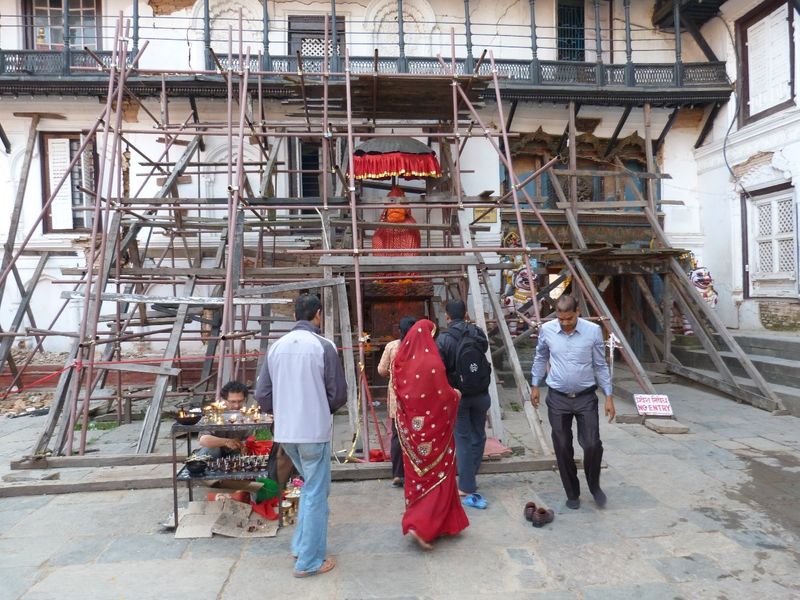 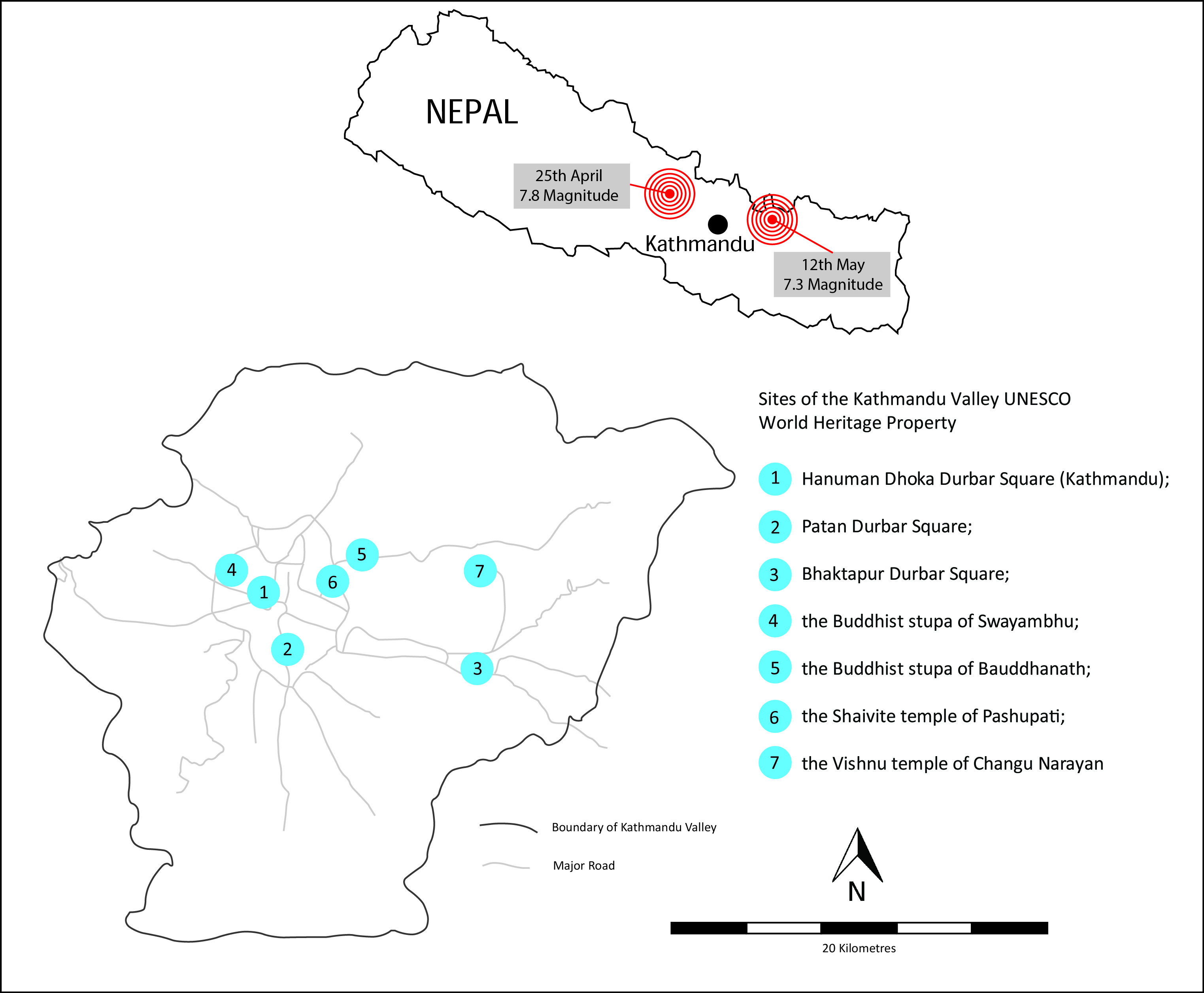 Image: A map of World Heritage Site properties within the Kathmandu Valley

The two major earthquakes that struck Nepal on the 25th April and the 12th May 2015 caused a human catastrophe, devastating large areas of the county and neighbouring regions, leading to substantial loss of life and livelihoods as well as post-disaster physical and mental trauma. This natural disaster and associated aftershocks also generated a cultural catastrophe, damaging and destroying much of Nepal’s unique cultural heritage, including monuments within the Kathmandu Valley’s UNESCO World Heritage Site of Universal Outstanding Value. Not only beautifully ornate temples of wood, brick and tile, the monuments of the Kathmandu Valley represent a major source of income and economic growth through international and national tourism and are a key component of Nepal’s fragile economy as one of the country’s major sources of foreign currency. Furthermore, these sites play a central role in the daily lives of thousands, representing portals where the heavens touch the earth and where it is possible for ordinary people to reach out and commune with their guiding goddesses and gods – they are of intangible value.

For these reasons, the damaged heritage sites of Nepal are subject to a major program of consultation, reconstruction and conservation. Prior to rebuilding, an international team of archaeological and architectural experts from the Department of Archaeology (Government of Nepal) and Durham University, along with partners, including the University of Stirling, M.S. University of Baroda, Austrian Academy of Sciences, University of La Trobe and Pashupati Area Development Trust, implemented multi-disciplinary evaluations and assessments of collapsed monuments within the damaged Durbar, or palace, Squares of Patan, Hanuman Dhoka and Bhaktapur as well as the temple complex of Pashupati.

Through a combination of Ground penetrating Radar Survey and excavation, the team identified earlier phases of subsurface heritage below the current open spaces of the Durbar Squares. These results were used to create Archaeological Risk Maps of the heritage, providing a detailed layout of archaeological features such as walls and buildings, which is critical for guiding the placing of new amenities, especially those broken during seismic events. Excavations have also indicated earlier phases of monumental construction, as well as the traditional techniques and seismic resilience of monument foundations within the Kathmandu Valley. Furthermore, these sequences have been linked to scientific dating programmes, which have pushed back dates of monuments by hundreds of years, including the Kasthmandap, the eponymous monument of Kathmandu, which was traditionally dated to the twelfth century AD, but is now known to have its first foundations built in c. 700 AD. 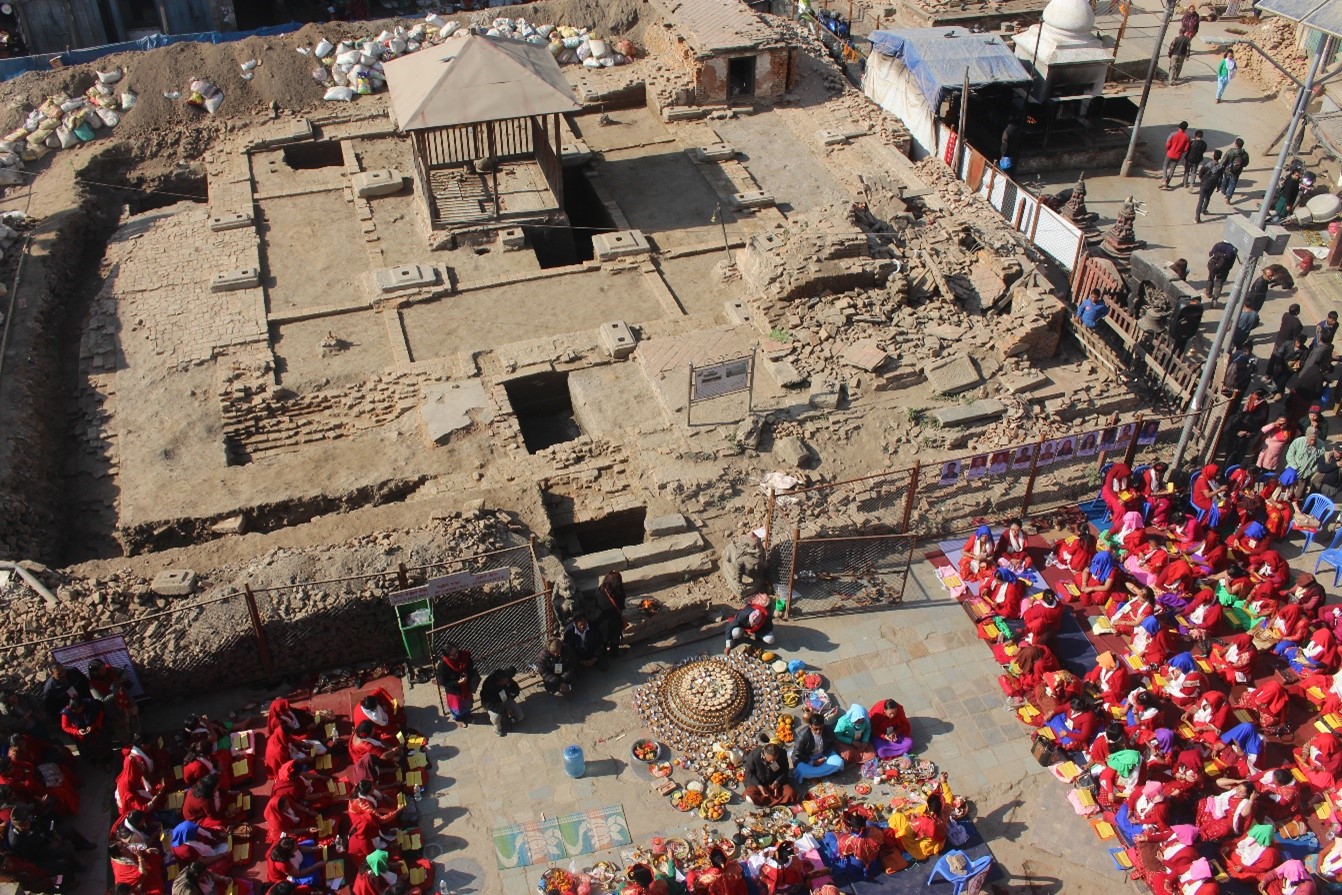 Image: Worshippers gather at the Kasthamandap in Kathmandu to re-venerate the monument after its collapse

The British Academy, on behalf of the UK's National Academies, launched a new, competitive research funding call, the Cities & Infrastructure Programme, as part of the Global Challenges Research Fund in 2017. Supporting cutting-edge research that is challenge-led and interdisciplinary; these calls looked to strengthen capacity for research and innovation within both the UK and developing countries; and providing an agile response to emergencies where there is an urgent research need.

From our post-disaster research in Kathmandu, it was clear that many risk reduction strategies were demolishing historic structures and rebuilding in modern materials. A threat to authenticity, there was no research on the seismic adaption of old or new structures, and historic fabric was being destroyed without recording.

In response, we co-developed a ‘heritage ecosystem’ approach by combining geotechnical and structural engineering with (geo)archaeological outcomes from two post-disaster missions within Kathmandu. We conducted more detailed building and ground penetrating radar surveys to evaluate the foundation depth and seismic vulnerability (and to ensure consistency with analysis of geotechnical core). Our team assessed historic construction practice, and traditional construction ability, and will attempt to map these onto rebuild initiatives with the objective of improving, and where appropriate, blending with modern low interventionist retrofitting strategies. We analysed construction materials (introduced cultural soil foundations, brick/mortar and timber attributes), augmented by re-analysis of soil cores to model site amplification/earthquake motion.

As many superstructure plans are incomplete, we also generated 3D reconstructions from Multi-View Stereo/Structure-From-Motion photogrammetry with other contextual information integrated into a modified Potree viewer, combining extant photographic records, crowd-sourced imagery and web-scraping. Vernacular system partners contributed to the evaluation of seismic performance, damage and progressive deterioration from shock and aftershock sequences. We also evaluated maintenance flaw impacts and timber failure patterns compiled during earlier missions. In addition talked to residents, craftspeople, tour operators and businesses to map and promote each monument’s traditional processes of procurement, construction, recycling and maintenance, and their intangible value as well as patterns of visitor spend and behaviour.

The co-produced expertise, methodology and its results have now been passed on to government, donors and contractors on rebuild strategies, and are directly informing the reconstruction of the Kasthmandap. 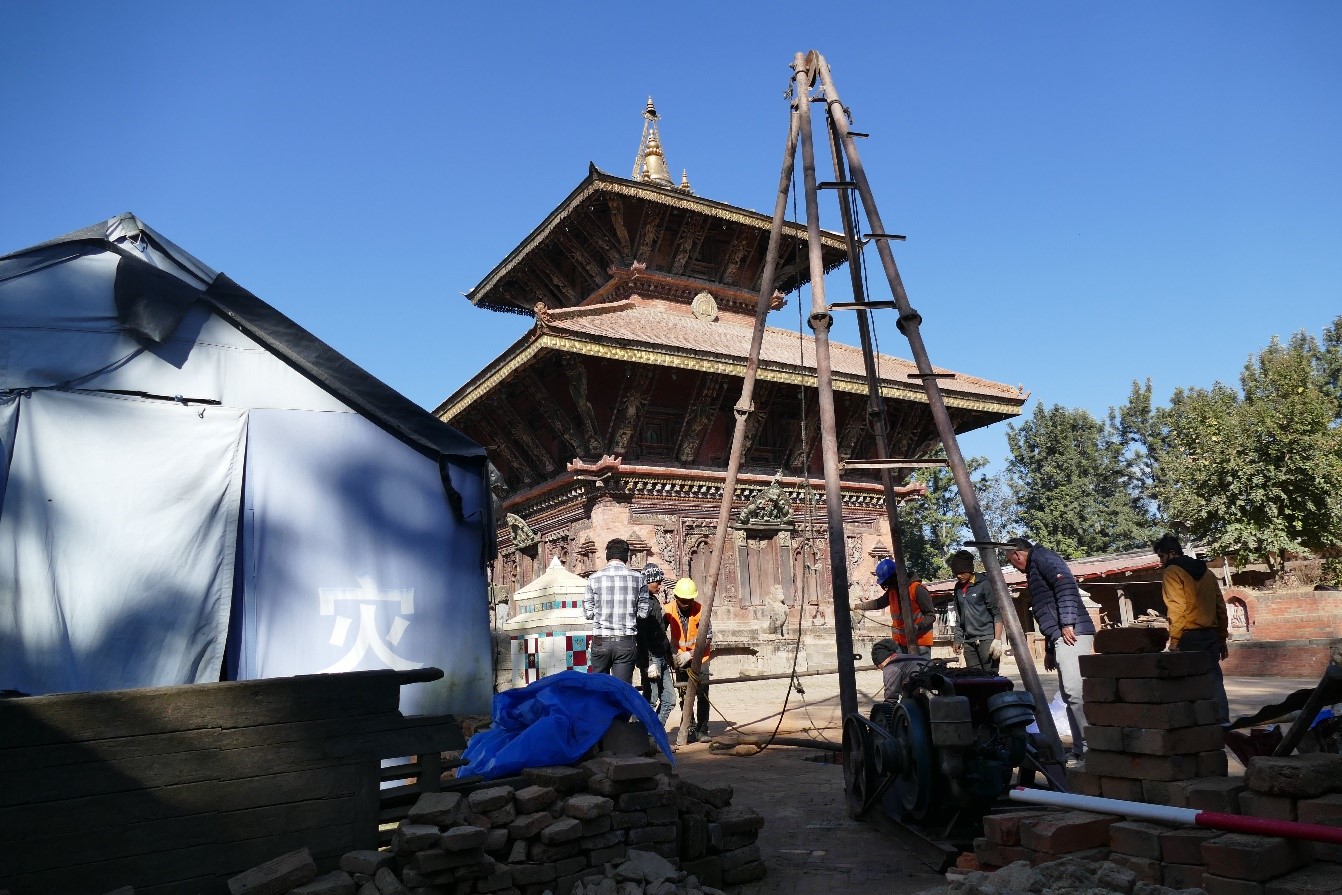