Durham University undertakes a broad range of projects involving animals, including licensed, laboratory based research and observational research. Examples of our current research involving animals are below: 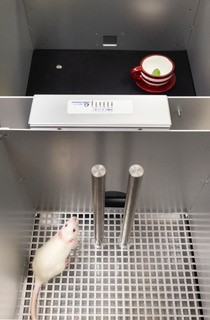 By developing and utilising new behavioural tasks for rats, the ‘Memory in the Rat’ project is enabling experts in the department of Psychology to increase our understanding of how memory is stored and maintained in the brain. Researchers are using the tasks to assess types of memory that are critically impaired in disorders such as Alzheimer’s disease and in ageing, and to make careful and selective damage to particular systems in the brain to test hypotheses about how these systems store and represent different types of memory.

By understanding how and where in the brain specific types of memory are stored, we can better target drug therapies to these regions, increasing our chances of being able to improve memory in our old age and in disorders where memory becomes impaired (such as Alzheimer’s disease).

This 5 year project (2015-2020) is funded through an InnovateUK grant with Campden Instruments and the NC3Rs CRACK IT scheme, which has enabled researchers to develop a new apparatus for behavioural testing. This has significantly reduced the number of animals needed, as well as improving the reliability of the information gained from the tests, providing better understanding of the processes underlying memory.

Case Study: Understanding how we learn 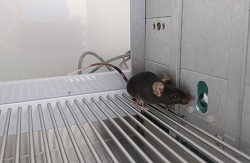 Experts in the Department of Psychology are investigating the psychological processes and neural bases of learning and memory. The ‘Time-dependent mechanisms in learning and memory’ project will help to identify the psychological mechanisms responsible for long-term and short-term memory and how these processes influence the strength and nature of learning. It will also investigate the brain areas that are important for these processes and look at the role of particular receptors in these areas.

The project will provide information that will advance our knowledge of how learning is achieved in the brain. In addition, identifying the psychological processes and parts of the brain responsible for normal cognition will aid our understanding of abnormal cognitive processes that occur in neuropsychiatric diseases.

This five year project (2018-2023) has received funding from BBSRC, Royal Society, and Experimental Psychology Society and will involve rats and mice.

Multidisciplinary projects, spanning chemistry and biology and involving scientists from Durham University working with both national and international collaborators, aim to find new therapeutics for leishmaniasis, a neglected tropical disease.

World Health Organization figures state that >350 million people worldwide are at risk from leishmaniasis. Around ~12 million people are infected, resulting in a substantial economic burden (over 2 million working life years lost) across the developing world. However, the true burden of disease is even greater. Those most at risk include the world’s poorest communities, where access to healthcare is limited, and where these clinically complex infections are often misdiagnosed and under-recorded.

Visceral leishmaniasis is lethal if not treated. Cutaneous and muco-cutaneous leishmaniasis is not lethal, although the scarring from these lesions destroys lives for ~40 million sufferers through social stigma, reducing opportunities for education, employment, even marriage, and affecting mental health.

Current treatments for leishmaniasis involve costly chemotherapeutics with toxic side effects that are themselves lethal for some patients. However, although patients with visceral disease will die without treatment, this month-long regimen which leaves them sick and unable to work is too costly for people in poverty. In addition, some parasite strains are becoming resistant to these drugs. The need for new drug treatments with new modes of action is both obvious and urgent.

One project involves scientists from both Durham University and the Federal University of Rio de Janeiro, Brazil. All forms of leishmaniasis are present in Brazil. Outbreaks are most frequent in remote rural areas, where poor sanitation and malnourishment can enable the disease to become locally severe. In addition, pressures for urbanisation in this rapidly developing country have triggered mass movements of people, some carrying the disease, from rural areas into overcrowded city communities – where new outbreaks can arise.

This project aims to:

The five-year programme of research (2017-2021) is supported by the Royal Society and the Global Challenges Research Fund (GCRF). The project team are also all members of the Durham-led, GCRF Global Network for Neglected Tropical diseases https://ntd-network.org.

An example of drug development

A related project is taking forward development of two specific compounds. Significant preparatory work is undertaken using in vitro models before any work with animals takes place. There is not yet an effective replacement for animal models for testing the efficacy of potential drugs in the later stages of their development.

Work at Durham University has identified one enzyme, the essential Leishmania IPC synthase (IPCS), as a good potential drug target. Funded by the Open Lab Foundation, scientists from the University and a pharmaceutical company, GSK, have collaborated to develop a robust system for drug assessment suitable for ultra high-throughput screening. Using in vitro models to test agents which inhibit IPCS, researchers identified 5 non-toxic antileishmanials with drug potential. Of these, 2 related nitro compounds demonstrated the most favourable properties for further development. Analyses supported by the current funding demonstrated the need to adjust these compounds to improve absorption by the body before experiments with animals take place. This has been achieved and now the efficacy in an animal (mouse) model of disease must be established. One of the compounds will soon be tested in infected mice by collaborators at the London School of Hygiene and Tropical Medicine. 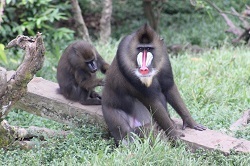 Our project “Selection to Outsmart the Germs: The Evolution of Disease Recognition and Social Cognition” aimed to test whether mandrills use visual, acoustic, or olfactory cues to recognise when conspecifics are infected with parasites (“disease recognition”).

Mandrills are large monkeys that inhabit the dense equatorial forest of Central Africa. They live in unusually large groups with complex sociality which is thought to have selected for their multi-modal signalling. The mandrill signalling system integrates visual, acoustic, and olfactory cues, each of which modalities could convey infection status, making them an excellent study species for this project.

We studied a semifree-ranging colony of mandrills at the Centre International de Recherches Médicales, Franceville (CIRMF), Gabon. We took digital photos, recorded vocalisations, and collected faecal samples, ectoparasites, and odour samples from mandrills in a semi-free ranging colony in Gabon before and after they were treated with anti-parasite medications as part of their routine annual health checks.

Mandrills are listed as vulnerable on the 2015 IUCN Red List. This project does not use any wild mandrills and will not affect wild populations. However, our findings may lead to improvements in our understanding of disease transmission, and more efficient conservation initiatives.

This project is led by Prof Jo Setchell (Durham University) and Dr Sharon Kessler (Stirling University, previously at Durham) in collaboration with expert primate veterinarians at CIRMF, Gabon, parasite ecologists at the Institute of Vertebrate Biology, Czech Academy of Sciences, experts in chemical communication at Wolverhampton University, and experts in ectoparasites at Georgia Southern University, USA. The mandrill colony is maintained by the Primate Centre, CIRMF, Gabon. Data collection was funded by a Marie SkÅ‚odowska-Curie Action, a Durham University Capital Equipment grant and a Durham University seedcorn grant. Data analyses are ongoing.

The researchers discovered a new type of spatial neuron, which remembers how far away and in what direction key objects are located, in the subiculum. Lord Winston, Professor of Science & Society at Imperial College London, said “This discovery gives a possible insight into certain kinds of dementia which are now of massive importance. The idea that loss or change of such cells might be an early biomarker of disease could lead to earlier diagnosis and more effective therapies for one of the most intractable medical conditions”.

This five year project (2018-2023) has received Research Grant funding from the BBSRC. This enables the Neuraclin conference, which aims to bring together researchers and clinicians, and research on animals and humans, on topics such as Alzheimer’s disease and Epilepsy.