My research and teaching interests broadly cover the political, cultural and intellectual history of Britain and Continental Europe during the period c.900-1250 AD, with particular focus on exploring perceptions of the past and theories of history-writing from Antiquity to c.1200.

I completed my PhD at Durham University in 2014. Until summer 2016, I worked as Arts and Humanities Research Council Cultural Engagement Fellow at Durham, on a project titled ‘Singing the Past to Life’, with partner organisation, Cantata Dramatica. Amongst our outputs is an original sung drama based on the life and medieval cult of St Cuthbert in Durham, which premiered in Durham Cathedral as part of Durham Vocal Fest in February 2019.

Between 2013 and 2016, I led a collaborative research group on the Anglo-Norman historian, Orderic Vitalis, part funded by the Royal Historical Society and Durham’s Institute for Medieval and Early Modern studies. The project came to completion in October 2016, through the publication of the volume: Orderic Vitalis: Life, Works and Interpretations (Woodbridge: Boydell Press). 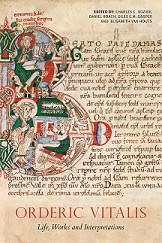 My current book project explores the writing of history and uses of the past within the community of St Cuthbert c.850-1150 (York Medieval Press). I continue to develop my work on medieval perceptions of the past, and have published articles on the works and methods of Orderic Vitalis, Symeon of Durham, and Eadmer of Canterbury. My next major project explores links between the role of the historian and the monastic/cathedral cantor in the early and high Middle Ages.

I am a member of the Charles Homer Haskins Society for history and cultures of peoples in northwest Europe in the early and central Middle Ages, and I am Assistant Editor of the Haskins Society Journal.

I welcome enquiries from students interested in studying intellectual, cultural and political history in medieval Britain and Europe to c.1200. I have particular expertise medieval monasticism and in the writing of medieval history and hagiography, for which there are excellent resources available in printed and original manuscript forms at Durham's Cathedral and University libraries.