Karl graduated with a First Class Chemistry degree and PhD from Leicester University, held an individual Marie Curie Research Fellowship in Strasbourg, France then a Royal Society University Research Fellowship in Chemistry at the University of Oxford. He joined Durham Chemistry in 2004 and was promoted to a Reader in 2010 and Chair in 2012. Karl has held a number of leadership roles including Director of Research in the Chemistry Department and has been Head of Department since August 2017. He represents the Faculty of Science on Senate Agenda Setting Committee.

Karl’s research is focussed on nanomaterials in particular the chemistry of graphene and carbon nanotubes. His work has been recognised with numerous awards, including the international Royal Society of Chemistry Entrepreneur of the Year Award 2011 for his work on graphene, the Times Higher Education Research and Innovation Award 2012 and more recently the Royal Society of Chemistry 2017 Materials for Industry – Derek Birchall Award . He has served as Chair of the Chemical Nanosciences and Nanotechnology subject group of the Royal Society of Chemistry (2016 - 2021) and is an expert member on committee AMT/009 in the BSI, the UK national standards body. Karl recently completed a 5-year term (ended 2019) as a Member of the Digital Programme (formerly Innovation, Research and Development) Expert Group, operated by the UK Government Department for Business, Energy and Industrial Strategy. This involved overseeing progress and offering strategic direction for a number of research programmes across the National Measurement System (NMS) remit (of which the National Physical Laboratory is part).

Karl is the editor of the Elsevier journal FlatChem: Chemistry of 2D Materials and sits on the editorial board of the scientific journals Crystals, ISRN Nanotechnology and the Journal of Carbon Research. Karl established the successful Durham University spinout company Applied Graphene Materials in 2010, which is now listed on the FTSE AIM index, and he is currently the Chief Scientific Officer.

The group’s research interests are in the field of nanomaterials and nanotechnology. Nanotechnology is the science of creating structures or materials on a nanometre (one millionth of a millimetre) scale. Interestingly, the fundamental physical and chemical properties of materials are altered as they are decreased to the nanometre scale. Therefore, nanostructured materials offer great potential in the development of new electronic devices, bio-sensors and high strength composites. Our work in this area involves, amongst others, the synthesis and chemistry of graphene and carbon nanotubes. We use chemistry to improve the compatibility and dispersion in a range of matrices to facilitate the use of nanocarbons in a range of applications including advanced composites and coatings.

Synthetic procedures within the group often involve sensitive materials which are handled using inert atmosphere glove-box or Schlenk line techniques. As well as making use of the more routine analytical techniques to characterise the materials, such as NMR spectroscopy and mass spectrometry, the group makes extensive use of scanning probe microscopy (SPM), transmission electron microscopy (TEM), scanning electron microscopy (SEM), Raman spectroscopy and X-ray photoelectron spectroscopy (XPS). An outline of some of our interests are given below.

Graphene is single layer of carbon atoms arranged in a continuous honeycomb network and is the latest addition to the nanocarbon family. This 2D nanostructure, best visualised as single layer of graphite, shares the exciting properties of other carbon nanomaterials. Like carbon nanotubes, which can be considered to be a rolled up sheet of graphene, the material has exceptional electrical, thermal and mechanical properties. As a result various applications in materials science including polymer nanocomposites, energy storage materials, transparent thin film electrodes and nanoelectronic components have been envisaged. It has even been suggested that graphene could outperform carbon nanotubes in some of these applications.

One of the problems in graphene research is the availability of the material and the difficulties involved with its synthesis. These issues need to be solved if the applications listed above are to be made viable. Our interests lie in the synthesis of graphene using a variety of methodologies that are scalable and selective for the formation of graphene or few-layer graphene. We are particularly interested in producing graphene foams for energy storage applications where pore size can be controlled.

We are also investigating methods of chemically functionalising graphene to improve and control dispersion in aqueous and non-aqueous solvents. We are particularly interested in using graphene and chemically modified graphene in applications such as coatings and composites. 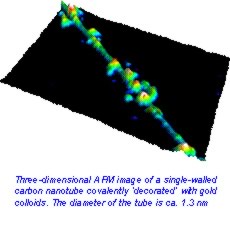 Single-walled carbon nanotubes (SWNTs) have attracted interest and excitement across a broad spectrum of sciences from engineering, materials, chemistry, biology to medicine. Single-walled carbon nanotubes can simply be thought of as a rolled up single sheet of graphite joined at the edges. They are immensely strong with a strength similar to that of steel and can be metallic or semi-conducting depending on their structure. Such impressive mechanical and electronic properties have opened the way for the development of new technologies. However, many possible applications of nanotubes, from use as components in electronics to chemical and biological sensors, can only be realized through chemical control.

We are currently investigating methods of chemically functionalising the carbon nanotubes to: