Last week we joined Durham Parish Council to unveil the restoration of a mural at Ruth First House.

The mural is dedicated to Ruth First, who was a famous anti-apartheid campaigner, writer, journalist and Sociology lecturer here at Durham University in 1973. The building is where Ruth used to undertake political work.

The original plaque and artwork were erected to coincide with the first free democratic elections in South Africa in 1994. The City of Durham Parish Council recently commissioned the restoration of the mural by one of the original artists Lotte Shankland. This was unveiled by Ruth’s former University colleague Hilary Wainwright and the current Ruth First Scholar Shamiso Zamba. 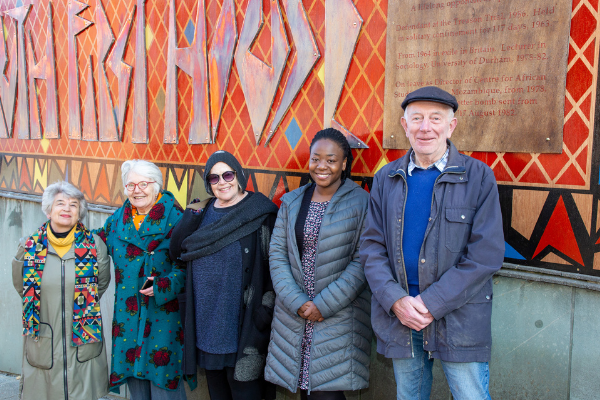 This year marks the 40th anniversary since Ruth First’s assassination in Mozambique in 1982, where she was working while on leave from Durham University. The restoration of the mural is one of the events planned for this year to commemorate Ruth’s life.

Ruth First’s teaching, research, writing and political activism have inspired many people in Africa and the UK. The University is proud to honour that legacy by supporting the Ruth First Scholarship in partnership with the Ruth First Educational Trust and Durham City and County.