The installation of the plaque was instigated by the Women’s Banner Group formed in 2017 with a view to providing a space for women in the historic Durham Miners’ Gala. Its research highlighted many female firsts at Durham, including:

The Women’s Banner Group embarked on a mission in 2018 when they discovered there were no blue plaques commemorating women in County Durham, but over 30 for men and buildings. Thanks to them, today there are now eight blue plaques remembering women, with more to come.

In addition to the unveiling, two St Hild & St Bede students, Courtney Power and Laura Wildgoose, researched the history of the three graduates in the wider context of the women of St Hild’s College. They created information displays on their findings which were launched at the unveiling on 19 November. The College of St Hild & St Bede is planning a further display and exhibition of artifacts associated with St Hild’s College in 2023. 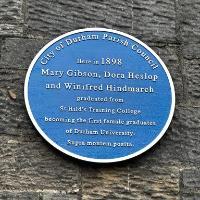 A blue plaque is a permanent historical marker displayed in a public place to commemorate notable people, events, or buildings. Blue plaques across the UK were inspired by the original scheme in London founded in 1866 by English Heritage.