MPs use emotive rhetoric to sway voters in high-profile debates

Covering two million parliamentary speeches held in the UK House of Commons and the Irish Parliament, Professor Sara B. Hobolt (LSE), Dr Moritz Osnabrügge (SGIA), and Dr Toni Rodon (UPF) use a dictionary-based method to measure emotive rhetoric. They show that emotive rhetoric is more pronounced in high-profile legislative debates, such as Prime Minister’s Questions, illustrating that emotive rhetoric is one of the tools politicians can use strategically to appeal to voters.

‘Do not the British people deserve a Prime Minister they can trust, not a Government who are mired in sleaze, cronyism and scandal?’ Keir Starmer bellows from the dispatch box. The Prime Minister retorts: ‘Week after week, the people of this country can see the difference between a Labour Party that twists and turns with the wind and thinks of nothing except playing political games, whereas this party gets on with delivering on the people’s priorities, and I hope the people will vote Conservative on 6 May.’

It is a familiar scene in the House of Commons on a Wednesday afternoon. Emotions running high during Prime Minister’s Questions (PMQs) as Keir Starmer and Boris Johnson attack each other across the Commons floor. The debate that follows their exchanges is similarly passionate and at times ill-tempered. However, not all parliamentary debate is conducted this way. Some of the exchanges are calm, even-tempered, filled with technical discussions about policy details. So, why do politicians sometimes make use of highly emotive rhetoric and other times speak in more technical and neutral terms? This is the question, we have examined in an article recently published in the American Political Science Review.

All the way back to Ancient Greece, politicians have used different modes of persuasion. Aristotle famously distinguished between the use of ethos, logos, and pathos to convince audiences. While ethos refers to ethical appeals, logos to reason and logic, pathos is an emotional appeal to the audience to incite anger or enthusiasm among those listening. A number of studies have shown that emotional appeals can be an effective persuasive tool for politicians to convey messages and influence voters. For instance, it has been shown that individuals who feel happy are more likely to be persuaded by politicians, independent of the strength of the argument.

So, do MPs deliberately make use of emotive rhetoric to persuade voters when making speeches in the House of Commons? If they do, we would expect that speeches made in high-profile debates, such as the PMQs – with extensive media coverage and a large potential electoral audience – would be far more emotive than speeches that receive little attention from the media and the general public.

To explore whether this is the case, we analyse a million parliamentary speeches held in the House of Commons between 2001 and 2019. Using a well-established dictionary of emotive language (Affective Norms for English Words) expanded to include context-specific words (using word-embedding techniques), we were able to identify ‘emotive’ as well as ‘neutral’ words. Figure 1 shows highly emotive words from our dictionary. Emotive words are words such as worthlessness, appalling, endured, inspiring and applauded. In contrast, neutral words include embankment, containers, onto, corrugated, infilling and diagonal. The level of emotive rhetoric in a speech can be measured as the percentage of emotive words minus the percentage of neutral words.

Figure 1: Highly emotive words used in the House of Commons 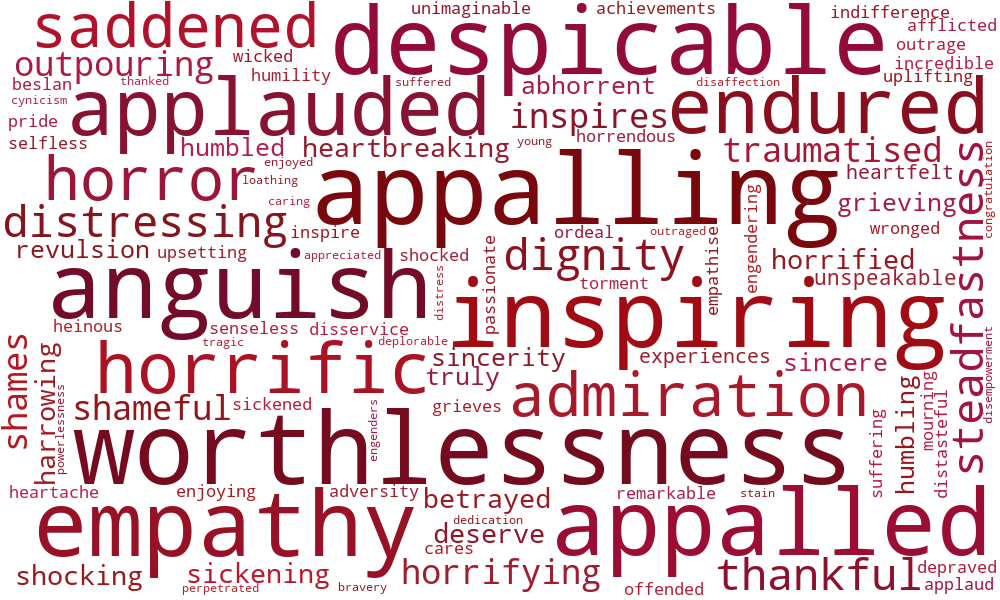 When do politicians use more emotive rhetoric? Figure 2 illustrates the average level of emotive rhetoric of parliamentary speeches held in PMQs and other Question Times in the period from 2001 until 2019. We compare these two types of debates, because they are similar in format yet differ in terms of their electoral audience. While few people are aware of ordinary Question Times, where departmental ministers are asked questions, PMQs is the most prominent parliamentary moment of the week, broadcast live and extensively covered by the media. Since PMQs is the debate citizens are more likely to be exposed to, this provides incentives to MPs to use more emotive language in their PMQs speeches than in other legislative debates. We see this confirmed in Figure 2, which shows that the average level of emotive rhetoric is significantly higher in PMQs than other Question Times. Also, the figure suggests that the level of emotive rhetoric in PMQs increases after the Iraq war began and the Brexit referendum (the two dashed lines). 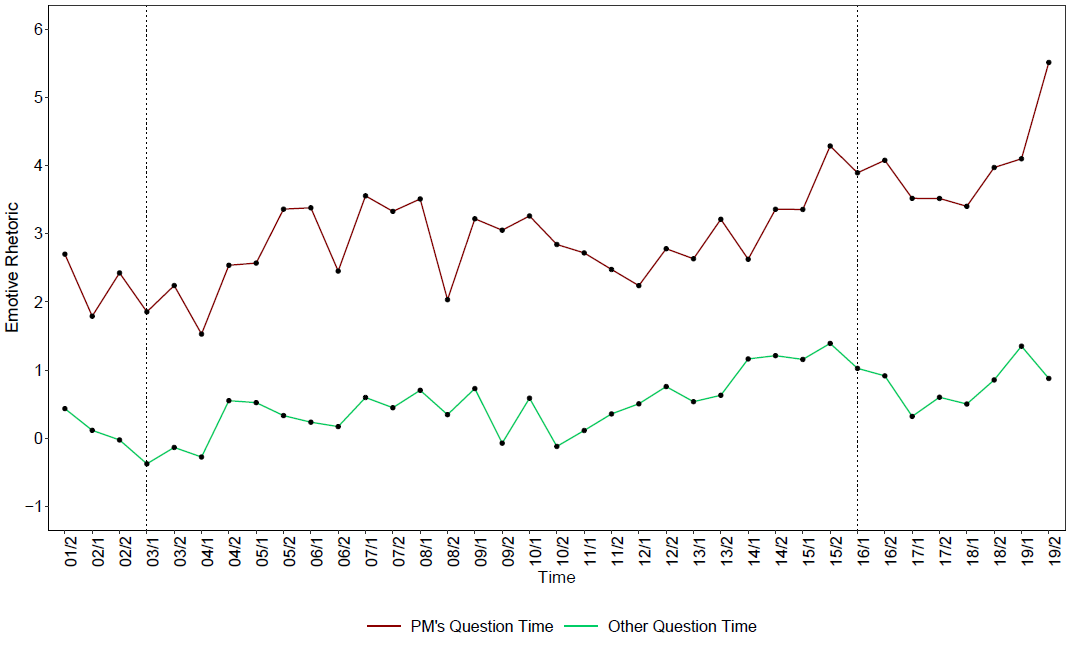 This suggests that politicians know when to employ ethos, logos, and pathos as modes of persuasion. Whereas logos may be most useful when addressing fellow parliamentarians in technical debates, pathos is a powerful tool when the electorate may be listening in.

Note: the above draws on the authors’ published work in the American Political Science Review.