Located in the heart of the Indian Ocean, Sri Lanka has been a focal point for maritime trade for  millennia. It is home to eight UNESCO World Heritage Sites, six cultural and two natural. The cultural sites chart the history of the island’s capital cities from Anuradhapura, Sigiriya, Polonnaruva to Kandy, as well as the temple site of Dambulla and the Dutch colonial fort at Galle. The island is multicultural, but with a traditional Buddhist predominance. However, religious and ethnic tensions have been rife in recent history, with an internal conflict raging from the 1970s until 2009. Archaeology, heritage and the question of who the “original” inhabitants of the island were often used as justifications for violence. This (mis)use of heritage had devastating consequences for civilians, tourism and buildings across the country, and reinforces the Chair’s remit for exploring the ethics of heritage.

As such, the UNESCO Chair teams have worked in and around the early capitals of Anuradhapura and Polonnaruva, transforming traditional narratives of social and political development. More recently, we have transposed the post-disaster methodology from Kathmandu into a post-conflict scenario at Jaffna Fort.

Exploring the Medieval Hinterland of Polonnaruva 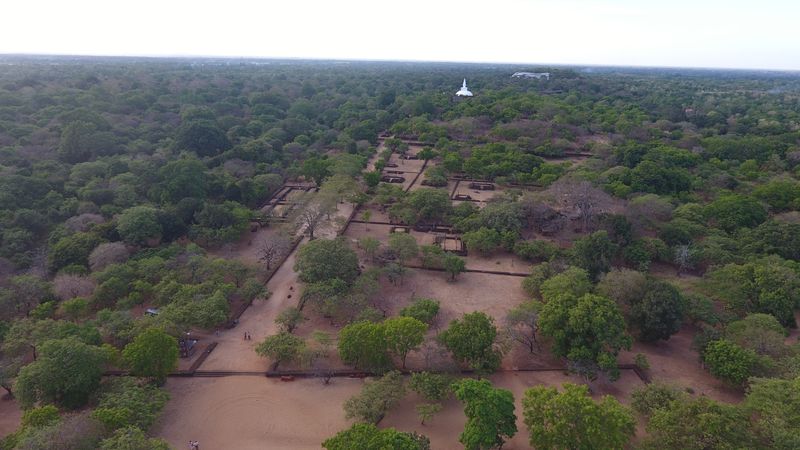 Post-Conflict Archaeology of the Jaffna Peninsula 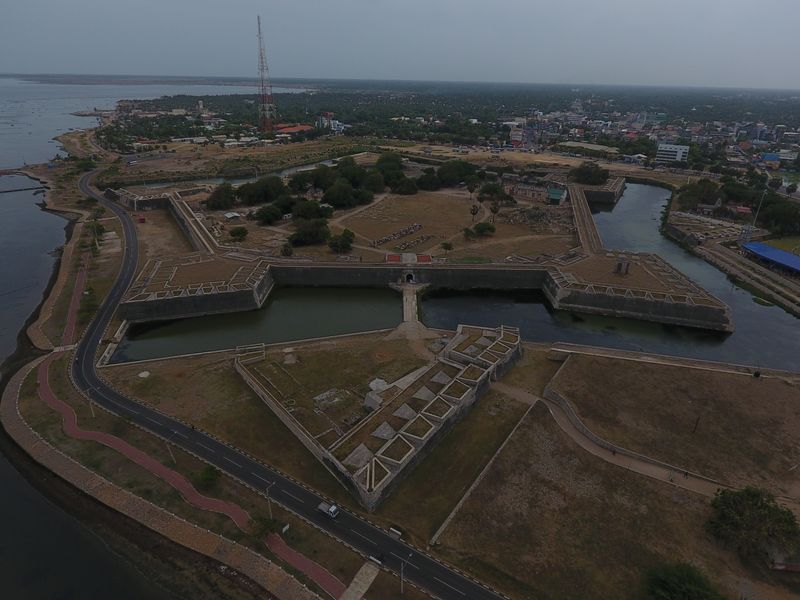 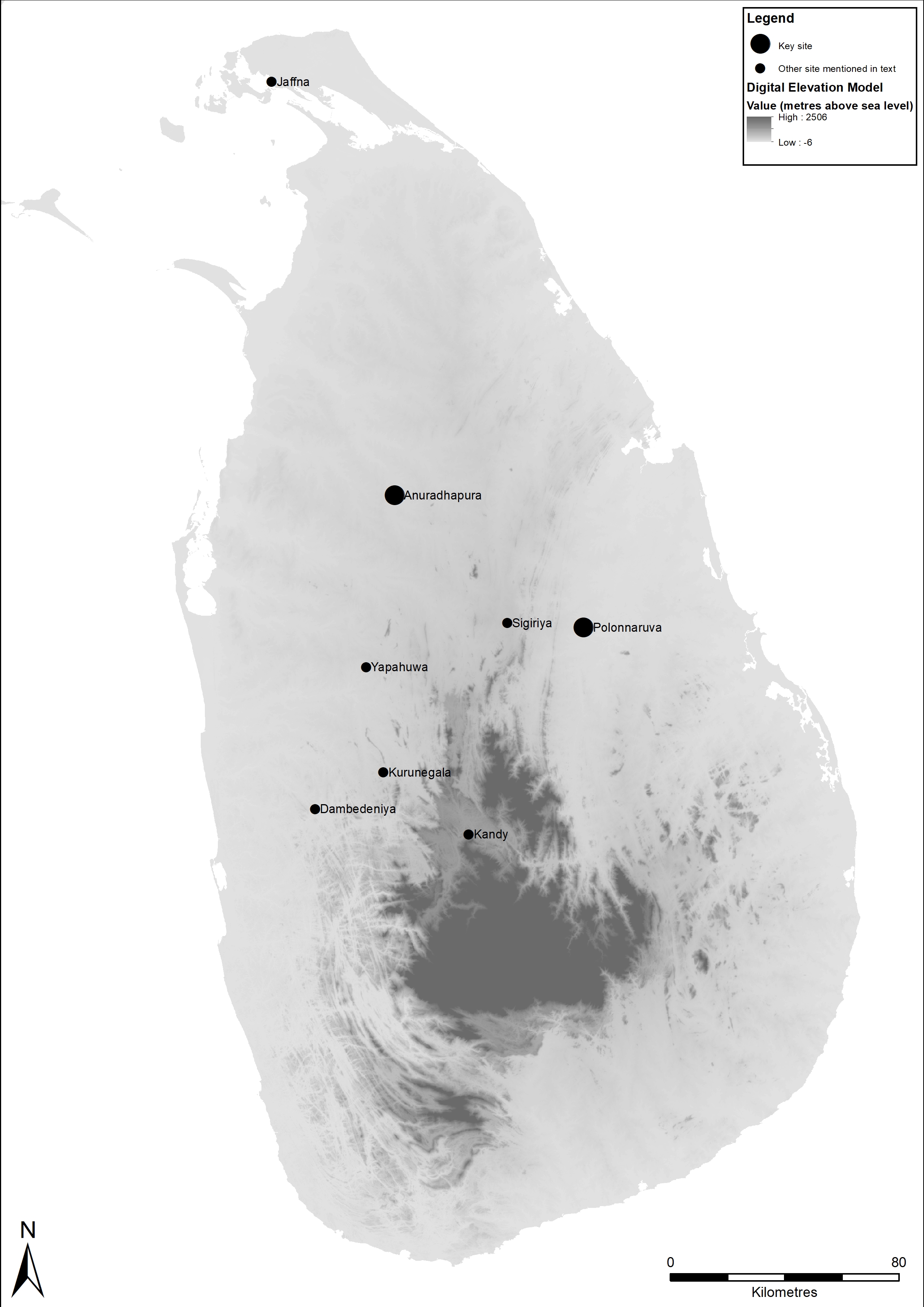 Exploring the Medieval Hinterland of Polonnaruva

Polonnaruva was the capital of Sri Lanka from AD1017 to 1293, and was a highly planned urban centre surrounded by a ring of religious monuments including Buddhist stupas and Hindu temples. However, we know very little of how the wider landscape was organised, and whether the highly formalised city was reflected by a formalised hinterland; and whether Buddhism, Hinduism and other religions also flourished outside the cosmopolitan urban core.

Research at the preceding capital, Anuradhapura, identified a very different archaeological settlement pattern than had previously been thought. In particular the notable absence of towns led the project team to suggest that monasteries played a dual role of religious and secular administrators within Anuradhapura’s hinterland - unique in South Asia. Anuradhapura was abandoned in the eleventh century AD and a new capital was established at Polonnaruva 104km away.

To date, two field seasons have been conducted at Polonnaruva: a pilot season of in September 2015, followed by a further field season in July 2016. In both instances, excavations were conducted within the city of Polonnaruva, whilst hinterland survey was undertaken in the surrounding landscape. The initial results show that there was a stark contrast in the size and morphology of sites when compared to those around Anuradhapura. At Polonnaruva, the ceramic scatters identified were much larger in size – on average 5,000 square metres (0.5 hectares) in size, and containing brick, tile, pottery and metalworking residues. A sample of auger-cores taken within three of the sites indicates they have occupation depths of over one metre, in comparison to about 20 centimetres at Anuradhapura. Immediately this suggests a very different landscape, with a shift from the mobile, peripatetic villages of Anuradhapura to a more permanent, and perhaps urbanised, landscape. The monastic sites surrounding Polonnaruva ranged from large complexes to small isolated (and often looted) stupas. The complexes were more formalised with defined boundary walls and brick and tile structures, as opposed to the organic monasteries at Anuradhapura. Again, this points towards a very different settlement system within the landscape, and one which was far more rigorously planned and administered from the centre.

Excavations at Siva Devale No.2 have confirmed that there was substantial industrial activity immediately outside the precinct wall, suggesting that polluting activities were undertaken outside this designated sacred space. It is also possible that such craft activity may have been related to a temple economy, where products for pilgrims, and possibly the surrounding area were producing goods as part of a redistributive network, perhaps similar to that encountered in the Anuradhapura hinterland in a role undertaken by Buddhist monasteries. 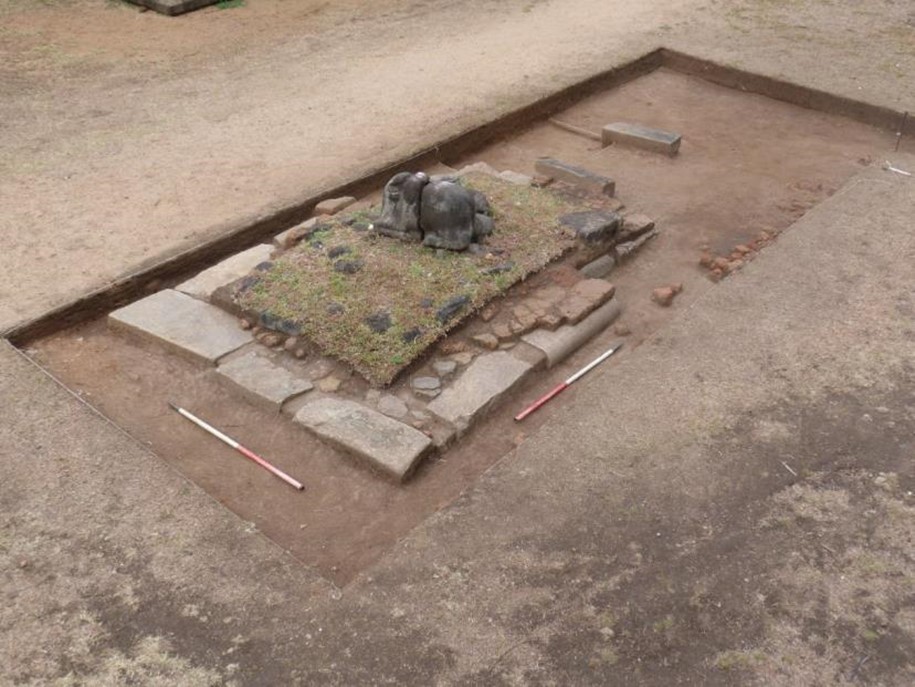 Image: Excavation of the nandi shrine at Siva Devale No. 1 in Polonnaruva

Post-Conflict Archaeology of the Jaffna Peninsula

Emerging from a 26 year conflict in 2009, the island of Sri Lanka is now addressing associated humanitarian and cultural impacts and establishing a roadmap to national reconciliation. Whilst post-conflict efforts have begun to address humanitarian challenges, damaged cultural heritage has only recently been appreciated for its potential contribution to post-conflict renewal, peace-building and economic development through national and international tourism (Pushparatnam 2014).

One monument badly affected during the conflict was Jaffna Fort, which had sections of its ramparts damaged and most of the structures within its 22 hectare interior destroyed. Established by the Portuguese in 1618 CE as a quadrangular fort, it was later expanded and remodelled as a five-sided fort by the Dutch, who captured it in 1658. Prior to the conflict, Jaffna Fort was one of the largest and best preserved colonial forts in Asia (Nelson 1984). Despite detailed knowledge of its later history, little is known of its early sequences below the colonial period structures on the surface.

Archaeological investigations at Jaffna Fort in 2017 and 2018, in collaboration with the University of Jaffna and the Central Cultural Fund (Government of Sri Lanka), have utilised Ground Penetrating Radar Survey, excavation and UAV survey to map the Fort’s surviving architecture and identify potential traces subsurface heritage across the site. In addition, we trailed the application of post-disaster archaeological recording methodologies on the ruins of the fort’s early eighteenth century Kruys Kerk. Successfully transposing methods of approaching post-disaster heritage co-developed in the Kathmandu Valley in response to the 2015 Gorkha Earthquake, the surviving floor surfaces and foundations of the Kruys Kerk have now been exposed, and recyclable materials not available anymore, such as coral and seventeenth century Dutch brick have been recovered. The investigations at Jaffna Fort have also identified earlier elements of the Portuguese Fort, located below the open parade ground of the Dutch Fort, as well as artefactual sequences that push Jaffna Fort’s habitation back to the mid-first millennium BC, prior to colonial contact.

Assessments have now been undertaken outside Jaffna Fort, with Ground Penetrating Radar survey piloted in open spaces within Jaffna town, in order to identify subsurface heritage at risk from accelerated development. Furthermore, sites located throughout the Jaffna Peninsula are also being evaluated and the fort on the island of Delft has been investigated through GPR and auger core survey, which has identified subsurface heritage around this increasingly visited monument, which requires protection in advance of infrastructure development.

Whilst developing Archaeological Risk maps for these sites, the team are also investigating visitor behaviour, to see what sites tourists visit, and what sites could be further promoted, as well as identifying local handicrafts that could be marketed to aid local economies. The project is also developing signboards, leaflets and exhibitions to provide increasing tourist numbers with up-to-date and accessible information on our recent research findings. 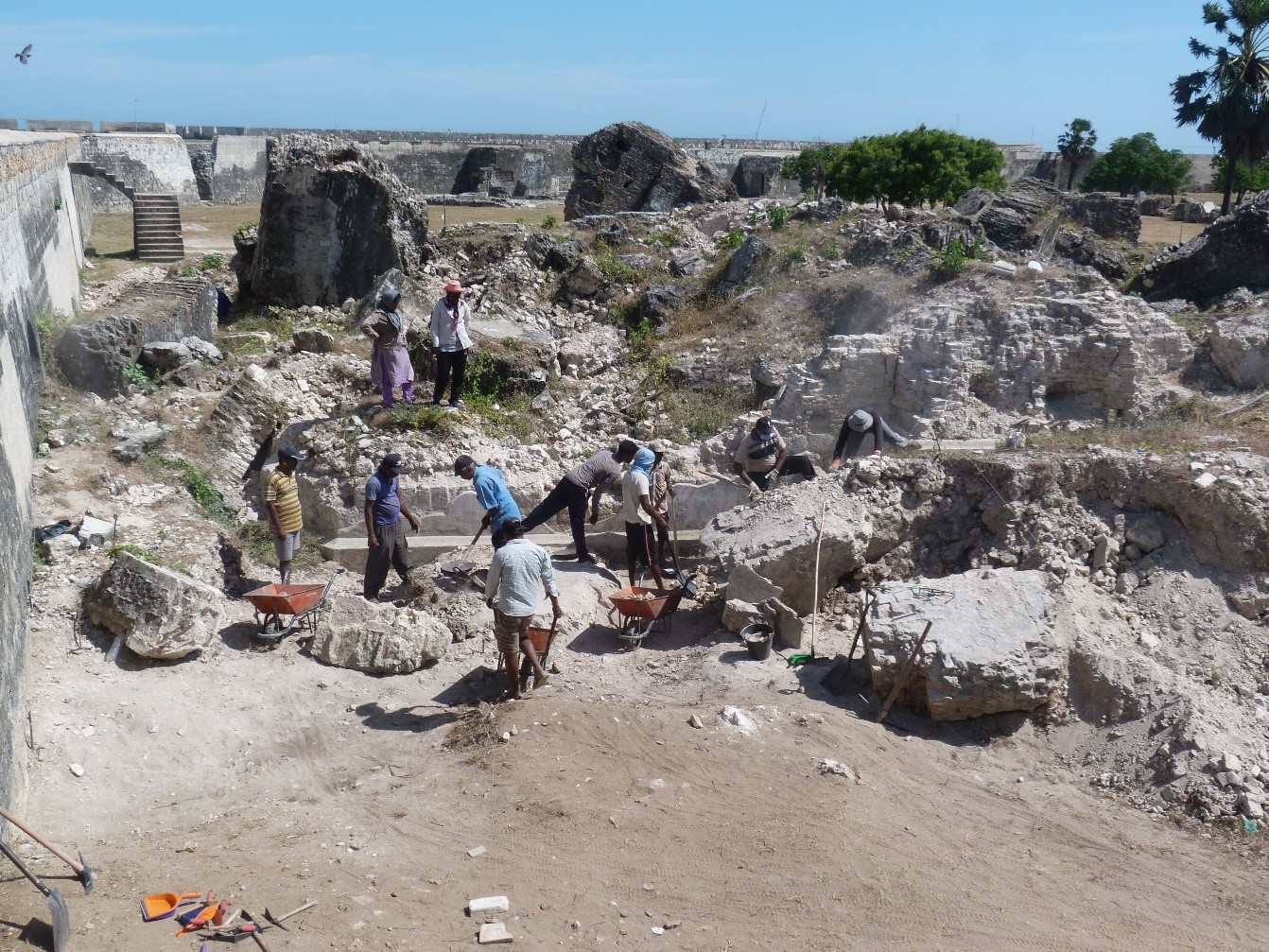 Image: Clearing away the rubble and debris from the destroyed Kruys Kurk in Jaffna