The Day Durham University Made and Claimed the News 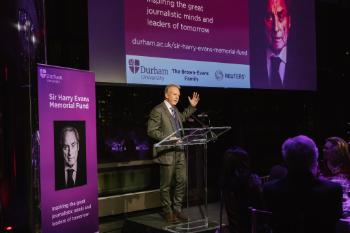 I have almost always been proud to be an alumnus of Durham University.

Even when I’ve been niggled by something I’ve read or heard and thought ‘What?! For goodness sake, just sort it out Durham!’, underneath the noise I have always bled palatinate. But sometimes, and increasingly so in recent years, Durham gets it SO right and on such a scale that – as alumni and supporters – we have to call this out and celebrate.

The best example of this ‘getting it right’ habit I hope our University will retain was last month in New York where I sat in a room vibrating with the energy of some of the most senior business, literary, and media figures in the world, watching renowned journalist and editor Tina Brown and eminent historian Professor Sir Simon Schama mark the launch of the Sir Harry Evans Memorial Fund.

When Evans died, I remember seeing the many stories and tributes in his name….and I had sort of known he was a fellow Castleman, known he had been this big investigative journo and editor, and had some sense of his impact for good in the world. When I was asked as Chair of the Durham Inspired Campaign to be involved in the development of an initiative in his honour, I soon realised I was unforgivably uneducated about the impact of this fellow graduate. If you want a quick Evans 101, I suggest you watch the video on the University’s website just to get a sense of the enormity of his impact. From uncovering failed diagnoses of cervical cancer, risking jail to expose the thalidomide scandal, to shattering nonsense lies of business and government: he was a singularly implacable figure when it came to hunting out the truth.

Inspired by what I had learned about Sir Harry, and having joined Andy Harston from the Development Office in the conversations with Thomson Reuters and Tina Brown about the prospective Fund, I prepared to be the fifth of five speakers at this NY event: Andy, Tina, Professor Schama, Galloni – as in Reuters global Editor-in-Chief, Alessandra Galloni, Senior – me. Can you think of a more daunting line up to come before you have to address a room?

This was an unashamed fundraising event – we’re getting better at those, too, I’m delighted to say – and I had decided that the earlier speakers had to establish the ‘why?’ and I was there as Campaign Chair to confirm the ‘how much?’ or the ‘power beg’ as it’s known in the ad business. So having watched the devastatingly emotional tribute from Tina to her husband, which left everyone appropriately wet-eyed and dazzled, and having watched Schama declare we are living in a ‘scoundrel age’ with a media simply failing the general public on a daily, my job was to land the ask.

Having scanned the singularly sensational guest list, I was buffeted at my table by fashion grandee Diane von Furstenberg – inventor of the wrap dress - the recent President of Time Warner, and David Thomson himself whose father, the late Baron Roy Thomson of Fleet Street, had launched a seemingly golden age of journalism in partnership with Sir Harry at the Sunday Times.

I was made palpatationally aware that presidential speechwriter Peggy Noonan, Carl Bernstein who broke Watergate, and former CBS, ABC, and 60 Minutes anchor Katie Couric – to name but a few – were a mere table away. I joked to the room that I had chosen to ignore, or forget, the guestlist before speaking and it was a terrifying honour to undertake this job on behalf of Durham; but I’m glad to say people responded and are continuing to respond generously.

A brief pause here: if you are considering journalism or broadcasting as a career, it’s probably fair to say Durham might not immediately spring to mind…true? Wrong! A simple google search will reveal that – Sir Harry aside –  Durham has produced some of the fiercest and most in-demand names in the wider business: George Alagiah, Jeremy Vine, Gabby Logan, Jon Ryley, Hunter Davies, Lorraine Heggessey… it goes on. And we have the UK’s ‘Best Student Newspaper’ in Palatinate, of which Harry himself was Editor – his and others’ formation here has put into the field so many committed to the unwavering exposition and elegant presentation of the truth. This is, again, a tradition and facility within Durham that we should note with greater emphasis – and this Fund will certainly help us to assert our bona fides in the genre.

So: almost a thousand years after my old college, Castle, was built; and over 50 years since Harry started his first Editorship at the Northern Echo; Durham University and Reuters have joined forces to create this initiative in his name which achieve two things:

24 hours before we tapped-the-glass for the first speaker at Lincoln Center – the CEO of which is a Collingwood guy, as it happens – the Evans initiative was being covered by media organisations all around the world, in celebration and wonder of what this new partnership and this programme will achieve. Fellow alumni will note that we were in the press for other things too, and in a way – as I said – as an almost always proud alumnus, I think opening the University up to scrutiny and account is without question a fair contribution in itself to the spirit of this new initiative.

In writing this piece today, I am profoundly proud of Durham University’s ambition to pursue this initiative and more initiatives which seek this intensity of scale, impact, and engagement. We are now putting the brand and the organisation where it truly belongs in the ever-competitive global gallery of Higher Education. Having met with the now in-harness Vice-Chancellor, Professor Karen O’Brien, I suspect research and education initiatives at this level of innovation and scale will become the expectation, not merely the aspiration.

If you are still reading this article it suggests you still care about Durham, in which case I ask you to lean in - in whatever way you can – to further to the Durham cause, be it this initiative or beyond. And to continue to engage with our University and our global alumni network as much and as often as you are able.

In a world of so few certainties, you can be absolutely certain that your support would make a disproportionately positive impact. Thank you in advance.