My book Electron Beam- Specimen Interactions and Simulation Methods in Microscopy was recently published by Wiley (April 2018). It explores the interactions between high energy electrons and the specimen in the context of the various simulation tools available to the microscopist, such as Monte Carlo, Multislice, Bloch wave, Electrodynamic methods etc. The book is available on Amazon and Wiley. Electron microscopy is used as the primary research tool to investigate a wide range of materials science problems, particularly in thin-film solar cell materials. There is also interest in modelling electron beam-specimen interactions as well as developing image and spectroscopic data analysis methods. Ongoing research projects are summarised below. 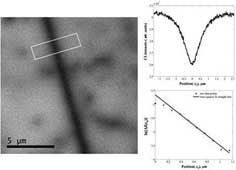 (i) Electrical activity of grain boundaries

Thin-film semiconductor solar cells contain a high density of grain boundaries that have an important effect on the overall device efficiency. The electrical activity of a grain boundary can be broadly described by two parameters, viz. the recombination velocity and barrier height which affects minority and majority carrier flow respectively. We have developed a novel cathodoluminescence method in the SEM for measuring the recombination velocity. The barrier height is measured from in-line holography experiments in the TEM, which together with structural and chemical information give a complete description of the grain boundary. These techniques are being applied to understand grain boundary passivation mechanisms in CdTe-based solar cells. 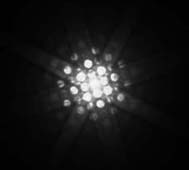 CZTS has recently emerged as a promising absorber layer material for thin-film solar cells due to the abundance and non-toxicity of its constituent elements. There are two crystal structures for CZTS, kesterite and stannite, although the difference in ordering energy is less than 3 meV/atom. Hence, depending on the processing conditions, CZTS is expected to be ‘partially ordered’ which introduces energy levels within the band gap, thereby affecting optical absorption properties. Convergent beam electron diffraction is used to explore the point group symmetry due to local ordering from nanometre sized volumes. This is complemented by scanning TEM (STEM) based techniques, such as HAADF pseudo-chemical contrast imaging and direct chemical analysis using EELS. 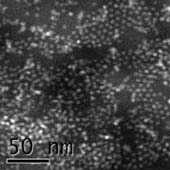 Hybrid solar cells contain inorganic nanomaterials (nanoparticles, nanorods) in a host polymer matrix. They are attractive solar cell materials due to low cost and ability to deposit the material over large areas using single-step solution processing. Light is absorbed by the polymer to generate a tightly bound electron-hole pair, called an exciton. The device works by dissociating the exciton at the nanomaterial-polymer interface and collecting the resulting free carriers at the electrodes. The nanomaterial morphology plays an important role in exciton dissociation and carrier collection. Electron tomography with high angle annular dark field (HAADF) imaging is used to characterise the 3D nanomaterial distribution. The aim is to correlate device performance with structural information. 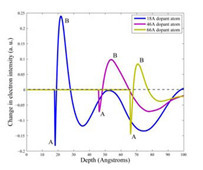 Dopant atoms are important in a number of technological applications, such as semiconductors and catalysts. Modern aberration-corrected electron microscopes are now ‘routinely’ capable of imaging individual dopant atoms. Quantifying these images, for example to determine the distribution of dopant atoms, is however challenging due to the dynamic interaction of the electron beam with the solid. The well-known Howie-Whelan equations describe electron scattering from slowly varying elastic strain fields, but are not applicable to dopant atoms where scattering is largely due to the change in chemistry. We have used quantum mechanical perturbation theory to analyse dopant atom scattering via Bloch waves. This has revealed unique scattering mechanisms for substitutional and interstitial dopant atoms for the first time. 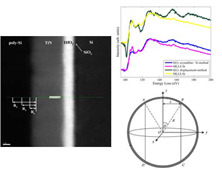 A frequent problem with chemical analysis in the TEM is that the sample may not be uniform within the analytical volume, no matter how small the electron beam diameter. This occurs with ‘rough’ interfaces that have projected width when tilted ‘end-on’ as well as core-shell nanoparticles. In such cases the measured signal contains a contribution from the phase of interest as well as the surrounding phase(s). We have developed a novel data analysis method for deconvolving the signal of interest from the raw data with no special requirements in data collection. The method is applicable to EDX and EELS data, the latter providing information on atomic bonding as well as chemical composition.