My research is focussed on glaciers and ranges from monitoring small mountain glaciers over the last few decades to large-scale reconstructions of ice sheets over tens of thousands of years. A common theme of much of my work is the use of remote sensing (e.g. satellite imagery), which allows repeat monitoring of changes in present-day glaciers and provides an efficient means to visualise and investigate the landforms left behind by former ice sheets during the last ice age.

Together with postgraduate students, postdoctoral researchers and collaborators from both the UK and abroad, recent research can be grouped under the following broad themes: 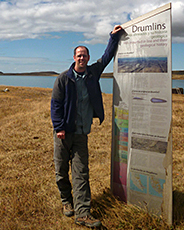 Measuring and monitoring the response of glaciers to recent climate change: this involves both satellite remote sensing and field-based studies to investigate how glaciers are responding to recent climate change and variability, with a particular focus on glaciated regions of Russia (e.g. the Caucasus, Russian High Arctic islands and Siberia), Norway, and major outlet glaciers in Greenland and East Antarctica.

Reconstructing former ice sheet and ice stream dynamics: this work uses satellite imagery to map glacial landforms left behind by former ice sheets in order to reconstruct their evolution and links to the ocean-climate system. Early work focussed on locating and reconstructing the behaviour of fast-flow features, known as ice streams, and this has since evolved into looking at their role in the deglaciation of former ice sheets. A key component of this work has been to assess how well numerical ice sheet models reproduce ice stream dynamics, which has implications for predicting and modelling future ice sheet behaviour. Whilst much of this work has been focussed on the North American (Laurentide) Ice Sheet, I’ve contributed to studies on all of the world’s major ice sheets.

Investigating the formation of subglacial bedforms: satellite imagery is an efficient technique to map a variety of glacial landforms created by glaciers and ice sheets. Recent work has contributed towards the collection of large datasets of landform characteristics and these have been used to formulate and test ideas about their formation (e.g. drumlins and mega-scale glacial lineations) and refine numerical models of ice flow over sediments. These datasets have also been used to help interpret recent geophysical evidence of subglacial bedforms beneath ice streams in Antarctica.

Glacial landforms and landscapes on Mars: imagery of Mars is now comparable (and, in places, much better) than that for the Earth’s surface. Based on Earth analogues, recent work has investigated the potential role of glaciers (and liquid water) in shaping Martian landscapes.