At temperatures about a millionth of a degree above absolute zero, matter enters a new regime where all its motions are fully quantum-mechanical. Such quantum matter can be controlled very precisely, and new states with novel properties emerge. Perhaps the best-known of these is a Bose-Einstein Condensate (BEC), in which the wavefunctions for all the particles are identical and in phase with one another.  A BEC has the same relationship to ordinary matter as a laser has to ordinary light. BECs formed from ultracold atoms have transformed the field of atomic and optical physics, and many new quantum properties of matter have been observed, such as quantum vortices and optical lattices, where atoms are held in a regular array by forces creates with laser beams.

There is now much excitement over the preparation and properties of ultracold molecules. Molecules have important properties that atoms lack: they can vibrate and rotate, and have a much richer pattern of electron and nuclear spins. They can also have large electric dipole moments: because of this, the interactions between molecules are anisotropic (angle-dependent) and much longer-range than the interactions between atoms. Quantum gases of ultracold polar molecules will have important new properties that cannot occur for atoms.

Ultracold polar molecules have now been produced experimentally: in 2008, a group at the University of Colorado associated pairs of potassium and rubidium atoms to form so-called Feshbach molecules, in very high vibrational states, by tuning a carefully controlled magnetic field across a Feshbach resonance. The resulting KRb molecules were then transferred to the ground state using coherent laser pulses. The era of ultracold molecules has arrived!

Our group works on the theory of cold and ultracold molecules. We work closely with many of the world-leading experimental groups, including those in Colorado, Innsbruck and Berlin.

Examples of our recent work include: 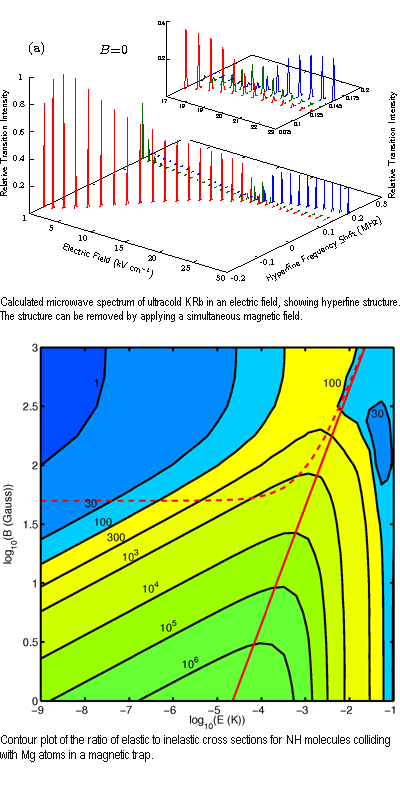 The field of ultracold molecules is very fast-moving. Five years ago, the production of quantum gases of polar molecules seemed a far-off dream. Now it is a reality. As new experiments and new systems are explored, new theoretical questions emerge all the time. Our theory group works closely with experimentalists to identify the most important questions, interpret the experiments, and propose new ones.