Karen’s research has a strong emphasis on using ‘wastes’ as resources. To date, much of her research has focussed on the passive treatment of contaminated waters and soils using clean ‘wastes’ which were previously destined for landfill. Karen has a track record of multi-disciplinary projects collaborating both with industry, regulatory authorities, policy-makers, science and social science departments.

In 2016, Prof Johnson gave oral evidence to the Government's Environmental Audit Committee's Inquiry into Soil Health. She stated that urban soils are currently unprotected and that engineers should lead the way in the sustainable management of urban soils since soils have an important role to play both in climate change adaptation and climate change mitigation http://www.parliamentlive.tv/Event/Index/f77d63b0-bc6e-425b-aa47-ba63be60be99 …pic.twitter.com/wNU6gaXp5Y 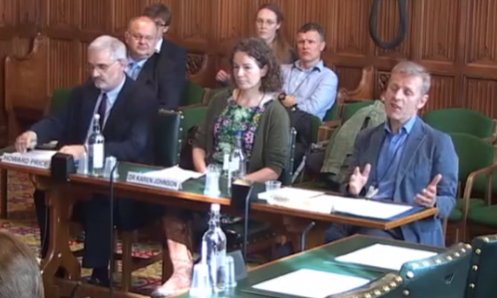 Her more recent work has focussed on breaking the link between land insecurity and poverty in Africa (Sudan, Zimbabwe, Ghana and South Africa)

As PI, she has held or is currently holding funding for a number of recent projects:

Industrial funding totaling, £112K, 2005-2011 (from BHP Billiton Ltd, Assmang Ltd and Scott Wilson Ltd to help support three EPSRC PhD students, two at Durham and one PhD at University of Stellenbosch in SA) to investigate the use of ‘wastes’ to treat contaminated land with Tony Hutchings (Head of Contaminated Land Team) from Forest Research (FR) as a co-supervisor;

Karen has developed fruitful collaborations with overseas academics (all Visiting Academics on current/past grants), for example in Zimbabwe - where she has established links with Professors Florence MtambaNgenwe and Paul Mapfumo at University of Zimbabwe, in South Africa with Dr Clarke at the University of Stellenbosch and in the US with Prof Tebo at Oregon University of Health and Science. She has also been a member of the EPSRC College from 2006.

Professor Johnson is also the Director of Research for her department and is keen to raise the profile of women in engineering (https://www.youtube.com/watch?v=1Q40dD0pzUk)