Nayanika joined Durham University in 2011 as a Reader in Socio-Cultural Anthropology and became a Professor in 2018. Before that she was in the Sociology department in Lancaster University prior to which she was a Post-Doctoral Fellow [Society for South Asian Studies, (British Academy)], in the Department of Anthropology, University of Sussex. She did her BA (Hons) in Presidency College, India; her MA in Jawaharlal Nehru University, New Delhi, India; and PhD in Social Anthropology from School of Oriental and African Studies - SOAS, University of London.

Other commitments and activities include: Aethiqah Abdul-Halim: The Veil in Indonesia (Co-supervised with Yulia Egarova) (funded by the Indonesian government). 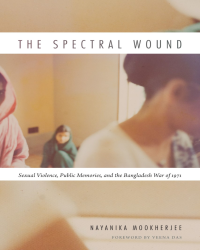 1. Public Memories of Gendered/Sexual Violence during wars/conflict situations As a Richard Carley Hunt Fellow awarded by the Wenner Gren Foundation for Anthropological Research (New York),my book emerging from an extensive fieldwork in Bangladesh is: The Spectral Wound: Sexual Violence and Public Memories and the Bangladesh War of 1971) is published in 2015 with Duke University Press (Foreword by Prof. Veena Das). See The Spectral Wound for further information about the book and the Somatosphere Book Forum: http://somatosphere.net/2017/02/book-forum-nayanika-mookherjee-the-spectral-wound.html Here are a few chosen reviews of the book:

2. Aesthetics, Affect and the Bangladesh War Crimes Tribunal
As part of a Leverhulme Research Fellowship (2009-2011) this project seeks to explore the configuration of the nation-state and the relation between art and politics through the evocation of senses by various affective apparatus (like museums, memorials etc.) in the context of the setting up of the Bangladesh war crimes tribunal. I was also invited for a one month scholarly residency in the Rockefeller Foundation in Bellagio as part of this project. Linked to this I co-organised an International Inter-disciplinary Conference 'Melancholic States', 27-29 September 2007. The manuscript under preparation from this project (Arts of Reconciliation and the Bangladesh War of 1971) is contracted with the Cultural Memory in the Present Series, Stanford University Press.

3.'War-Babies', Genetic Citizenship and Transnational Adoption
As a British Academy Mid Career Fellow I undertook this project to examine the contested relationship between genetics, and the nation-state through the prism of 'war babies' (children born as a result of sexual violence during wars) in Western Europe and North America. Through this, ideas of belonging and citizenship are theorised in the context of Transnational Adoption.