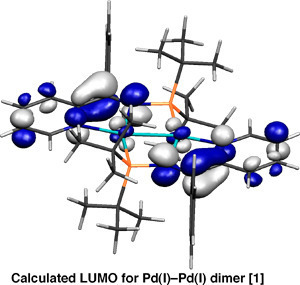 The group's research broadly spans the areas of synthetic inorganic chemistry, organometallic, organophosphorus and co-ordination chemistry with much of their work focusing on the preparation and characterisation of molecular transition metal complexes and functionalised organic and heteroatom-containing ligands.  These interests are driven by the potential application of these species in industrially-relevant small molecule catalysis.  On-going targets include the development of new initiator systems for olefin oligomerisation, co-oligomerisation, and polymerisation; gas-to-liquids technology (GTL); carbonylation; CO2 activation; and hydroformylation.  In parallel, the group are exploiting the unusual steric and electronic demands of main group fragments (especially those containing phosphorus) for the stabilisation of a range of unusual, often highly reactive molecular species, which they are starting to use as building blocks for the preparation of tuneable, extended pi-conjugated systems and as "responsive ligands".  The group is a part of the Department's Centre for Sustainable Process Chemistry (CSCP).

Further information and research details may be found on the group's web pages. 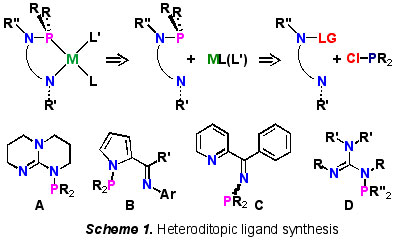 The concept of "non-innocent ligands" (NILs) is well-established in transition metal coordination chemistry and describes metal scaffolds that are subject to redox changes at a site remote from the metal.  In contrast, there has been little study of redox active motifs at the periphery of main group elements.  We have shown that, depending on the nature of the substituents at the phosphorus centre of the N-phosphino-pyridyl imines C, it is possible to exploit the redox behaviour of the pyridyl imine moiety to set up an equilibrium between the 'open' C-o and 'closed' C-c tautomers (Scheme 2) [6].  This equilibrium mixture exhibits a diverse array of chemistry, which can be further 'tuned' by varying the electrophilicity of the phosphorus substituents (R = amido, alkoxy, etc.).

This chemistry opens up an unusual Scholl-type aryl coupling methodology for heterocycles C-c, which may be used to prepare air- and water-stable diphosphonium salts E (Fig. 1).  These compounds are analogues of widely studied, electroactive, doubly-reduced viologens, but with a significantly extended pi-conjugated framework, exhibiting interesting photophysical behaviour [7].

We have started to exploit geometric constraints imposed by organic ligand scaffolds to provide a "flexible" on/off ligand 'arm' binding in conjunction with an asymmetric coordination environment, something of relevance in balancing the steric and electronic demands of many metal-based catalytic cycles (Scheme 3) [8].

Building on the intriguing and versatile chemistry surrounding pyridyl phosphino imines C, we have begun to explore their use as ligands.  Compound C behaves as an unusual multidentate ligand in the coordination sphere of palladium.  The neutral form of C coordinates as a kappa-2-P,N-pyridyl ligand [4], while in its mono-reduced form it behaves as anionic kappa-3-P,N,N scaffold bearing a localised radical, e.g. F.  Notably, the Pd(I)-Pd(I) dimer F behaves as a 'masked' form of Pd(0) in its reactions (Scheme 5) [1].

Selective alkene dimerisation is an important industrial process used in the manufacture of plastics, fuels, and commodity chemicals.  There are a variety of metal initiators known, with one of the most attractive being that derived from reaction of WCl6 with an aryl amine and an alkyl aluminium halide.  In collaboration with Sasol Technology UK we are probing the underpinning chemistry surrounding these types of tungsten system, which are believed to involve high oxidation state imido derivatives [9], and developing initiators with enhanced performance (Scheme 5). 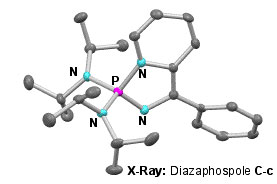 Many of the synthetic procedures used by the group involve working with air- and moisture-sensitive materials that are handled using inert atmosphere glove-box and Schlenk line techniques.  Routine use is made of many spectroscopic and analytical techniques including UV-vis, IR, and multinuclear NMR spectroscopies; mass spectrometry; gas chromatography; and X-ray crystallography (undertaken in collaboration with the group of Prof. Judith Howard).  Throughout their work the group makes extensive use of 31P NMR spectroscopy, which lends itself very effectively to the in situ monitoring of reactions and makes a powerful diagnostic probe for compound identification and characterisation.  Additionally, solid-state NMR is often used to provide further compositional and structural information (collaboration with Dr David Apperley and Fraser Markwell).  To further support the group's synthetic chemistry theoretical/computational techniques are applied to determine and rationalize the structure, reactivity, and properties of the compounds prepared.  In this area the group collaborate closely with Dr Mark Fox (Durham); Drs Jean-François Halet and Karine Costuas (Université de Rennes 1, France); and Drs Karinne Miqueu and Jean-Marc Sotiropoulos (Université de Pau et des Pays de l'Adour, France).

Catalyst testing often involves the manipulation of gases under pressure for which the group use dedicated autoclave systems and benefit from access to the Chemistry Department's unique high pressure chemistry facility.  Recently, the group have designed and built a high-pressure loop-flow reactor for performing gas/liquid reactions at elevated pressures and, in particular, those involving homogeneous catalysts.  The reactor can be used in one of two ways: for rapid/efficient catalyst screening (closed loop) or for undertaking preparative-scale reactions involving gaseous substrates (open loop).  The system's small volume brings significant advantages in terms of safety and reactant/solvent economy.  In collaboration with Cambridge Reactor Design (www.cambridgereactordesign.com) and the group of Prof. Graham Sandford (Durham), the group have started to explore pressurised gas/liquid reactions in flow regimes.