Lysis of membrane lipids promoted by small organic molecules: Reactivity depends on structure but not lipophilicity 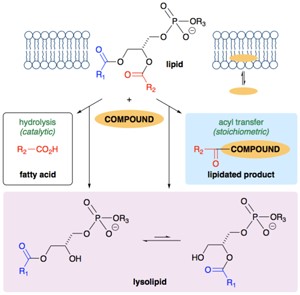 This work, led by John Sanderson, examines the potential for small organic molecules to influence the stability of membrane lipids. Several aromatic compounds were tested for their ability to either promote lipid hydrolysis in liposomes, or partake in acyl transfer from lipids to form lipidated compounds. High reactivity was found for some heterocycles, such as amino-substituted benzimidazoles and indazoles. Reactivity did not correlate with the predicted lipophilicities of the molecules. Overall the results demonstrate the potential to predict or "design-in" lytic activity once the rules that govern reactivity are better understood. The nature of this chemical instability has significant ramifications for the use or presence of lipids in diverse fields such as materials chemistry, food chemistry, and cell physiology. 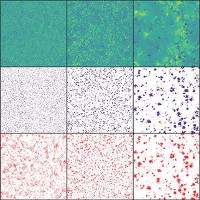 Amorphous yield stress materials include thermal systems, whose constituents jiggle under Brownian motion, and athermal systems, whose constituents lie still unless externally perturbed. Nonetheless, both types of system may exhibit "glassy" behaviour in response to external forcing, with structural relaxation occurring through local plastic particle rearrangements. The dynamics of athermal systems following a perturbation from mechanical equilibrium, however, has been previously assumed trivial. This paper by Rahul Chacko, Peter Sollich and Suzanne Fielding demonstrates that this is not the case for a simulated system of harmonically-interacting soft spheres relaxing under gradient descent from infinite temperature. They instead find a slow power law decay of the root mean squared particle velocity, with relaxation concentrated in ``hot spots'' of fast-moving, plastically-rearranging particles. The size of these hot spots grows as a power law with time. 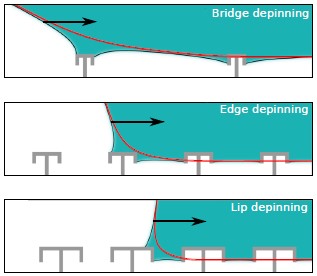 Superomniphobic micro- or nano- surface structures are remarkable in that they enable all liquids, even when highly-pressurised or of low surface tension, to be efficiently shed from a surface. These structures have significant potential to be transformative across a broad array of applications, from sustainable technologies for water purification, to anti-fingerprint coatings. Here, Jack Panter, Yonas Gizaw, and Halim Kusumaatmaja tackle the many hurdles to designing such ideal surface textures. To begin with, they develop a suite of efficient computational techniques to survey the effects of the design parameters on the three key wetting properties of the system: the contact angle hysteresis, critical pressure, and minimum energy wetting barrier. Recognising that these properties are coupled antagonistically, they then perform a simultaneous optimisation to generate ideal structures for membrane distillation and digital microfluidics applications. These methods are highly general, and are anticipated to direct future design in surfaces of special wettability.

Braiding, branching and chiral amplification of nanofibres in supramolecular gels

Mouldable like solids, but liquid-like in their ability to act as electrolytes and reaction media: were it not for their familiarity, gels might seem like wonder materials! Gels are, of course, indispensable as ingredients in foods and cosmetics, and even as vital components of biological tissues. Increasingly, however, these seemingly everyday materials are gaining recognition at the forefront of scientific research. This paper by Jon Steed and his coworkers developed from a niggling conundrum: can gel fibres, like their constituent molecules, be made to link up in particular patterns? A general feature of these materials is the presence of helicity: twisted fibres tend to be uniformly thick to minimise strain, and lock together to form neat helical bundles (Fig. 1). SEM images showed a striking array of flat braided structures. The team were puzzled why the helices form only certain braids, out of the hundreds of patterns that should be possible. The study highlighted a number of rules governing the entanglement of helices, and showcased the utility of braid theory in understanding gel fibre networks. The results have been highlighted in Chemistry World.

Nucleation of quartz under ambient conditions

Quartz synthesis is usually a signature of high temperatures and pressures, where high growth rates inhibit the selective formation of nm-sized crystals. In this article Phil Buckley, Natasha Hargreaves and Sharon Cooper demonstrate how α-quartz nanocrystals can be selectively nucleated under ambient conditions for the first time. Previous work by the Cooper group shows how thermodynamic control of crystallisation in organic systems can be achieved by using the 3D nanoconfinement of droplet microemulsions. Amorphous silica can be easily synthesised by acidifying sodium silica precursors, so we hoped that confining aqueous sodium metasilicate to microemulsion droplets would produce quartz nanocrystals if thermodynamic control could indeed be achieved. However, thermodynamic control requires the reversibility of creating and breaking intermolecular bonds; under ambient conditions this may not seem feasible for a giant covalent structure such as quartz. After 2 days in the microemulsions, 2.0 ± 0.7 nm sized quartz was readily identifiable from TEM micrographs. We speculate that it is the diversity of alkalinity within the microemulsion droplets that facilitates the reversible Si-O bond breakage and formation required. Our nanoquartz contained surface defects due to their small size. Mild hydrothermal experiments were therefore performed to anneal out these defects, presenting us with an opportunity to study the growth and annealing process of nanoquartz by XRD and solid state NMR. Accordingly, we were able to selectively synthesise 2-5 nm nanoquartz whilst controlling the surface structure, producing nanocrystals ideal for studies aimed at lung diseases such as silicosis. Moreover, our microemulsion-hydrothermal methodology, which allows control and selectivity over the size and surface structure of nanocrystals, may be beneficial in the optimisation of heterogeneous nanocrystal catalysis. 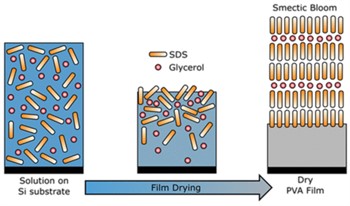