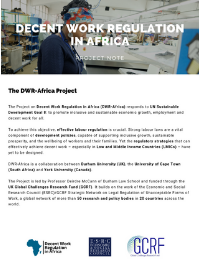 In 2018, the DWR Project launched Decent Work Regulation in Africa (DWR-Africa). The Project was centred on effective regulatory strategies for decent work in the in southern Africa, with a particular focus on the garment sector.

DWR-Africa established a regional network of researchers and stakeholders in southern Africa, conducted research on challenges to labour law enforcement in the region, and generated recommendations for research and regulatory policy. The project also produced Rethabile’s Story, a short film on life in the Lesotho garment factories.

A Regional Meeting was held at the University of Cape Town on 18 June 2018. The event brought together participants from the region and international partners. It provided the opportunity for a regional dialogue on regulatory strategies that can achieve decent work in the African context, with a focus on enforcement of labour laws in the garment sector.

The DWR-Africa Project produced a document which outlines the Meeting’s findings and recommendations: Regional Meeting on Decent Work Regulation in Africa. The publication provides a contribution to the lively debates on effective labour standards, and on decent work in the garment sector, both in Africa and across the world. 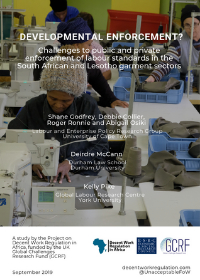 on the Findings and Recommendations of the Regional Meeting and subsequent fieldwork, the DWR-Africa project produced the report on Developmental Enforcement (2019).The report focuses on the most urgent challenges to public and private enforcement of labour standards in the South African and Lesotho garment sectors. 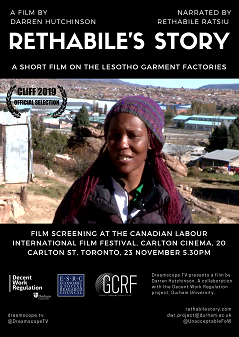 DWR-Africa had a particular focus on Lesotho, were it investigated work-life and gender dynamics and how these relate to informality in – or are associated with – the garment sector.

Some of the research findings are reflected in our documentary on the garment sector in Lesotho and South Africa. The film – Rethabile’s Story – was launched at the UN in Geneva (July 2019) and has since been shown to audiences around the world, including as an Official Selection of the Canadian Labour International Film Festival, with a cinema screening in Toronto in November 2019, and the Workers Unite Film Festival, with a screening in New York in September 2020.

The documentary is raising public awareness of conditions in the garment sector in Lesotho among audiences across the world.

The DWR network’s findings and recommendations have been used by the UN International Labour Organization to shape global policy on effective labour laws.

In Africa, the project fi 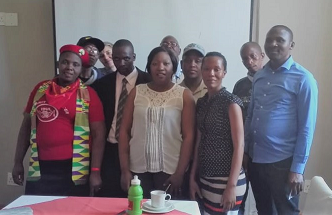 ndings have been drawn on by the Lesotho Labour Commissioner, the Apparel Manufacturers of South Africa, ILO Pretoria, and by trade unions across the region. The IndustriALL union, for example, has used our findings in capacity-building (Swaziland, Madagascar), collective bargaining (Uganda, Zimbabwe), and advocating for rights in Export Processing Zones (Ethiopia).

In Lesotho, the Project has contributed to Labour Code reform and generated a national-level Framework for a Decent Work Training Programme.