February 2015 - New law underpinned by the research of Professors McGlynn and Rackley, gets Royal Assent

The Criminal Justice and Courts Act received Royal Assent on Thursday 12 February 2015. The Act contains amendments on the law of rape pornography and revenge pornography.

Clare McGlynn, along with Erika Rackley (University of Kent) campaigned to reform the law on extreme pornography. Their research formed the basis for the high-profile campaign led by Rape Crisis (South London) and the End Violence Against Women Coalition to close the rape pornography loophole.

“Rape pornography provides the cultural context in which sexual violence proliferates and is not taken seriously. The Government must now publicise the new law and work with the police and prosecutors to ensure its effective implementation.”

The Joint Committee on Human Rights has, in a recent report, welcomed the provision in the Criminal Courts and Justice Bill, extending the current offence of possession of extreme pornography to include possession of pornographic images depicting rape and other non-consensual sexual penetration. In their written submission to the committee, Clare McGlynn and Erika Rackley argued that the provision is “human rights enhancing” and that “rape pornography generates cultural harm and it is this cultural harm which justifies legislative action”.

The Committee agreed to conclude:

“We welcome, as a human rights enhancing measure, the provision in the Bill to extend the current offence of possession of extreme pornography to include possession of pornographic images depicting rape and other non-consensual sexual penetration. We consider that the cultural harm of extreme pornography, as set out in the evidence provided to us by the Government and others, provides a strong justification for legislative action, and for the proportionate restriction of individual rights to private life (Article 8 ECHR) and free to receive and impart information (Article 10 ECHR)” Joint Committee on Human Rights [1.50] 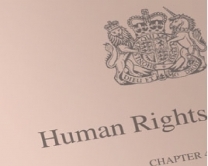 Clare McGlynn and Erika Rackley have written an opinion piece for the New Statesman on the Government’s plan to extend the current extreme pornography law to include pornographic images of rape. Welcoming the changes, they argue that such images glorify and eroticise sexual violence and contribute to the creation and perpetuation of a cultural climate in which sexual violence is condoned. Their response was also covered regionally including The Northern Echo and Sunderland Echo. 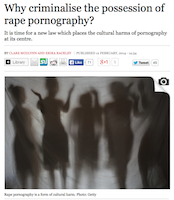