The Square Kilometre Array: Probing the Universe from the Dawn of Time to the Origins of Life By Professor Philip Diamond (SKA Director-General)

The Square Kilometre Array: Probing the Universe from the Dawn of Time to the Origins of Life
By Professor Philip Diamond (SKA Director-General)

The Square Kilometre Array will be the world’s largest and most sensitive radio telescope. The total collecting area will be approximately one square kilometre giving 50 times the sensitivity, and 10,000 times the survey speed, of the best current-day telescopes. The SKA will be built in Southern Africa and in Australia. Thousands of receptors will extend to distances of up to 3 000 km from the central regions.

The SKA will address fundamental unanswered questions about our Universe including how the first stars and galaxies formed after the big bang, how dark energy is accelerating the expansion of the Universe, the role of magnetism in the cosmos, the nature of gravity, and the search for life beyond Earth. The target construction cost is €1,500 million and construction of Phase one of the SKA is scheduled to start in 2016. The SKA Organisation, with its headquarters in Manchester UK, was established in December 2011 as a not-for-profit company in order to formalise relationships between the international partners and centralise the leadership of the project. 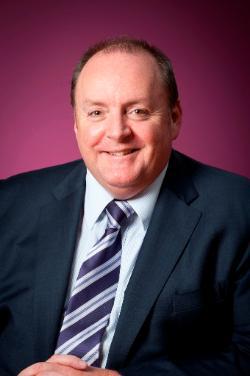 Professor Diamond has 30 years’ experience in the field of radio astronomy and a long standing involvement in the Square Kilometre Array radio telescope project. Previously he served as Chief of CSIRO Astronomy and Space Science (CASS) organisation in Australia. He has worked as a professional astronomer in five countries (UK, Sweden, Germany, USA and Australia) and has also served as Director of the Jodrell Bank Centre for Astrophysics. During his time in Australia, Prof. Diamond directed the operation of two major facilities: the Australia Telescope National Facility (ATNF: comprising Parkes Observatory, the Australia Telescope Compact Array and the Mopra telescope) and the Canberra Deep Space Communications Complex (CDSCC) at Tidbinbilla, part of NASA’s Deep Space Network. In addition, he was responsible for the team designing and constructing ASKAP, the Australian SKA Pathfinder, currently being built in Western Australia.

He first became involved in the SKA in 2000, shortly after his return to the UK from 12 years at the NRAO in the USA, when he organised one of the early meetings of the International SKA Steering Committee (ISSC). Since that time, he has been heavily involved in various SKA activities. He was one of the longest-serving members of the ISSC, which later became the SSEC, and chaired the committee in 2005/6.