The Nobel Prize in Physics 2022 was awarded to Alain Aspect, John F. Clauser and Anton Zeilinger "for experiments with entangled photons, establishing the violation of Bell inequalities and pioneering quantum information science".

Entanglement is the most mysterious feature of quantum mechanics – the property that the quantum states of two things which once interacted cannot be treated individually, rather the system must be considered as one entity, even if the object are spatially separated by bast distances.  Einstein referred to this phenomenon as “spooky action at a distance”.

Following ground-breaking experiments last century to investigate quantum correlation, during this century it has been realised that entanglement is the key resource in the burgeoning fields of quantum science and quantum technology.

Professor I G Hughes, Head of the QLM research group, commented: “It is fabulous to see the pioneers of this field being recognised for their key work, especially as the we are trying to learn how to harness and exploit the weirdness of quantum mechanics.”

In 2012 Professor Aspect visited the Physics Department at Durham to officially open the refurbished teaching laboratories, and to deliver the Rochester Lecture [watch video].

Above: Alain Aspect admires the mural outside the refurbished laboratories, alongside academics from the department and the then Vice-Chancellor Chris Higgins. Below: Alain unveils the plaque. 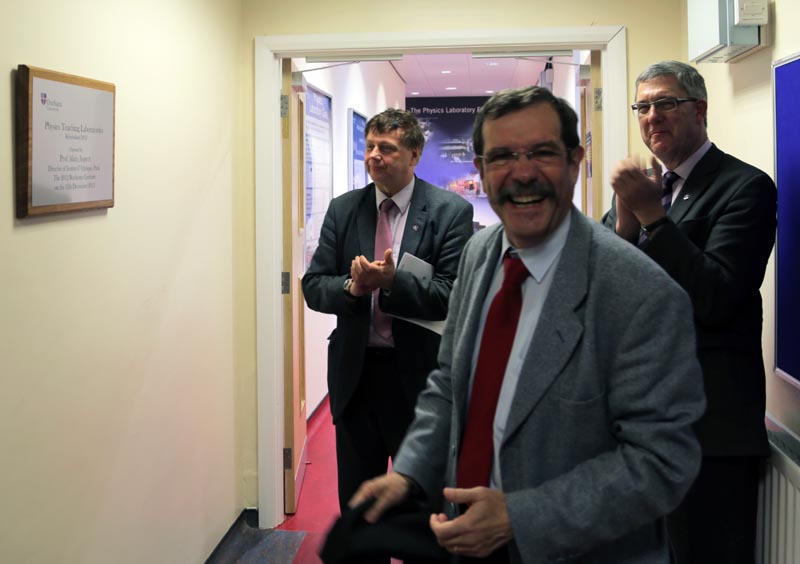 Head of Department, professor Paula Chadwick added “Many congratulations to Professor Aspect – we fondly remember his visit in 2012, especially his well-received lecture that was pitched at an ideal level for our undergraduate students. ”