As a demonstration of single atom trapping, researchers in the Quantum Light and Matter research section have created and imaged festive arrangements of individual laser-cooled caesium atoms. Each bright pixel in their images corresponds to light captured from a single caesium atom cooled to a temperature a million times colder than room temperature and trapped in a tightly focussed laser beam called an optical tweezer.

The team, led by Prof. Simon Cornish, uses optical tweezers to trap single atoms. Optical tweezers are intense beams of light focused to a spot approximately a millionth of a metre in diameter. When this focus is overlapped with a laser-cooled cloud of ultracold caesium atoms, a single atom can become trapped by the light. 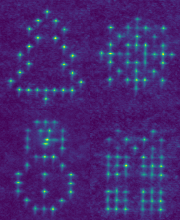 By carefully modifying the phase profile of the light using a spatial light modulator prior to the focussing lens, multiple optical tweezers can be created. This allows multiple atoms to be individually trapped in arbitrary patterns.

The atoms can then be imaged by using the same focussing lens to collect light scattered during the laser cooling process. This scattered light is detected by a sensitive camera using an optical system which has a resolution of half a millionth of a metre.

As a demonstration of the ability to make a wide range of desired shapes, the team have created some festive arrays of atoms: a Christmas tree, a snowflake, a snowman, a present, as well as a picture of the Angel of the North. These arrays are very small; the atoms in the images are typically a few millionths of a metre apart and the Angel of the North is only 0.05mm tall (1/400,000th the size of Antony Gormley's sculpture!).