The Physics Department Development Talent scheme promotes, enhances and encourages the possibility of early career researchers developing their research careers within the Department by providing support in the form of up to £10 000 in flexible funding.

We are pleased to announce that the four successful applicants in the 2021 inaugural round of this scheme are Dr Phil Gregory, Dr Miro Cafolla, Dr Sarah Bromley and Dr Will Trewby. Please join us in offering them our congratulations and best wishes for success in their research endeavours. 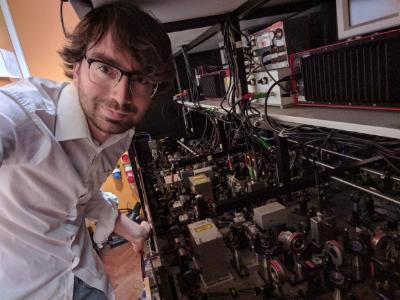 Synthetic dimensions are a new and exciting concept with applications in quantum simulation. The approach is to treat the internal states of an atom or molecule as effective sites along a synthetic lattice dimension, with coherent couplings between the sites interpreted as an effective tunnelling. The introduction of synthetic dimensions can be used to bypass physical limitations of real systems, by offering a way of increasing the dimensionality of a system. They can also be used to study systems with unusual geometries, which may be hard to engineer in real systems. With this award, I will use the rotational and hyperfine states of ultracold RbCs molecules as a synthetic dimension to study novel 1D topological systems. The primary focus will be to develop the tools and techniques necessary to realise the 1-dimensional Su-Schrieffer-Heeger (SSH) model, one of the simplest models known to exhibit topological invariants and edge states. 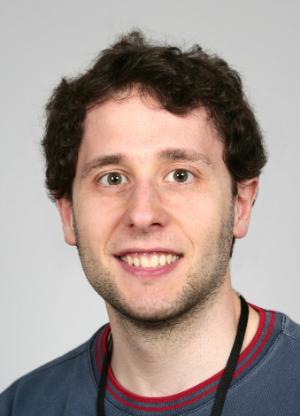 Friction has a crucial role in almost any technological applications accounting for more than 25% of the world energy consumption. Ionic liquids (ILs) have been suggested as the next generation of green lubricants. Applications of ILs in real-life scenarios rely on a full control of their properties in often inaccessible nanogaps. Externally applied electric fields have emerged as a strong candidate to change surface polarisation of sliding solids and manipulate ILs lubricating properties in such tight gaps. However, an exhaustive picture of the molecular processes behind electric control of friction in systems lubricated by ILs is still lacking. The project aims at investigating the influence of nanoscale electric fields on the organization and shear response of model IL lubricants relevant for any mechanical systems. The project will use atomic force microscopy to image, with sub-nanometric resolution, structural organization of ILs molecules as a function of surface electric polarization; and at the same time studying their dynamic behaviour, in terms of lubricated friction force. The project will support rational design of new and improved ILs that can reduce energy consumption in advanced tribological applications. 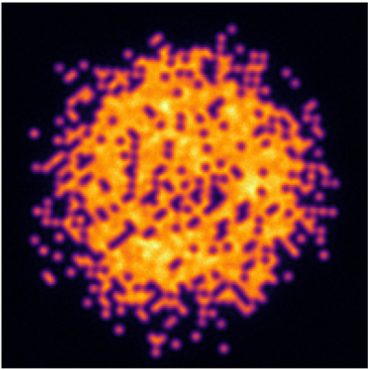 Ultracold molecules hold enormous promise for a range of applications in quantum science and technology.  However, to realise the benefits of the ultracold regime it is necessary to spatially trap the molecules to stop them falling due to gravity.  In general, the trapping potential will be dependent on the specific internal state of the molecules.  This means that trap inhomogeneities lead to different molecules of the same species having different transition frequencies which leads to reduced coherence times.  In optical traps, different trap intensities can lead to such inhomogeneities.  To overcome this, specific wavelengths of light can be used where the polarizability of the different internal states is the same.  These so called “magic-wavelength” traps [1] are widely used in atomic clock experiments and have recently been implemented in molecule experiments [2, 3].  I plan to investigate magic trapping of 87Rb 133Cs molecules in different rotational states [4].  By performing spectroscopy measurements on ground state 87Rb 133Cs molecules in the presence of laser light around 1146 nm this magic wavelength can be measured precisely for the first time. 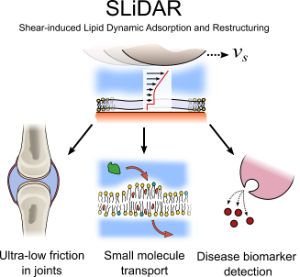 Lipids, as well as forming the backbone of cell membranes, drive a staggering array of functions including energy transduction, intracellular transport and signalling. Their fluidity and interfacial behaviour contribute towards the ultra-low friction regimes in biological systems, which are “green”, self-healing and easily outperform artificial lubricants. Lipid bilayer restructuring also plays a key role in transmembrane molecular transport and signalling of disease through exosome formation.

The key to lipids’ versatility in vivo is their dynamic behaviour. This operates across orders of magnitude in time and includes rapid headgroup motion, self-diffusion within the membrane and slower, structural changes. To date, most experiments have been restricted to a narrow range of velocities that do not present a complete picture of membrane dynamics.
Our proposed SLiDAR device combines high frequency shearing actuators with Ångström-resolution force microscopy to allow the probing of lipid bilayers at velocities from hundreds of nm/s to mm/s. This will uniquely allow us to investigate frictional behaviour, dynamic absorption of molecules and membrane rearrangement, over quasistatic, “glassy” and potentially non-linear regimes, all in a label-free manner. The device will pave the way to novel lab-on-chip diagnostics and a more complete understanding of biolubrication.