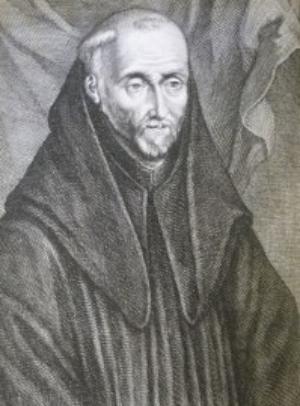 David Baker was born in 1575 to Protestant parents in Monmouthshire, Wales. Having studied at Oxford, he converted to Catholicism while working at London’s Inns of Court. He travelled abroad with English monks belonging to the Cassinese congregation and took the Benedictine habit and the name of Augustine at St Justina’s monastery in Padua, Italy, in 1605. He was later aggregated to the community of St Laurence’s, Dieulouard.

Baker was a pivotal figure at the then newly formed Benedictine convent at Cambrai, where he acted as chaplain from 1624 to 1633. He lived at St Gregory’s, Douai from 1633 to 1638 before joining the English Mission and dying in London in 1641. He left behind an impressive body of work, which has established him as a hugely influential mystical writer, adapting pre-Reformation English spiritual writing for use after the Council of Trent.

Image from the frontispiece of Serenus Cressy’s Sancta sophia (1657); the property of the Trustees of Ushaw College. 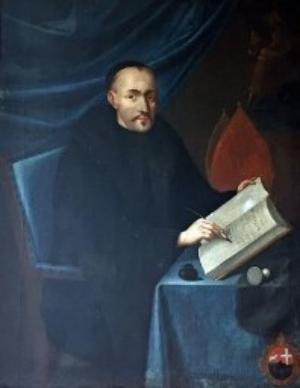 A native of Ripon in Yorkshire, Wilfrid Reyner was born in 1589 and subsequently attended the English College at Douai, where he was ordained as a secular priest in 1602.

After a period on the Mission, he was professed in 1613 for the Westminster aggregation at St Laurence’s, Dieulouard, taking the name Clement. Returning to England as a missioner monk, Reyner was imprisoned for a period in Yorkshire. Upon release he returned to the Continent and served as the president of the English Benedictine Congregation from 1635 to 1641.

He was subsequently pivotal in securing the defunct monastery at Lamspringe as a home for a new English Benedictine foundation, becoming its first abbot in 1643. A gifted scholar, Reyner received a Doctorate in Divinity from the University of Douai and his principal academic achievement was his Apostolatus Bendictinorum, published in 1626, which argued for the existence of the English Benedictine Congregation before the Reformation; he can be seen penning it in this portrait. Clement Reyner died in 1651. 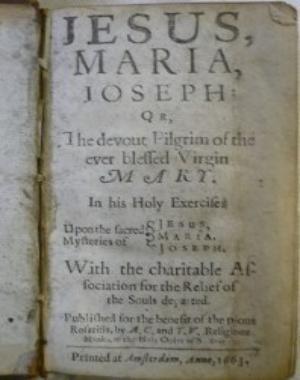 This is the work of the English Benedictine devotional writers, Alban Crowther and Thomas Sadler, alias Vincent. Shown here is the title page of the second edition, the first having been printed in 1657.

This particular copy belonged to Catherine of Braganza, wife of Charles II, and the edition included a dedication to her. The two monks were closely associated with the creation in the mid-1650s of the Confraternity of the Holy Rosary, which thrived in Restoration England until the Popish Plot.

The confraternity was established with the blessing of both the Pope and the General of the Dominican Order, underlining the monks’ role in bringing ideas from Catholic Europe to their officially Protestant homeland.

Image the property of the Trustees of Ushaw College. 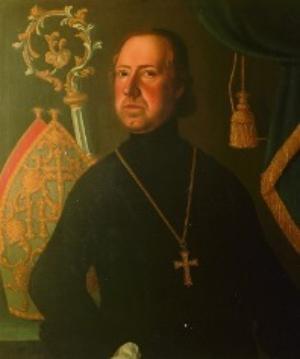 Born in Warwickshire, John Knightley arrived in Lamspringe as a schoolboy and continued through to his profession as a monk in May 1670, taking the name Maurus. He was sent on the Mission to London in 1685, where he served as a royal chaplain at the Court of St James.

At the outbreak of the Glorious Revolution and the collapse of James II’s reign, Knightley returned to his monastery. After a spell as prior at Lamspringe, a period of residence at St Gregory’s, Douai, and time in Rome as procurator of the English Benedictine Congregation, he became abbot of Lamspringe in 1697. Controversy and discontent within the community plagued his years in office, so much so that the president of the English Benedictine Congregation ordered a visitation of the abbey in 1707. Knightley died a few months later, in April 1708.

Image the property of Ampleforth Abbey. 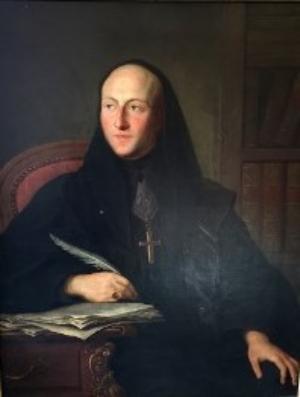 Charles Walmesley was born in 1722 in Standish, Lancashire, and subsequently received a Benedictine education at St Gregory’s, Douai and St Edmund’s, Paris. He was professed a monk of the latter in 1739. He served as prior of the community in Paris from 1749 to 1752 before going to Rome to as act as the English Benedictine Congregation’s procurator.

He succeeded to the office of Vicar Apostolic of the Western District in 1764, and remained in this office until his death in 1797. Walmesley was a gifted academic, receiving a doctorate from the Sorbonne and being made a Fellow of the Royal Society in London.

The database only includes those individuals who entered the Benedictine life (for however short a time) after Elizabeth I came to throne in England in 1558.

Enquiries about Monks in Motion should be sent via the email below.