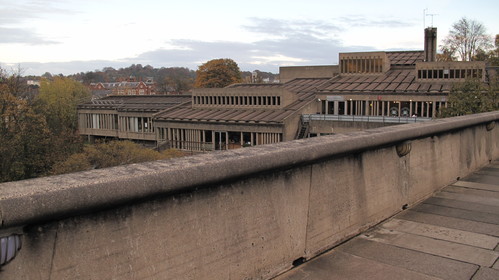 The Secretary of State for Digital, Culture, Media and Sport has granted Grade II listed status to Dunelm House. A press release by the C20 Society can be read here. The C20 Society have referenced the conference hosted by CVAC in the press release and the programme for the event held in 2017 is below:

Open to the public. Free to attend. This event is now closed.

This day conference will consider the current question of 20th Century concrete architecture and its conservation. Brutalism was an important aspect of post-WWII architecture, especially in the UK. As these buildings become historic, they face urgent questions of conservation, regeneration or demolition. Although never a popular style, many with a training in architecture regard Brutalist buildings as possessing unique aesthetic merit. Their beauty often relates to medieval architectural forms, drawing on the Gothic in ways comparable to Modernist architecture’s relationship to Classicism. Durham contains medieval architecture of world importance that is valued and protected accordingly. The fate of the most significant 20th Century building on the university estate, however, is uncertain, and the future of Dunelm House is currently part of the national conversation around questions of how and whether to care for concrete buildings. Regeneration is possible, as with The National Theatre in London or Apollo Pavilion, Peterlee. Alternatively, demolition may be justified, as with the “Get Carter” Car Park, Gateshead. This conference brings together leading experts on 20th Century concrete architecture in the UK, to explore issues of aesthetic appreciation, cultural value, and the criteria by which university, civic and national communities decide to conserve architecture.

The day will include a tour of Dunelm House.

Programme of the day

Establish clear parameters for discussion & questions to address: aim is to understand the historic context for Brutalism in Britain; to understand its aesthetic value, and why this is often contested; to explore conservation issues for concrete structures as they become heritage buildings. The aim of the day is an academic event that promotes informed discussion and understanding about a significant issue in contemporary and historic visual culture, not a polemic or a campaign. The conference is about Brutalism in general, and Dunelm House in particular.

Elaine Harwood ‘The Beginnings of Brutalism and Dunelm House’

Catherine Croft ‘Why Save 20th Century Buildings? With a Footnote on Successful Concrete Conservation’