ReferenceError: "department" is not defined.
Skip to main content
Register via Eventbrite

Everyone welcome to our C21 research seminar, where Professor Marjorie Perloff decodes the French spy series The Bureau.

The French five-season 50 episode spy series Le Bureau has won many international prizes for best TV series of the moment: its story of undercover agents for the DGSE (the French equivalent of M16 and CIA) has incredibly exciting plotting as well as remarkable documentary footage about the working of cyber-spy operations in Syria, Iran, Algeria, Russia, and so on. But it is more than slick TV narrative. Le Bureau is an existential drama about a world where the acquisition of information is all-consuming. Each agent has a legend—that is an invented name and narrative and must be true to that narrative while on a specific mission. The interaction between agents—all of them deceiving one another as a matter of course—and between agents and their office managers back in Paris who control their movements, makes for a fascinating examination of choice in what seems to be a hall of mirrors. At its center is the love story of Paul and Nadia. In this essay I want to show what makes this contemporary version of the Faust legend so compelling and provocative. I also argue that this relatively new genre —at once documentary and poetic—is very much of our time. 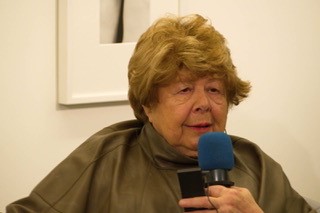 Marjorie Perloff was Sadie D. Patek Professor of Humanities Emerita at Stanford University until her retirement in 2002. She is also Florence Scott professor Emerita of English at the University of Southern California. She is a member of the American Academy of Arts & Sciences and the American Philosophical Society. Her most recent book, Infrathin: An Experiment in Micropoetics, has just been published by Chicago.