ReferenceError: "department" is not defined.
Skip to main content
Register

“savage warnings and notations”: The Women Charting New Sensory Terrains in the Wake of Intelligence Work

This lecture explores the extent to which creative work developed by a number of ex-intelligence operatives in the wake of war posited a total recalibration of sensation and the senses at midcentury.

The lecture will suggest that intelligence work, as well as the decades of discretion such work entailed, led to the estimation of a bewildering new sensory terrain. Was this a realm that could be, in the subversive potential of its sensory integration, uniquely inhabited by women artists and writers? How did they adapt to its new ‘savage warnings and notations’? The three voices central to this discussion, Elizabeth Bowen, Christine Brooke-Rose, and Prunella Clough, are rarely considered within the same critical space, and yet all three place sensory intelligibility at the centre of their aesthetic endeavours in the years immediately following their service. Is their work in the wake of war testament to an elusive new form of address or agency for women writers; a ‘wireless voice’ – as Brooke-Rose conceives of it – that is capable of setting revolutionary new terms of encounter and coherence? 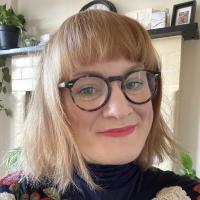 Dr Natalie Ferris's first monograph Abstraction in Post-War British Literature 1945-1980 will be published by OUP in early 2022. She has held research fellowships at a number of institutions, including the Henry Moore Institute, the Yale Center for British Art, the Getty Research Institute, and the Harry Ransom Center. She is contributing editor at ASAP/J, and the English Editor of SPACE.