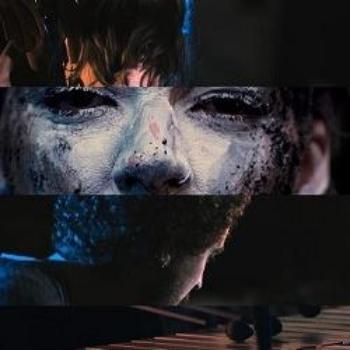 'The Occasion Collective' transformed Durham Castle with an immersive live sound performance of SLOW by Jamie Cook. Musician and sound artist Jamie Cook composed SLOW, inspired by minimalist pulse music, specifically Steve Reich’s Music for 18 Musicians. Complex, poly-rhythmic, surround-sound textures were channelled throughout the Castle alongside art installations that referenced the histories of the World Heritage Site. In the Great Hall a huge screen showed a film based on the Scottish Soldiers that were found in the World Heritage site. Low lighting helped to obscure the portraits on the walls and only the bust of Sappho was spotlit. One sculpture as well as 4 film works, each based on a female character from Durham Castle were shown on screens placed in the Black Stairs, Tunstall Gallery, Tunstall Chapel and Norman Chapel , creating a promenade experience for the audience.