Last month while working at my kitchen table (as I have done since starting at Durham as a new Assistant Professor in January), my husband Tim came in and asked if I could come to Iceland and help download seismic data about a new volcanic eruption.

As an observational seismologist I have a lot of seismic field work experience, having worked in Iceland during my PhD at Cambridge, trying to image the deep crustal and mantle structure that contributes to surface volcanism. Iceland fieldwork is also where I first met Tim - a volcano seismologist who studies the tiny earthquakes linked to the movement of magma within the crust.

Increased amounts of earthquakes have been observed on the Reykjanes peninsular in SW Iceland (close to the capital Reykjavik) since Nov 2019.  This activity is thought to reflect a new rifting episode accommodating the spreading of the North American and Eurasian tectonic plates which Iceland straddles. To monitor this activity, the research group that Tim works with in Cambridge deployed 12 seismometers around the area last summer. These remote instruments supplement the permanent live-streamed stations run by the Icelandic Meteorological office (who monitor earthquakes and volcanoes as well as weather). The earthquakes rumbled on throughout 2020 and into 2021, shaking the citizens of Reykjavik with several large magnitude (>Mw 5) events. There was evidence of several magma intrusions, based on seismicity patterns and surface deformation observed in satellite data.

Then on 19th March 2021 a small basaltic fissure eruption started in Fagradallsfjall valley, only 40km from Reykjavik, right in the middle of the Cambridge network. There was a sudden rush to know if the stations deployed last summer had captured the seismicity leading up to the eruption, and whether or not they were still working (following the harsh Icelandic winter), and continuing to capture seismicity associated with the new eruption. It was clear a field team needed to head out, download the data and make sure everything was working.

However, arranging short-notice international field work in the middle of a global pandemic is not easy. What followed was a mad rush of logistical arrangements, risk assessment forms and deciphering government policies across two countries. After a stressful few days with much support from new colleagues at Durham to help push through the paperwork as well as local support from collaborators in the University of Iceland, Tim and I both managed to secure permission to head out to Iceland.

5 days and 3 negative Covid tests later we headed out into the field in a University of Iceland 4 wheel-drive packed with equipment. The next week or so was filled with driving over bumpy lava flows and through thick mud, digging up buried instruments and pulling out flash-cards full of precious data. While this is always fun the weather was pretty cold, getting down to -5 degrees most days with snow and strong winds enough to freeze the fingers of anyone trying to fill in information on a seismic servicing sheet.

We also deployed 3 new seismic stations at sites carefully chosen to maximize data coverage around the eruption, while being a safe distance from predicted future lava coverage. This gave us several opportunities to hike up to nearby hills and peer into Fagradfjall valley to see the ongoing eruption from a safe distance.

Our penultimate evening was spent with the throngs of people driving from Reykjavik and hiking along the civil-defence approved paths to see the eruption at night. In the 2 weeks since we’d arrived the eruption had evolved from a single fissure into 4 separate eruption points, and the lava was now slowly filling two neighboring valleys. The morning after our visit the number of fissures had increased to 6, and at the time of current writing there are now 8.

Returning home involved a rerouted flight, 7 hour lay-over and a through the night drive back to Durham. Tim is now processing the data, and I am working on negotiating data-sharing agreements with others groups running networks in the area. Hopefully he can soon start researching the seismicity around the eruption, while I can look into producing a detailed image of crustal thickness on the Reykjanes to put the eruption in a broader context. We are now several more Covid tests down and part-way through our mandatory 10 day return quarantine.  While the spring sunshine is taunting me through the window, it seems a small price to pay to have managed to get out to Iceland, get some exciting new data to work on and had to opportunity to witness an incredible natural phenomenon. Thanks to all the Durham colleagues and local collaborators that made it happen! 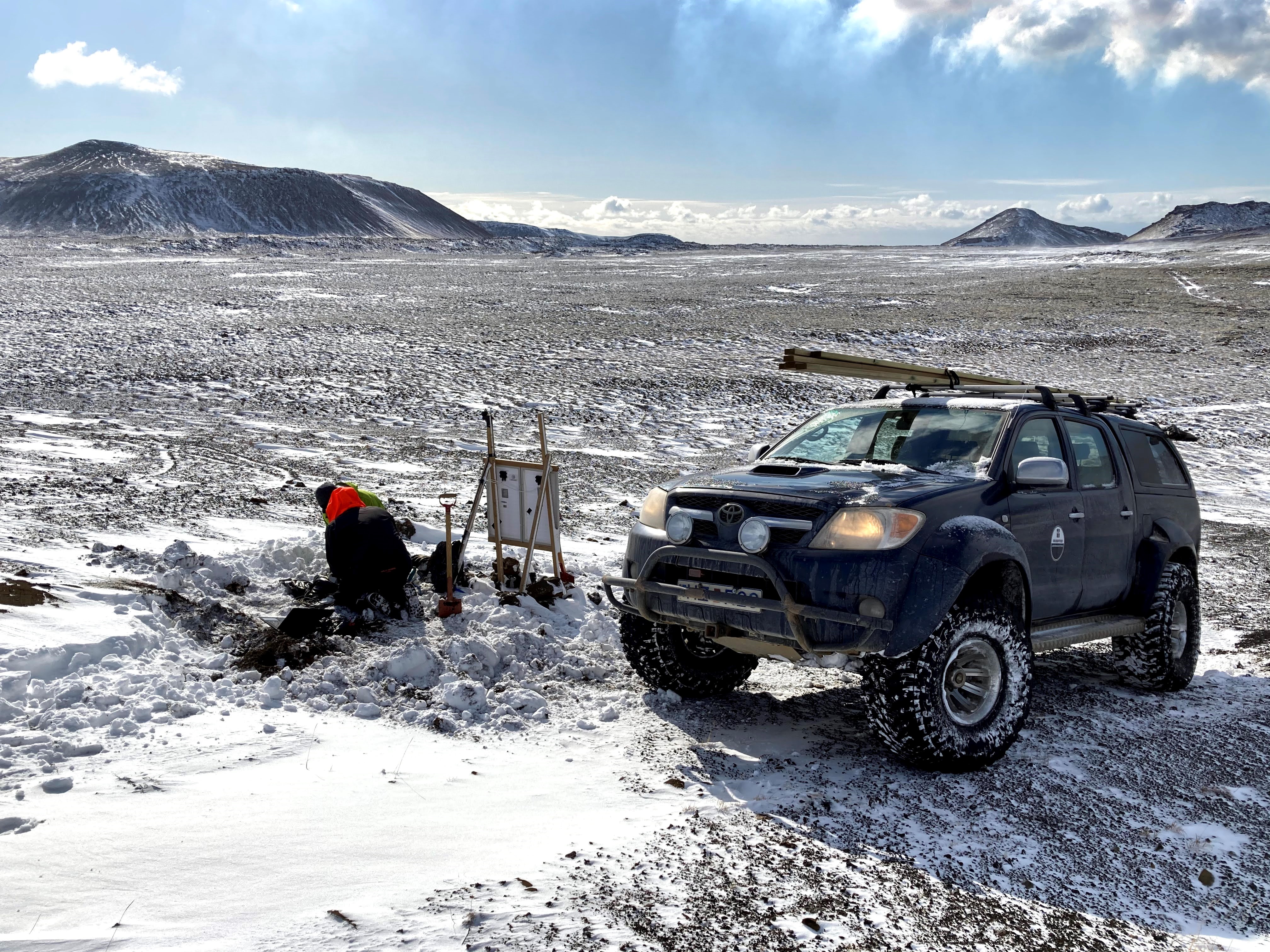