The History of Van Mildert College 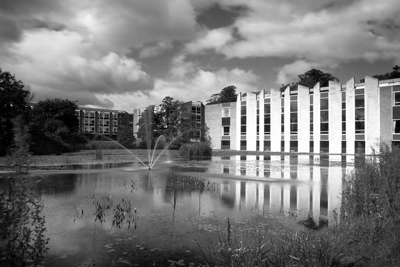 The College is named after William Van Mildert (1765 - 1836), the last Prince Bishop of Durham. An Englishman of Dutch descent, he was instrumental in the founding of Durham University in 1832 and his castle is the present University College. His portrait hangs in our Ann Dobson Hall. From his episcopal arms come the distinctive crossed scythe blades, on a red shield, of the college's coat of arms.

In the 1950s and 1960s there was a great expansion of university education in the UK; Durham's own growth being boosted by its separation from Newcastle in 1963. Between 1959 and 1972, new buildings were acquired and four new colleges created: Grey, Van Mildert (in 1965), Trevelyan and Collingwood.

The College buildings were designed for their setting, including a small lake near which were placed the four original accommodation blocks (Derwent, Wear, Tyne and Tees) and the College's main building containing facilities including the largest Dining Hall in Durham. During the 1960s and 1970s, the Hall was used extensively for concerts featuring many well-known performers, which members of the college enjoyed, without charge, from the landing above the Hall.

In the early 1970s, Van Mildert was the first Durham college to admit female students; with the first formal intake in October 1972; the other colleges soon followed suit.

With additional buildings added over the years, the college's community has grown and now exceeds 1500 with students, staff and tutors from around the world.