Join us at Van Mildert College on Friday 29 April as we host a concert to celebrate the arrival of the College's new Steinway Grand Piano as part of Durham University's move to become an 'All Steinway University'. We are thrilled that David Wakeham (baritone), a Van Mildert College Prowse Fellow, will be joined by Matthew McCullough (bass baritone) and Sarah Baillie (soprano), for what promises to be a very special concert. 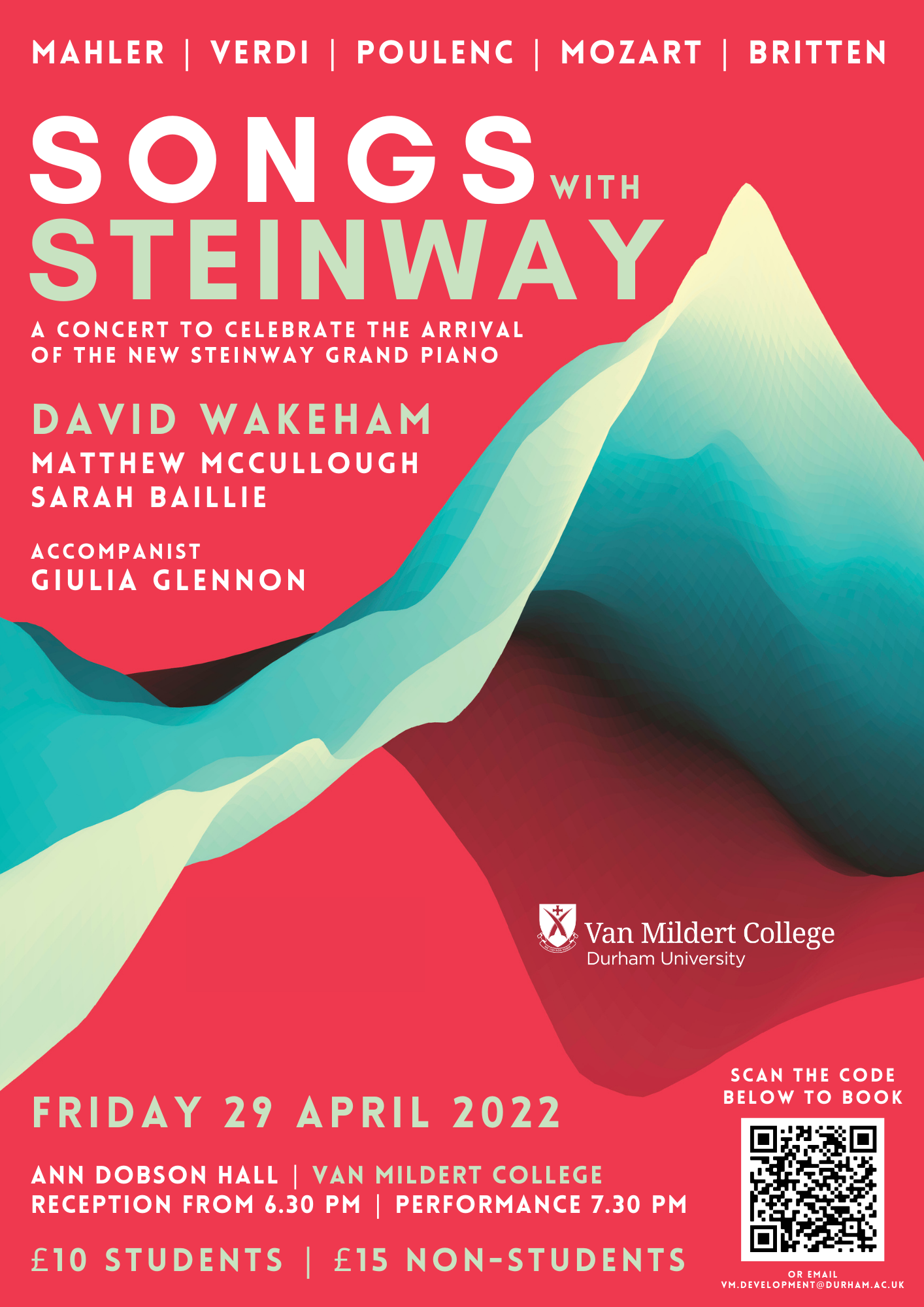 Tickets are now available for purchase at a price of £10 for students and £15 for non students. Tickets include a welcome drink, cheese and charcuterie board, and an evening of wonderful music! Wine can be purchased separately.

Tables for this event will seat 6 people, and we invite you to sign up individually, or in groups. For bookings of more than 6 people, please contact vm.development@durham.ac.uk and we will do our best to ensure your group is accommodated.

More about the performers...

As a Prowse Fellow at Van Mildert College, David has been a strong supporter of the College for a number of years and is delighted to be visiting Durham again after several years of restricted travel. David's full biography can be found on his webpages here.

Matthew is a PhD candidate in Musicology at Durham University researching British composers' responses to World War One and is the current Van Mildert College Trust PhD Scholar. Matthew is particularly interested in music's relationship with death, grief, trauma, and remembrance.

Originally from Ireland, Matthew took up a place to read music at Durham University on a Vice-Chancellor’s Scholarship in 2016 with a Choral Scholarship at Durham Cathedral. After graduating with first class honours Matthew began his postgraduate studies and many will remember him from his role in Opera by the Lake with Sir Thomas Allen in 2020. As an Associate Fellow of Van Mildert College, Matthew is delighted to be singing alongside David and Sarah at this special event. Much more about Matthew can be found here.

Sarah is a London-born soprano and alumna of Van Mildert College. She made her stage debut aged eight in a Royal Opera Company production of Verdi's Otello, closely followed by their 2000 production of Puccini's La Boheme, and an appearance as a treble soloist on an EMI recording of Massenet's Werther with Angela Gheorghiu and Roberto Alagna, and conducted by Antonio Pappano. Sarah graduated from Durham University in 2010 and whilst at the university she became President of Durham Opera Ensemble, with whom she performed regularly, and was named by The Palatinate newspaper as one of 25 Durham graduates to watch for the future.

Sarah went on to study at the Royal Academy of Music with Sarah Walker and Audrey Hyland. She achieved her Master of Arts with distinction, and was awarded an honorary diploma, the DipRAM for excellence in her final recital. She went on to study with English National Opera as part of the Opera Works program, where she made the switch from mezzo to soprano. Sarah's full biography can be found here.

Sarah was a soloist in Opera by the Lake 2020 and is an Associate Fellow of Van Mildert College. We are thrilled to be welcoming her back to Van Mildert!

British pianist and répétiteur Giulia Glennon is a member of the music staff at the State Theatre in Kassel. She studied Music at Oxford University and trained at the Guildhall School of Music and Drama and the Royal Scottish Academy of Music before starting her career in Germany.

She combines her position in Kassel with freelance work as a vocal coach, continuo playing and is often asked to sit on audition and competition panels. Still passionate about musical education and music theatre 25 years into her working career, she lead the team in Kassel as Head of Music Staff from 2002-2021 and was responsible for the singers and répétiteurs on the Opera Studio Programme from it's inception in 2012.