Given the years that have since elapsed, I can still vividly remember my time in the West Building and those annual field trips which seemed to define the year -Ballycastle( with Bruce Proudfoot);Barford( with Brian Roberts) and Germany( with Professor Fisher), where an eerily silent Iron Curtain visit also allowed a visit to the Helmstedt checkpoint and an opportunity to look across to the then East German watch towers, the smiling border guards and those machine guns pointing directly at us! Political geography first-hand!

Graduating in 1967,I  retained links with the department during a PGCE year and returned in 1968/9 to undertake a MA thesis in historical geography under the supervision of Brian Roberts and also act as a departmental demonstrator. What a key role the old departmental Land Rover and support staff played in getting me up to Eggleston and Teesdale  for research and fieldwork!

So, how did a Durham geographical education benefit the workplace ? Well, I taught geography and environmental studies at Doncaster College of Technology, Bretton Hall College of Education and St John’s College, York. This was followed by time spent working in town and country planning with Cumbria County Council, before undertaking a further M.Sc. in Countryside Management at Salford University and following this up with hands-on experience integrating planning and countryside management with the Lancashire Branch of CPRE at Samlesbury  and Worden Halls.

I then moved on to run the countryside planning elements of the Royal Town Planning Institute’s professionally recognised and primarily postgraduate courses in environmental planning at Liverpool Polytechnic/Liverpool John Moores University, between 1979 and 2005.During this period, I was very fortunate  in being able to combine  teaching with practical planning and management work – and some research -  with Lancashire CPRE, the Countryside Commission/Agency in the North West, and the Rural Development Commission in Penrith. As a freelance environmental planner since 2005, the focus was on writing for professional journals; professional involvement on consultations, Planning Aid  and training events with the RTPI, both nationally and in the North- West; assessment of RTPI  membership applications and a number of years organising and running planning training courses for the Institute of Environmental Health.

From my home in Morecambe, I am now able to concentrate on more local environmental issues in a volunteer capacity, including operating the Lancaster & District Conservation Volunteers, in work as varied as wildlife garden management, school nature reserve creation, countryside management skills and being the station adopters  at Bare Lane for the rail company Northern. Here we work on the green infrastructure of the station’s beds, planters and tubs. All physically and mentally very satisfying!

Being not too far from Durham, I still visit old stomping grounds in the North- East and returning to the area illustrates just how much some of  its geography has changed over 50 years!

Looking back and considering what has  and is still  being achieved, much of it can be traced back to a day sometime in 1963 when as a sixth former at Accrington Grammar School, we attended a university recruitment session given by Professor Fisher( who originally came from nearby Darwen),  extolling the virtues of Durham for the importance and quality of its geographical studies in a changing world! It certainly worked for me!

Also a copy of the Library and Map Room publicity and staff list for 1968/9. 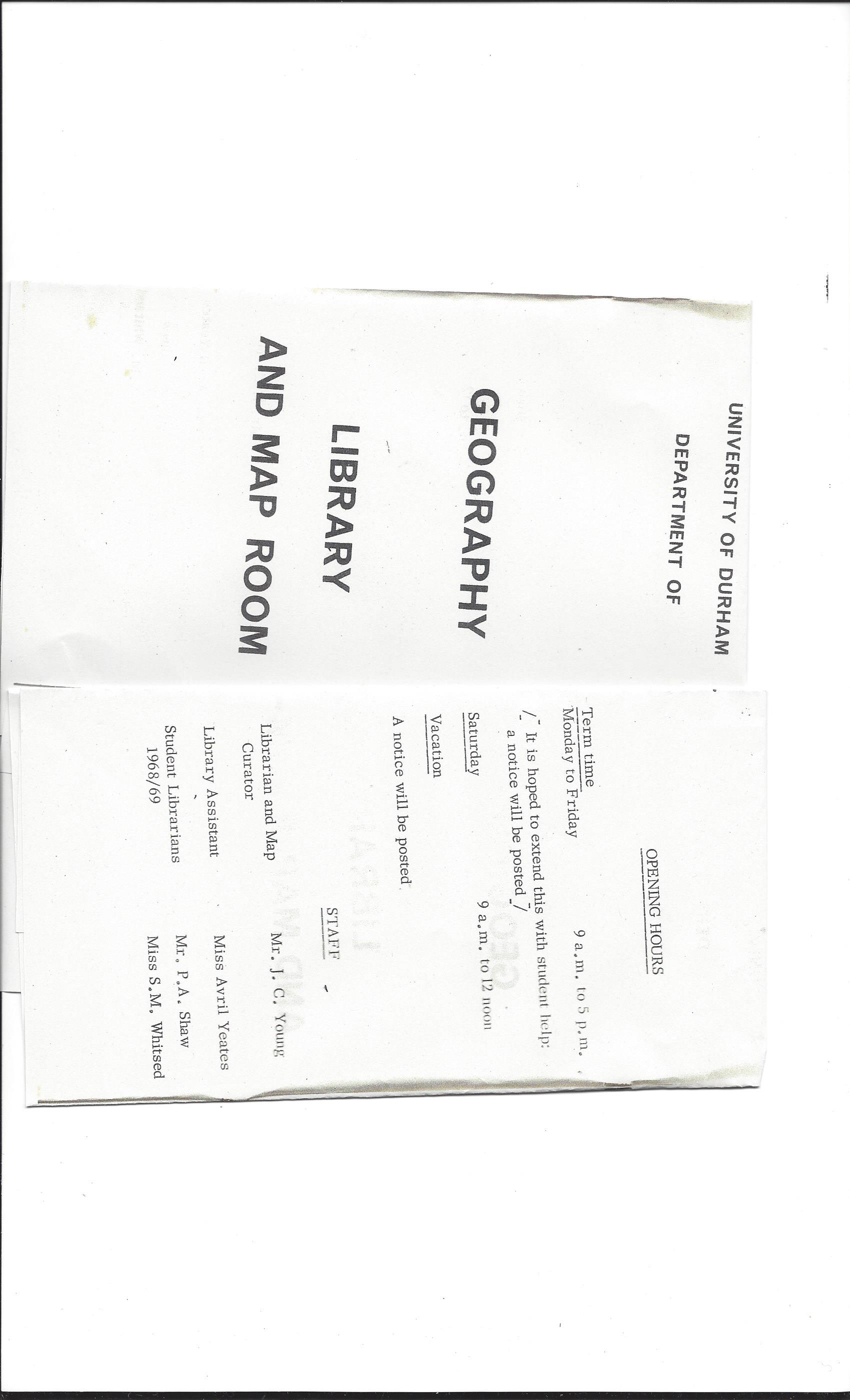