The History of Catholicism is a well-established research cluster in the CCS. It sees the CCS organise, in partnership with the University of Notre Dame, a biennial conference on Early Modern British and Irish Catholicism. International and interdisciplinary in make-up, the conference is a well-established event, with recent feedback describing it as “changing the field”. Each conference has resulted in several publications, including the essay collections, Early Modern English Catholicism: Identity, Memory and Counter-Reformation (Brill, 2017) and British and Irish Religious Orders in Europe, 1560–1800: Conventuals, Mendicants and Monastics in Motion (Boydell & Brewer, Durham University IMEMS Press, 2022). The fourth conference is scheduled to take place in July 2023.

The programme also includes workshops in partnership with other institutions and the Ushaw Lecture Series, which raises awareness of the internationally significant holdings at Ushaw College as part of the university’s residential research library. The work at Ushaw has seen the publication of Treasures of Ushaw College: Durham’s Hidden Gem, which focused on various aspects of the College’s collection and has subsequently featured in national publications. It forms part of the research cluster’s work with Catholic archives across the country, working in conjunction with various bodies to see their continued use and preservation. The programme has been facilitated by several partners, including the St Cuthbert’s Society of Ushaw College, the Congregation of Jesus, the Canonesses of the Holy Sepulchre, and Sir Christian Sweeting. These partnerships have resulted in a series of fellowships in the History of Catholicism.

The Centre for Catholic Studies is the home of ISHWRA, an international network of scholars whose specific focus is to promote and facilitate enquiry into the history of Catholic female religious through a global lens.

We have several medieval specialists closely associated with the CCS, with research and teaching interests in the areas of early and late medieval theology and scriptural exegesis, particularly in the 12th and 13th centuries and the patristic periods. We work in partnership with the Institute of Medieval and Early Modern Studies (IMEMS), one of the most diverse and dynamic centres of medieval and Renaissance studies in the world. The Institute includes 45 scholars across 13 departments and three faculties, as well as a vibrant community of postgraduates. In 2013, the CCS took the lead in organising an international conference on Gospel, Text, and Commentary in Medieval Perspective. In this we were partnered with IMEMS and Loyola University Chicago, in association with Bede's World, DePaul University, Chicago, and the Bible Society.

Research Projects in the History of Catholicism

A prosopographical study of the English and Welsh Benedictines in exile, 1553-1800

Since 2015, the ‘Monks in Motion’ project team has been investigating the activities and membership of the English and Welsh Benedictines, 1553–1800, exploring their changing political role in transnational familial and intellectual networks. The project saw the creation of an open source, searchable electronic database of all English and Welsh Benedictines from the period, including those who were early leavers or did not pass the selection process. 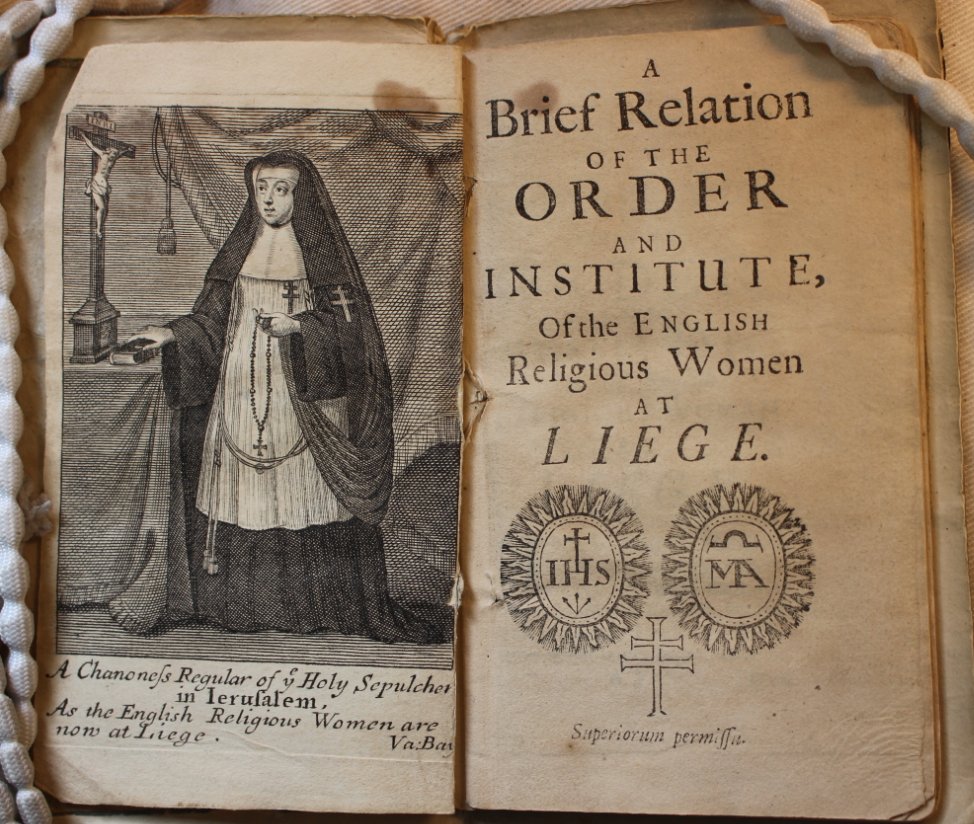 The CCS partnered with the Canonesses of the Holy Sepulchre in 2014 to launch a Post-Doctoral Fellowship in Early Modern English Catholicism (1500-1800) to analyse the previously almost unexploited archive of the English Sepulchrines. Dr Hannah Thomas, historian and archivist, held the post for its duration until 2017. October 2017 saw the launch of Dr Thomas's book from the project: The Secret Cemetery: A Guide to the Burial Ground of the English Canonesses of the Holy Sepulchre in the Parishes of Boreham and Springfield, Chelmsford (Gracewing, 2017). It follows the English Sepulchrines from their foundation in exile in Liege in 1642 to their return to England at the end of the eighteenth century and their eventual settling in Essex (England), exploring the community's approach to death and burial during these transitional times.

The Sepulchrines generously funded a second fellowship starting in January 2020. Dr Cormac Begadon is investigating the interaction of the Sepulchrines with Enlightenment thought, c.1750–1820. His research is examining the canonesses as Englishwomen at the heart of the European Enlightenment, in the shadow of revolutionary thought and events, illustrating how they functioned as agents of change in the reciprocal transfer of ideas between Europe and England through their work as educators, whilst also examining the ways in which their own community was affected and shaped by contemporary religious, philosophical and political movements.

Dr Sarah Barthélemy is researching the history of the Congregation of La Retraite (c.1650–1820), more specifically on the full participation of women in the elaboration of a spirituality inspired by Ignatius of Loyola; the role of the laity in this experience of religious life, as well as their concrete action of financial and material support; and finally the way in which the project of religious life that Catherine de Francheville had the intuition for survived through the centuries, with a special focus on the tensions brought by the French Revolution.

This is a three-year fellowship created by the CCS and the Franciscan Missionaries of the Divine Motherhood (FMDM) and held by Dr Brian Casey. The aim is to explore the history of the Congregation as part of global Catholicism and within the context of shifting understandings of the Franciscan charism.

The origins of the FMDM begin in 1884 in London when three Third Order Secular Franciscans became religious and, after a period of expansion, founded a community in Aldershot, Hampshire. This was followed by the rapid growth of the new movement to the point where missionaries were sent to China and Zambia, the Congregation becoming present in all the continents by c.1950. In 1956, Ladywell in Godalming became the Congregation’s Motherhouse.

The archives at Ladywell represent an important body of material evidence for research of the history of global Catholicism, and the Franciscan contribution to that movement. Brian is researching and analysing this largely unexplored archive in order to develop a picture of the FMDM as a global congregation, to link the history of the Congregation to the wider global context, and to highlight the unique significance of the archival collections for the study of the history of Catholicism in this period, and the importance of the Franciscan vision that motivates its mission. With the primary focus of placing the FMDM and the Franciscan charism in the context of global Catholicism, the fellowship is allowing for the exploration of archives in various sites of FMDM activity around the world.

Dr Eilish Gregory is researching the history of the Little Company of Mary (LCM). The LCM was founded by Mary Potter in Hyson Green, Nottingham, UK, in 1877. The initial ministry focus was to serve the poor, especially visiting the sick and dying in the surrounding, deprived area. By 1882, the sisters had a presence in Rome and, from 1885 to 1937, foundations were made across the UK, Australia, Ireland, USA, Malta, South Africa, Argentina, New Zealand, and modern-day Zimbabwe. The congregation is now found in Italy, England, Ireland, South Africa, Zimbabwe, Australia, New Zealand, South Korea, Tonga, the Philippines, and the USA.

While work has been carried out on the activities of the Congregation’s foundress, Mary Potter, less scholarly attention has been paid to its subsequent history, particularly the rapid development of the Congregation into a global presence. The fellowship is focusing on that growth, particularly the first 60 years, until c.1940. It is considering the early leaders of the Congregation, the international foundations, and the stories of the sisters who pioneered these initiatives. The project focuses on the direction taken by the Congregation in these localities, away from Mary Potter’s direct leadership, exploring the story from a cultural, social, and spiritual perspective, and also reflecting on the continuing social and ecclesial relevance of the story. The project is global in scope, and seeks to bring to life the relevance of the members of the LCM who helped shape its mission in the early decades of its foundation, as well as building upon the original objectives of Potter. 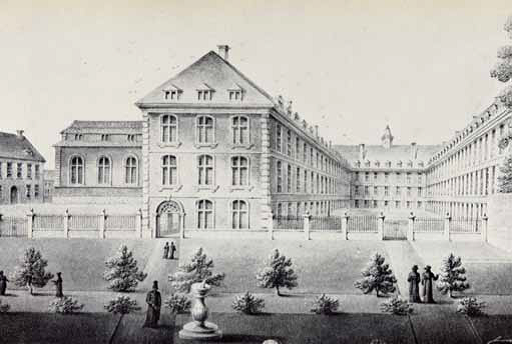 In 2018, the Centre for Catholic Studies, Ushaw College, and St Cuthbert's Society of Ushaw presented a conference marking the 450th anniversary of the founding of the English College at Douai. At Ushaw College, the modern-day successor of the institution at Douai, 15 invited international speakers spoke on the topic of ‘450 Years Pioneering Catholic Education: Past, Present, Future’.

The conference placed the college’s achievements from its founding in 1568 in the wider context, highlighting how the college has adapted to the changing world in which it has operated, pioneering innovative ways of formation and Catholic life. Following the Council of Trent, the English College at Douai was the launchpad for a missionary endeavour on the western fringes of Europe, one mirrored by other nations in the area. As well as being part of the wider European and, indeed, global Church, the college was also a key part of the Catholic exile movement, in which women featured prominently.

Each contributor engaged with different facets of these developments, both during the exile period and after the college’s replanting at Ushaw. Moving chronologically, the conference ended with papers considering the challenges facing the Church and seminaries today and into the future, exploring ways in which the pioneering spirit of the English College at Douai is again being adapted for the 21st century. Keynote presentations can be found on the CCS’s Soundcloud page.