A selection of recent publications by colleagues in the Department of Anthropology. 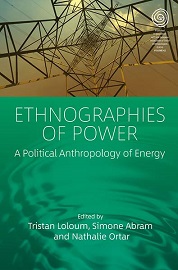 Ethnographies of Power: A Political Anthropology of Energy

Energy related infrastructures are crucial to political organization. They shape the contours of states and international bodies, as well as corporations and communities, framing their material existence and their fears and idealisations of the future. Ethnographies of Power brings together ethnographic studies of contemporary entanglements of energy and political power. Revisiting classic anthropological notions of power, it asks how changing energy related infrastructures are implicated in the consolidation, extension or subversion of contemporary political regimes and discovers what they tell us about politics today. 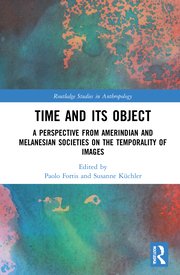 Time and Its Object: A Perspective From Amerindian and Melanesian Societies on the Temporality of Images

This volume examines the way objects and images relate to and shape notions of temporality and history. Bringing together ethnographic studies from the Lowlands of Central and South America and Melanesia, it explores the temporality inhering in images and artefacts from a comparative perspective. The chapters focus on how peoples in both regions ‘live in’ and ‘navigate’ time each through their distinctive systems of images and the processes and actions by which these come to be manifest in objects. With original theoretical and ethnographic contributions, the book is valuable reading for scholars interested in visual and material culture and in anthropological approaches to time. 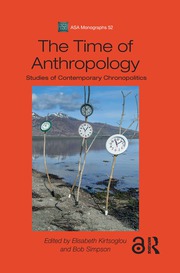 The Time of Anthropology: Studies of Contemporary Chronopolitics

The Time of Anthropology provides a series of compelling anthropological case studies that explore the different temporalities at play in the scientific discourses, governmental techniques and policy practices through which modern life is shaped. Together they constitute a novel analysis of contemporary chronopolitics. The contributions focus on state power, citizenship, and ecologies of time to reveal the scalar properties of chronopolitics as it shifts between everyday lived realities and the macro-institutional work of nation states. The collection charts important new directions for chronopolitical thinking in the future of anthropological research. 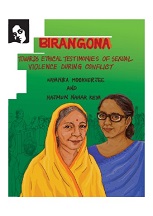 Birangona: towards ethical testimonies of sexual violence during conflict

Labonno/Labony needs to do a school project on family memories of 1971, the Bangladesh War. When coming to ask her grandmother, she wakes the latter from one of her frequent nightmares. What follows is her grandmother’s (Nanu/Rehana) narration of the history of ‘birangona’ (brave women), the term given by the Bangladesh government in 1971 to honour the women who had been raped during the war. Her mother, Hena, also tells her of the Oral History Project through which they tried to collect testimonies. This leads them to talk about the various points that need to be covered for an ethical guidance to record testimonies of sexual violence during conflict (svc). But hidden in these discussions of the guidelines Labonno discovers an intricate secret family history. What could that secret be? What would Labonno feel when she hears of that secret? What will Labonno do in the future about her family and the nation’s history? 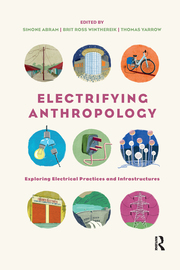 What kinds of expertise and knowledge relate to electricity, and where is the space for alternative voices? How can the new roles for electricity in social and cultural life be acknowledged? How can we speak about ‘it’ in its own right while acknowledging that electricity is not one thing? This book re-describes electricity and its infrastructures using insights from anthropology and science and technology studies, raising fascinating questions about the contemporary world and its future. Through ethnographic studies of bulbs, bicycles, dams, power grids and much more, the contributors shed light on practices that are often overlooked, showing how electricity is enacted in multiple ways. Electrifying Anthropology moves beyond the idea of electricity as an immovable force, and instead offers a set of potential trajectories for thinking about electricity and its effects in contemporary society. With new contributions on an emerging area of research, this timely collection will be of value to students and scholars of anthropology, science and technology studies, geography and engineering. 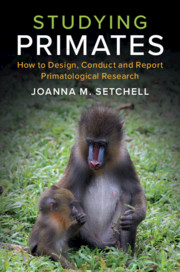 dying Primates: How to Design, Conduct and Report Primatological Research

Primatology draws on theory and methods from diverse fields, including anatomy, anthropology, biology, ecology, medicine, psychology, veterinary sciences and zoology. The more than 500 species of primate range from tiny mouse lemurs to huge gorillas, and primatologists collect data in a variety of environments including in the field, research facilities, museums, sanctuaries, zoos, and from the literature. The variability in research interests, study animals and research sites means that there are no standard protocols for how to study primates. Nevertheless, asking good questions and designing appropriate studies to answer them are vital to produce high quality science. This accessible guide for graduate students and post-doctoral researchers explains how to develop a research question, formulate testable hypotheses and predictions, design and conduct a project and report the results. The focus is on research integrity and ethics throughout, and the book provides practical advice on overcoming common difficulties researchers face. 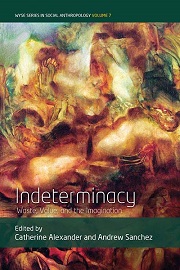 Indeterminacy: Waste, Value, and the Imagination

What happens to people, places and objects that do not fit the ordering regimes and progressive narratives of modernity? Conventional understandings imply that progress leaves such things behind, and excludes them as though they were valueless waste. This volume uses the concept of indeterminacy to explore how conditions of exclusion and abandonment may give rise to new values, as well as to states of despair and alienation. Drawing upon ethnographic research about a wide variety of contexts, the chapters here explore how indeterminacy is created and experienced in relationship to projects of classification and progress. 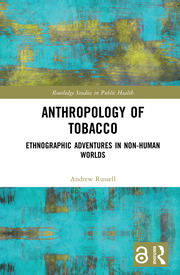 Bringing together a range of perspectives from the social and natural sciences as well as the arts and humanities, Anthropology of Tobacco weaves stories together from a range of historical, cross-cultural and literary sources and empirical research. These combine with contemporary anthropological theories of agency and cross-species relationships to offer fresh perspectives on how an apparently humble plant has progressed to world domination, and the consequences of it having done so. It also considers what needs to happen if, as some public health advocates would have it, we are seriously to imagine 'a world without tobacco' 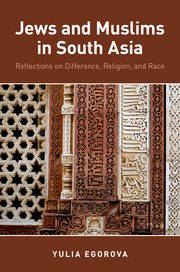 Jews and Muslims in South Asia: Reflections on Difference, Religion and Race

This book explores the history of Judaism and Islam in Southeast Asia. It examines how Jewish and Muslim communities interact in ways that don't fit Western stereotypes. It reveals how the South Asian Jewish experience has been used as a political tool by the Hindu right. 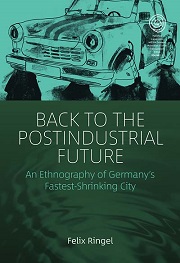 Back to the Postindustrial Future: An Ethnography of Germany's Fastest-Shrinking City

How does an urban community come to terms with the loss of its future? The former socialist model city of Hoyerswerda is an extreme case of a declining postindustrial city. Built to serve the GDR coal industry, it lost over half its population to outmigration after German reunification and the coal industry crisis, leading to the large-scale deconstruction of its cityscape. This book tells the story of its inhabitants, now forced to reconsider their futures. Building on recent theoretical work, it advances a new anthropological approach to time, allowing us to investigate the postindustrial era and the futures it has supposedly lost 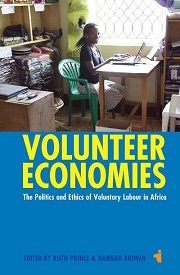 Volunteer Economies: The Politics and Ethics of Voluntary Labour in Africa

Across Africa today, as development activities animate novel forms of governance, new social actors are emerging, among them the volunteer. Yet, where work and resources are limited, volunteer practices have repercussions that raise contentious ethical issues. What has been the real impact of volunteers economically, politically and in society? The interdisciplinary experts in this collection examine the practices of volunteers - both international and local - and ideologies of volunteerism. They show the significance of volunteerism to processes of social and economic transformation, and political projects of national development and citizenship, as well as to individual aspirations in African societies. These case studies - from South Africa, Lesotho, Kenya, Tanzania, Zambia, Sierra Leone and Malawi - examine everyday experiences of volunteerism and trajectories of voluntary work, trace its broaderhistorical, political and economic implications, and situate African experiences of voluntary labour within global exchanges and networks of resources, ideas and political technologies 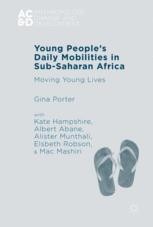 This book explores the daily mobilities and immobilities of children and young people in sub-Saharan Africa. The authors draw on findings from rural and urban field research extending over many years, culminating in a 24-site study across three African countries: Ghana, Malawi, and South Africa. Wider reflections on gender, relationality, the politics of mobility, and field methodology frame the study. By bringing together diverse strands of a complex daily mobilities picture-from journeys for education, work, play/leisure and health, to associated experiences of different transport modes, road safety, and the virtual mobility now afforded by mobile phones-the book helps fill a knowledge gap with crucial significance for development policy and practice. 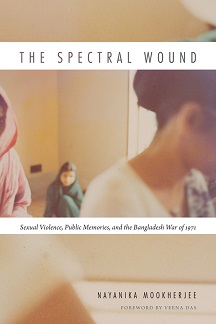 The Spectral Wound: Sexual Violence, Public Memories, and the Bangladesh War of 1971

Following the 1971 Bangladesh War, the Bangladesh government publicly designated the thousands of women raped by the Pakistani military and their local collaborators as birangonas, ("brave women”). Nayanika Mookherjee demonstrates that while this celebration of birangonas as heroes keeps them in the public memory, they exist in the public consciousness as what Mookherjee calls a spectral wound. Dominant representations of birangonas as dehumanized victims with disheveled hair, a vacant look, and rejected by their communities create this wound, the effects of which flatten the diversity of their experiences through which birangonas have lived with the violence of wartime rape. In critically examining the pervasiveness of the birangona construction, Mookherjee opens the possibility for a more politico-economic, ethical, and nuanced inquiry into the sexuality of war. 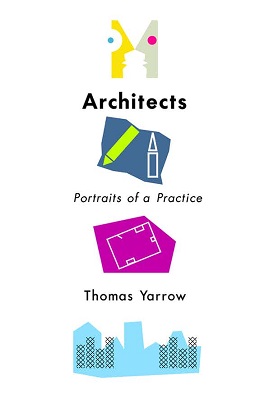 What is creativity? What is the relationship between work life and personal life? How is it possible to live truthfully in a world of contradiction and compromise? These deep and deeply personal questions spring to the fore in Thomas Yarrow's vivid exploration of the life of architects. Yarrow takes us inside the world of architects, showing us the anxiety, exhilaration, hope, idealism, friendship, conflict, and the personal commitments that feed these acts of creativity.

Architects rethinks "creativity," demonstrating how it happens in everyday practice. It highlights how the pursuit of good architecture, relates to the pursuit of a good life in intimate and individually specific ways. And it reveals the surprising and routine social negotiations through which designs and buildings are actually made. 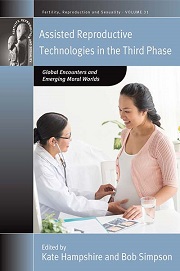 Following the birth of the first “test-tube baby” in 1978, Assisted Reproductive Technologies became available to a small number of people in high-income countries able to afford the cost of private treatment, a period seen as the “First Phase” of ARTs. In the “Second Phase,” these treatments became increasingly available to cosmopolitan global elites. Today, this picture is changing — albeit slowly and unevenly — as ARTs are becoming more widely available. While, for many, accessing infertility treatments remains a dream, these are beginning to be viewed as a standard part of reproductive healthcare and family planning. This volume highlights this “Third Phase” — the opening up of ARTs to new constituencies in terms of ethnicity, geography, education, and class. 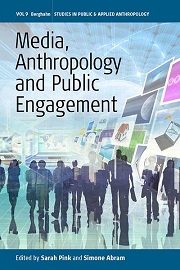 Contemporary anthropology is done in a world where social and digital media are playing an increasingly significant role, where anthropological and arts practices are often intertwined in museum and public intervention contexts, and where anthropologists are encouraged to engage with mass media. Because anthropologists are often expected and inspired to ensure their work engages with public issues, these opportunities to disseminate work in new ways and to new publics simultaneously create challenges as anthropologists move their practice into unfamiliar collaborative domains and expose their research to new forms of scrutiny. In this volume, contributors question whether a fresh public anthropology is emerging through these new practices. 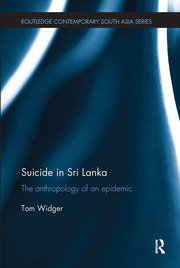 Suicide in Sri Lanka: The Anthropology of an Epidemic

Why people kill themselves remains an enduring and unanswered question. With a focus on Sri Lanka, a country that for several decades has reported ‘epidemic’ levels of suicidal behaviour, this book develops a unique perspective linking the causes and meanings of suicidal practices to social processes across moments, lifetimes and history.