Mobilizing experiences of resistance and survival: reflections from archaeology and critical heritage studies on the Holocaust Memorial Day

Archaeology is a discipline that studies humanity through material culture, regardless of time and place. Yet, we rarely think of archaeologists studying events that occurred in our lifetimes. Despite the abundance of testimonies, as well as visual and written accounts from the last hundred years or so, stories of contemporary everyday life have been generally absent from broader historical narratives. In many cases, people who have suffered from recent processes of marginalisation and deliberate erasure left nothing but material traces. The last century was marked by new and faster communication technologies, urban expansion, and increased industrial production. These transformations enabled more efficient bureaucracies, but also increased the potential effects of technology on human lives. This complex material process enabled nation-states to pursue industrialised warfare and achieve a greater control over social groups, leading to forms of unrestricted violence that characterised conflicts such as the Spanish Civil War and the Second World War (González-Ruibal 2019).

In recent years, archaeologists have been looking at the material evidence of modern conflict and mass violence. Our motivations are diverse. However, we can think of two main reasons behind our focus on such difficult topics. First, we share the idea that it is important to document and analyse the ways in which highly technological, organised violence has been shaping the world. Entire cities have been bombed and wiped out in recent wars, constraining the lives of survivors and their ways of dwelling for generations to come. Military organisation and the development of deadly technologies enabled repression and mass murder in an unprecedented scale, producing a trail of camps, mass graves, and painful memories that continue to affect the present (Theune 2018). Archaeological work critically assesses the ways through which conflict and mass violence was materialised. It also helps identifying and documenting aspects of organised violence that have been purposely concealed in strategies of social forgetting. Archaeologists have been working on sites of Nazi atrocities across Europe, recovering detailed evidence of the Holocaust and other genocidal practices. When it is properly conducted, this kind of archaeological work is done in collaboration with survivors and community-members, paying close attention to their political and religious sensibilities (Colls 2015).

On the other hand, we use archaeology as a tool to deal with the complex legacies of modern conflict and mass violence in the present, engaging in broader discussions on redress and social justice. By focusing on victims’ suffering, our work provides a critical tool to contextualise their experience and dignify their memory (Bernbeck 2018). In Spain, for example, archaeologists have been responding to the demands of families and NGOs by exhuming the remains of people who were murdered for political reasons in the context of the Spanish Civil War or its aftermath. Archaeologists resubjectivize those remains through their work, returning them to relatives whenever possible.  The banal, everyday objects we recover from such contexts are evocative of personal stories, and emotions that make us empathise with those whose lives were shortened by force (González-Ruibal 2020). Archaeologists commit to this kind of work as a political strategy—by building up critical thought in today’s society, or by redressing what has occurred not so long ago, we want to make sure that such tragedies will not happen again.

Experiences of resistance and survival in Drežnica, Croatia

In Croatia, we chose to address the Second World War and mass violence through a different lens. By looking at a small rural community, we mobilize memories of resistance to political violence and genocidal practices in order to discuss ongoing forms of violence along the lines of ethnicity, and nationality in Europe.

The interdisciplinary heritage project Drežnica: Traces and Memories 1941-1945 aims at locating and documenting partisan camps that were constructed in the mountainous region of Drežnica, Croatia during the Second World War, as well as memories and memorial sites related to the period. In April 1941, Nazi Germany invaded Yugoslavia. Axis forces, including their Croatian collaborators, were opposed by organized resistance, especially in regions whose inhabitants were targeted in processes of ethnic cleansing and genocide. Croatian fascists, also known as Ustaše, subjected Jewish, Serbian, and Roma communities to forced displacement, incarceration, and mass murder mirroring what Nazis were already doing across Europe. The genocide of the Serbian minority was particularly felt in ethnically diverse regions. Serbian villages like Drežnica were the first to be attacked, but also the first to join the partisan resistance.

During the war, the forests of Drežnica were liberated by local peasants and partisans and turned into a stronghold and base of operations. However, following a line of interethnic solidarity, this stronghold was not strictly military inasmuch as it became a territory where partisans, villagers and other civilians cared for one another. The resistance movement was materialized in a vast network of military bases, hospitals, shelters and refugee camps that were constructed between 1941-1945 with the support of the local community. War refugees, partisans and political exiles arrived in the region in order to escape persecution elsewhere in Yugoslavia, and encountered villagers who were eager to provide support in spite of their own material circumstances. The network of camps included hospitals such as the Hospital No. 7 on mount Javornica (Jančić-Starc 1971). 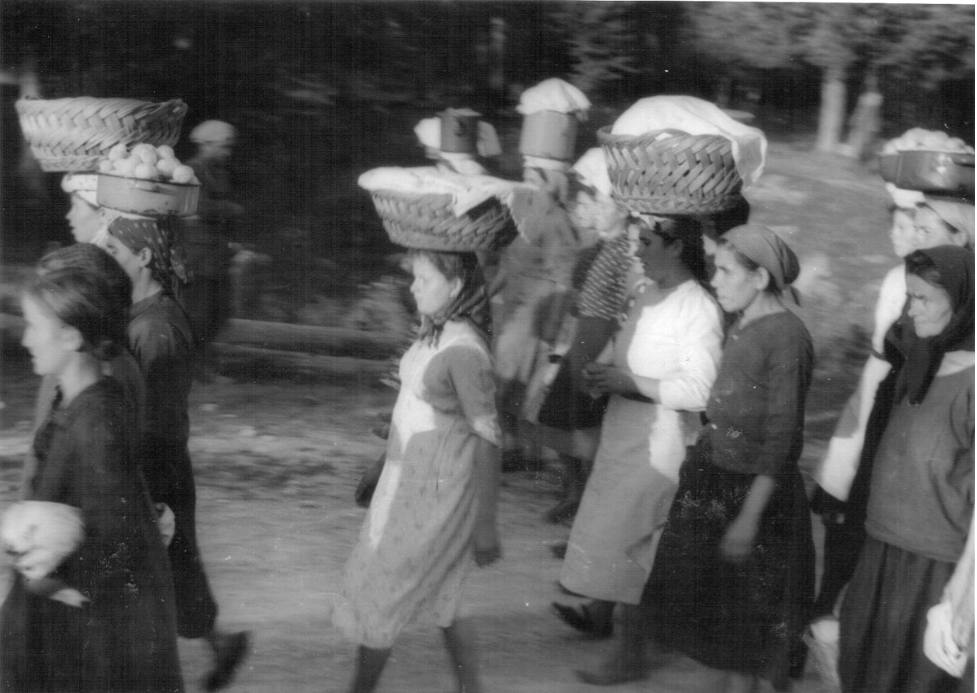 It was operated by a multiethnic staff of doctors and nurses – Jews, Serbs, Croats, Slovenes, Austrians, Czechs, Slovaks, and Italians – that were either volunteers or refugees themselves. Among the last survivors of the hospital’s staff is Vera Švabenic-Zoričić, née Schwabenitz, who will turn 100 years old this year. Born in a Jewish family of Zagreb, she was forced to leave Croatia’s capital at age 19 to escape antisemitic persecution. She became a nurse in Drežnica, and later joined the medical staff of a partisan division. Unlike her partisan sister Jelka, who was killed in Bosnia in 1942, Vera managed to survive thanks to the organized resistance. 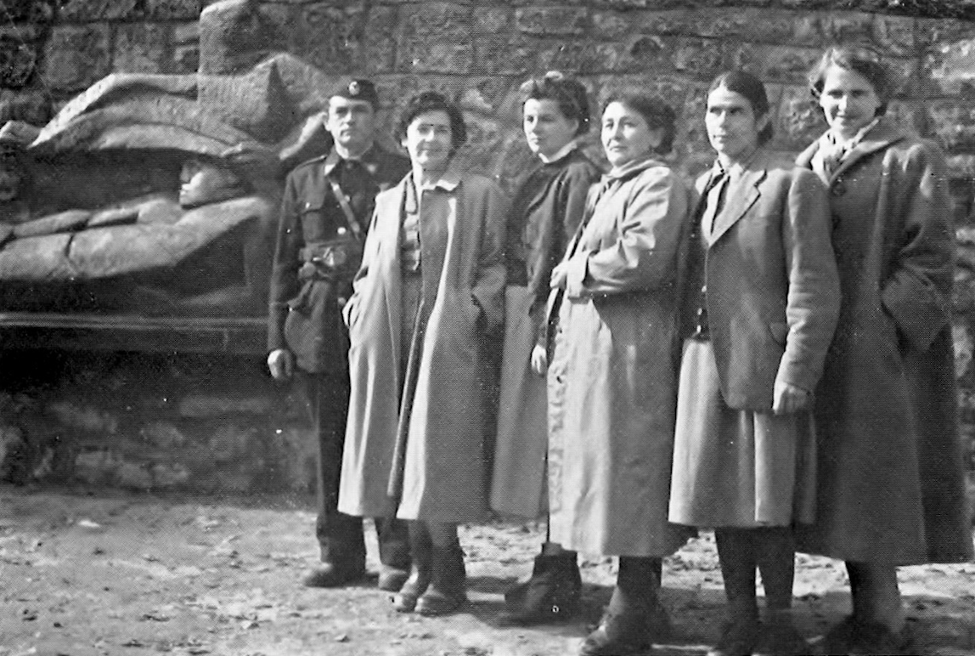 The partisan hospital staff in 1956. Vera Švabenic-Zoričić is second from left (Jančić-Starc 1971).

In 1964, another partisan and Holocaust survivor Slavko Goldstein returned to the forests of Drežnica to film a documentary about the villagers’ war experiences. Throughout the film, the director brings visibility to the community’s impoverished circumstances and provokes the viewers with an unspoken question: how was it possible for a modest community like Drežnica’s to support a guerrilla army and the refugees that arrived in large numbers? Our project aims at responding to this question through the combination of archaeological, anthropological, and art history methodologies. Since 2018, we have been working with the community to document its heritage and to assess the conservation of the many monuments and memorials built after the war to commemorate Drežnicans solidarity.

The archaeology team has been surveying the region while looking for partisan camps and refugee shelters. In the summer of 2020, our multinational team of volunteers and professionals based in Croatia, Portugal, Spain, and the UK, excavated one of the camps used by partisans in 1941. This camp consisted of a modest peasant home that had been borrowed from a local supporter, Nikola Tomić, a former immigrant in the United States. The camp was eventually discovered and attacked by the Italian army. Tomić was punished along with hundreds of civilians, who were killed during the occupation for supporting the resistance.

We also excavated a small cave that functioned as a temporary refugee shelter during the frequent attacks to Drežnica. In both sites, we have recovered evidence of everyday activities, in addition to war materiel. This materiality helps contextualising the difficult experiences of those who lived through the conflict, humanising war narratives that usually focus on military events. The excavation in the cave of Drežničko polje was particularly significant. We found a needle, fragments of a manual hair clipper, a boot heel, and a part of a bicycle rubber tire. This assemblage attests to the temporary occupation of the cave and shows that people continued to live their lives in the village itself. Villagers and people on the move only used the cave when they absolutely needed. On the other hand, these modest objects also illustrate the reality of people who needed to be ready to depart their homes in order to find better, safer places. Forests, caves, and lakes were trustworthy allies for Drežnicans who, unlike unwanted visitors, knew their way around the natural landscape. 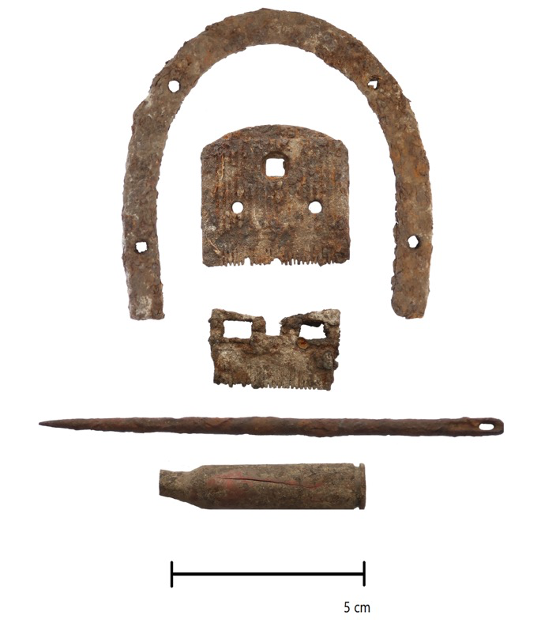 Archaeological findings from Drežnica interpellate us in a time when refugees and other people on the move continue to cross the forests while attempting to build better lives for themselves in Western Europe. They arrive from distant places in Central and South Asia, the Middle East and North Africa, and walk the same paths as those who escape multiple persecutions just over eighty years ago. Yet, in the context of an increasingly securitized European Union, people on the move are confronted by heavily patrolled borders. Security apparatuses divide the peoples of the former Yugoslavia and endanger the lives of those who seek better lives.

We are commemorating Drežnica’s solidarity through these excavations. Yet, our goal is something else. By mediating those experiences in the present, we wish to address the ongoing hospitality crisis in Europe and the resurgence of an extreme-right rhetoric that is feeding on racial, ethnic and nationalistic intolerance once again. The Serbian community of Drežnica faces new forms of dispossession and marginalization thanks to historical revisionist narratives, which are behind the destruction of many memorial sites and is once again threatening the region’s ethnic diversity.

As archaeologists, we show that poor rural communities provided support for those who needed the most, despite the difficult circumstances. Why would we not do the same today? On this Holocaust Memorial Day, it is important that we reflect on the traces of resistance and survival that we encounter as archaeologists and heritage practitioners, and try to find ways to mobilize them in our own contemporary struggles.

González-Ruibal, A. 2019. An Archaeology of the Contemporary Era. London: Routledge.

González-Ruibal, A. 2020. The Archaeology of the Spanish Civil War. London: Routledge.

Theune, C. 2018. A Shadow of War. Archaeological Approaches to Uncovering the Darker Sides of Conflict from the 20th Century. Leiden: Sidestone.