Medieval and post-medieval earthquakes in Europe

Seismic catalogues of historic events play a significant role in hazard mitigation across the European Union. Based mainly on documentary surveys or driven from an earth-science perspective, the archaeological verification of seismic activity remains under-researched. In 2013 we reviewed the existing evidence for the archaeology of environmental hazards, risk and resilience which was published in Natural Hazards 69(1). As we discovered, not only did communities respond continually to environmental hazards, their effects were also felt sometimes across the whole of Europe.

The aim of ArMedEa (“The ARchaeology of MEDieval EArthquakes”; April 2014 – March 2016) was to develop the analysis of the physical impacts of earthquakes, tsunamis and seismically-induced landslide during the later Middle Ages (here 1000-1550 AD). Our work was at a European scale and adopted a specifically archaeological approach to collate and integrate information from a wide range of sources including standing buildings, buried stratigraphical sequences and palaeoenvironmental data. We undertook fieldwork in the Azores, southern Spain (three fieldwork seasons with Durham students), Italy and Cyprus, the results of which will be published shortly. These works include (i) the publication of the excavation conducted at El Castillejo (Granada, Spain) which identified and dated the oldest historical earthquake for the region of Granada and (ii) the result of the archaeological investigation of the seismically-induced landslide which destroyed Vila Franca do Campo, Azores (Portugal) in 1522.

All the research papers developed out of this project are fully referenced on the ArMedEa blog. Highlights include papers on: techniques of recording at seismically-affected sites in a 2018 paper in Digital Applications in Archaeology and Cultural Heritage; a case study in damaged buildings published in the International Journal of Architectural Heritage 11(5); and a major research paper on the reliability of the evidence for later medieval earthquakes published in 2016 in Natural Hazards 84(3).

We are currently completing 3 years research funded by the Leverhulme Trust entitled "Risk and resilience: exploring responses to earthquakes in Europe: 1200-1755". This project is investigating the evolution of responses to seismic disasters in Europe from the 13th century to the Great Lisbon earthquake (1755). The project is designed around a number of key-questions such as: what is the historical, archaeological and architectural evidence for post-disaster recovery in Europe in the period 1200-1755? How did communities react and how did they prepare for the future? Do geographically distant pre-industrial societies react to seismic hazards in similar ways? Can we trace the emergence of different seismic cultures in pre-industrial Europe? What are the key factors which shape the human response to a pre-industrial earthquake and the ability of a region to recover? Was Lisbon 1755 truly an innovative moment in risk management or merely the climax of a much longer tradition of responses developed in Europe over several centuries? Our aim is to bring together a wealth of data drawn from scientific, historical, linguistic and geographic sources to assess medieval cultural transformation across Europe in response to disasters. Although this is a vital aspect of historical European development, it represents a new thematic focus in medieval studies, which until recently has not adequately considered the impact of unpredictable factors in the natural environment on the development of societies and social stresses, nor have these yet been analysed for supra-national comparanda and patterning, at least not from an archaeological perspective.

Highlights include papers on: the analysis of historic responses before, during and after large European earthquakes published in 2017 in Quaternary International 446; forthcoming papers on our fieldwork results, and; a major edited volume  published in 2020 by Routledge: C Gerrard, P Forlin and P Brown (eds) 2020 Waiting for the End of the World? New perspectives on natural disasters in Medieval Europe, Routledge, London. This edited collection has its origins in the Society for Medieval Archaeology conference ‘Waiting for the End of the World: Perceptions of Disaster and Risk in Medieval Europe’ which took place on 2–4th December 2016 at Rewley House in Oxford. It contains chapters from researchers based in France, Italy, the Netherlands, Spain, Switzerland, and the United States. Peter Brown, one of the editors of the volume, recently completed his AHRC-funded PhD on severe medieval weather events and floods.

Image above: Tents and wooden barracks surrounding Siena al tenpo de tremuoti (at the time of the earthquake) in 1467. Drawing by Francesco di Giorgio Marti 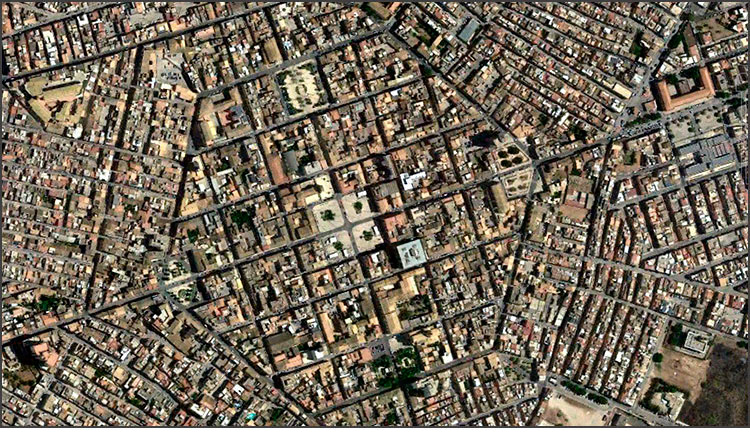 Image above: The new town of Avola Nuova (Sicily, Italy), built after the seismic disaster of 1693