A biography of power: Bagendon ‘oppidum’ and the Late Iron Age-Roman transition

The large earthwork complexes, known as oppida, remain an enigma – what role did they play in transformations at the turn of the 1st millennium BC and how was power articulated at such centres? As part of wider research on European ‘oppida’ and ‘mega-sites’ (Moore 2017a, b) this project has examined one of the least well-known of these complexes in Britain: Bagendon in Gloucestershire. It provides a major reappraisal of the complex’s role and chronological development, bringing together the results of previously unpublished excavations and a major new campaign of geophysical survey and excavation undertaken between 2008 and 2017. Alongside recent publication of the excavations at nearby Ditches ‘hillfort’ (Trow, James and Moore 2009), this project is allowing a major reassessment of the nature of the Iron Age-Roman transition in central-western England and enabling new insights on the nature of social centres in the Late Iron Age.

The project has included high-resolution magnetometry survey of c. 170ha, revealing numerous new archaeological features. Fieldwork also included excavation at newly identified Iron Age enclosures, a Roman villa, and conducted one of only three examinations of the Iron Age earthworks. Combined with analysis of the unpublished excavations conducted between 1979-1981, the project has provided major new insights into the nature, chronology and origins of the complex.  Collectively, the evidence is allowing the project to re-evaluate the Bagendon complex and resituate it within dialogues about the nature of Late Iron Age oppida in Britain (Moore 2012; 2014; 2020). It suggests that Bagendon, and perhaps other ‘oppida’, should be redefined as a ‘powerscape’: a landscape for the enactment of power, one which offers important insights into the changing nature of societies from the Middle Iron Age to Roman period. The results of the project have been published in a major monograph: A biography of power. 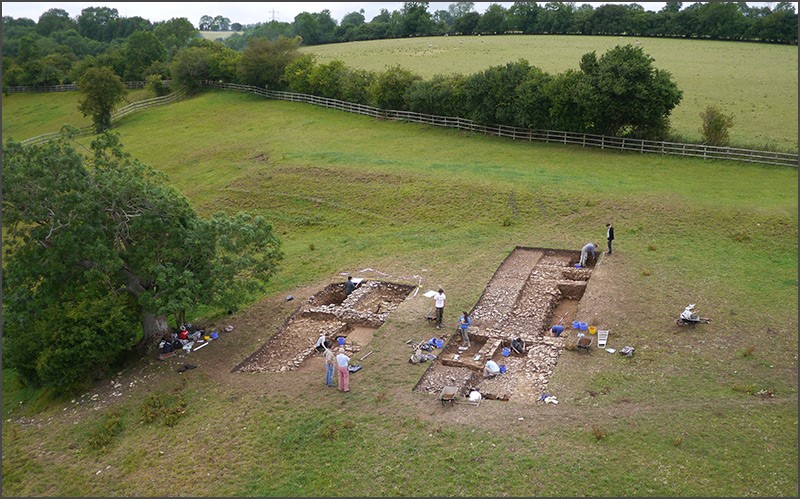 Image above: Aerial photograph of excavations in 2015 (taken by Mark Woolston-Houshold)