Computational Research on the Ancient Near East (CRANE)

More than 150 years of research on the ancient near east has created a vast array of complex and interrelated data ranging from settlement patterns to ceramics. However, it has been difficult to make full use of this research data to improve our understanding of how human communities in the region developed and interacted with the natural environment, because we lack an analytical framework that can integrate the full range of data produced by this uniquely rich cultural legacy.

CRANE’s goal is to provide a platform for data integration and analysis. Beginning with several archaeological sites in the Orontes Watershed of southeast Turkey and northwest Syria, CRANE is building an international collaboration of researchers who will use these data to model and visualize connections between social, economic and environmental factors at various spatial and temporal scales. The information is being integrated through the OCHRE software platform (University of Chicago). Researchers from around the world will be able to access comprehensive and rich datasets about the region in one location and share their work and ideas with each other.

CRANE is funded primarily by a grant from the Social Sciences and Humanities Research Council of Canada.

In Phase 1 of the project (2012-17) the Durham team focused upon ceramic research and the analysis of legacy data from the 1976-92 excavations at the key site of Tell Nebi Mend in upper Orontes in western Syria. This included the work on the stratigraphy of the 4th and 3rd millennium occupation, study of archaeobotanical data, analysis of the ceramics and obtaining a new sequence of radiocarbon dates spanning the Late Chalcolithic through to the Iron Age. The team also held a workshop in Durham that brought together ceramics specialists working on material from sites across western Syria and Lebanon.

- Establishing, through experiments, the firing characteristics of the most common fuel types available in the region

- Experiments to understand the impact of temperature and duration of firing on those combinations of clay and temper that are most common in the region, and how the former might affect the results obtained via the analytical techniques traditionally used for ceramic provenance research

Image below: This EB III vat from Tell Koubba in Lebanon was used in the production of liquid products such as olive oil; it shares the distinctive combed exterior surface with transport  jars 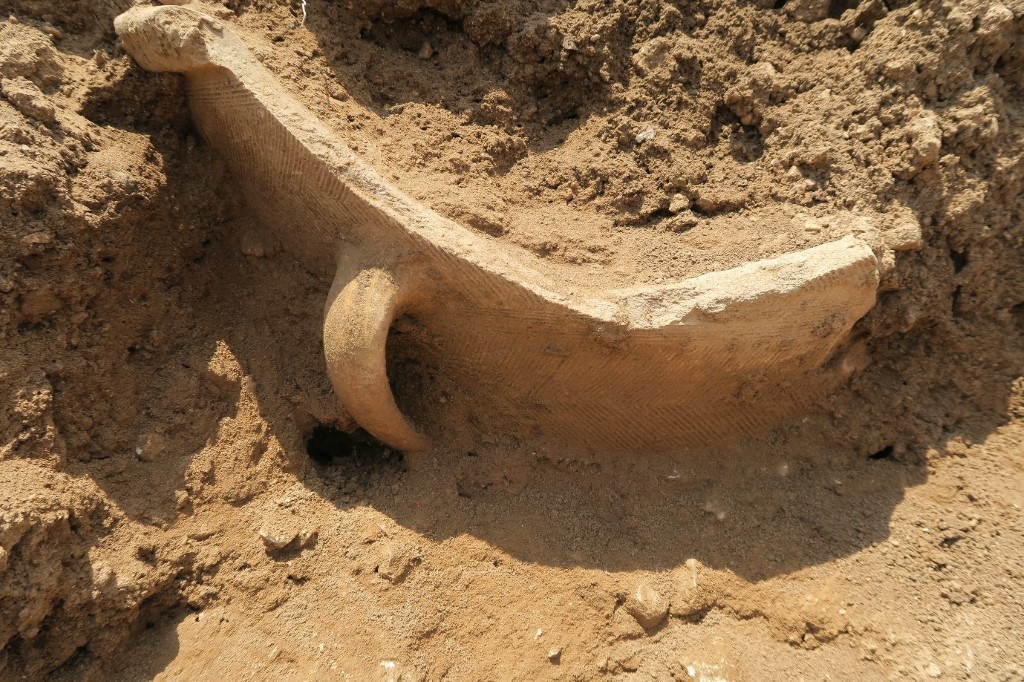 In addition, as part of the CRANE project's broader research goals related to the modelling of past climate and of possible social responses to climate change, CRANE is collaborating with Durham’s CLaSS project as part of the Middle Eastern regional group of the LandCover6k project.

LandCover6k is an initiative that aims to reconstruct past land cover and human land use at a global scale for discrete time slices, in order to examine the impact of anthropogenic land use on past climate systems and improve palaeoclimate modelling scenarios.