Endangered Archaeology in the Middle East and North Africa (EAMENA)

The EAMENA Project was established in 2015 and is a partnership between the Universities of Durham, Leicester and Oxford.  We use satellite imagery and ground survey to record and monitor cultural heritage sites in the MENA region in response to a growing number of threats such as agricultural expansion, urban development, conflict, and natural disasters.  The project sits at the interface between two of our Research & Impact Groups, namely Landscapes of Complex Society and the Heritage Partnerships.

The documentation of the archaeological record in MENA countries has been supported by grants from the Arcadia Fund. We have subsequently obtained grants from the Cultural Protection Fund of the British Council  to  support in-country training of local heritage officials in the methodology of the EAMENA project – in some cases as a preparatory step towards the creation of digital national heritage inventories.

Professor Graham Philip is the co-investigator of the project at Durham, and our main in-country partners are the State Board of Antiquities and Heritage (SBAH) of Iraq, the Directorate General of Antiquities (DGA) Lebanon and the O. Lordkipanidze Archaeological Research Centre, Georgian National Museum.

At Durham, our work has focused on documentation, capacity building and research in Lebanon, Syria, Iraq, and Iran. Working with the Cultural Protection Fund we have run successful training courses for our local partners in Lebanon and Iraq (2018 – 2019). These focused on satellite remote sensing, site documentation, and survey techniques for identifying and recording threats and damages to archaeological sites.

We are engaged in collaborations that seek to bring attention to the destruction of cultural heritage in conflict situations.  Working with colleagues from Rashid International and Yazda we published a report on the destruction of Cultural Heritage Sites, shrines in particular, in northern Iraq during the genocide perpetrated by Islamic State against the Yezidis. 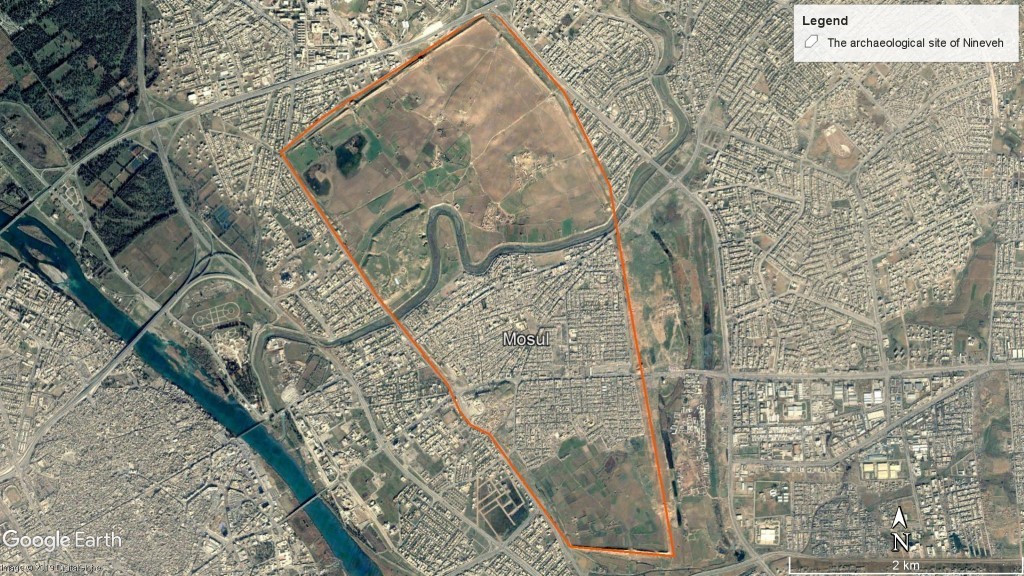 Image above: The Assyrian capital of Nineveh in northern Iraq; the site boundary is in orange. The North-West palace blown-up by Islamic State is at the top left corner. The suburbs of Mosul now cover a large extent of the lower town, illustrating the need for heritage to be taken into account when developments are being planned

Case-studies that utilise the EAMENA methodology have been developed by several of our former trainees and colleagues in the MENA region.   Aqeel Almansware (SBAH, Iraq) has been documenting threats such as flooding, looting and urban development and their impact on archaeological sites in ThiQar Province, in southern Iraq supported by a Global Heritage Fund Award.

Mouhamad Abdel Sater (DGA, Lebanon) was awarded a Nahrein Network grant to continue his research on site identification in the Beqaa Valley while a visiting researcher at Durham.

We have also been working with Syrian colleagues through the Council for at Risk Academics (Cara) Syria Programme to document damage to cultural heritage during the recent conflict.  A Durham University Global Challenges Research Fund QR Visiting Fellowship is enabling us to support Adnan Almohamad, a former Cara Syria fellow, in his research on threats to cultural heritage in North West Syria.

A Durham University International Engagement Grant was awarded to members of the project to travel to Tbilisi to establish a collaboration with the O. Lordkipanidze Archaeological Research Centre, Georgian National Museum for the digitisation of a major archive of historical aerial photographs.  The delivery of this project will be supported by Arcadia starting from summer 2020.

The EAMENA project also engages in public outreach efforts such as the production of the Our Culture Our Future exhibition.  Displayed in museums across the MENA region, this exhibition aims to raise awareness of local cultural heritage sites to safeguard them for the future. 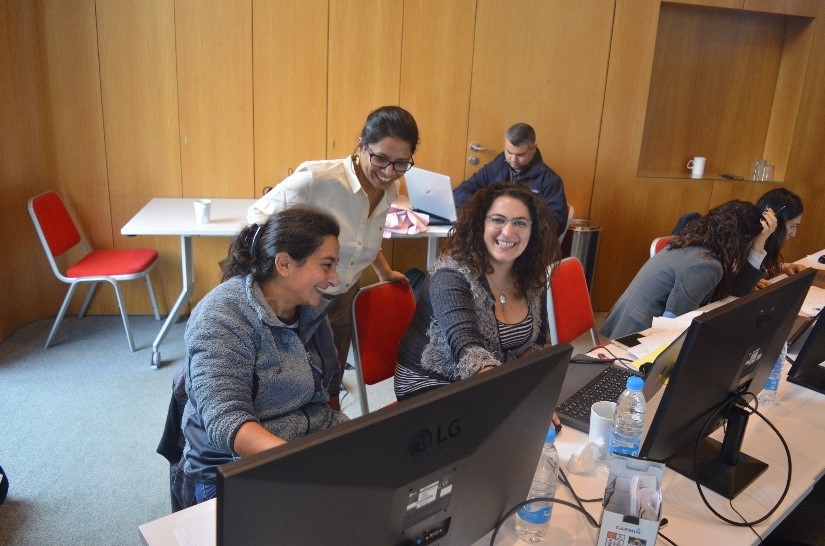 Image above: Dr Neogi our Training Manager at a workshop for DGA colleagues held in Beirut in 2019

Azadeh Vafadari: Assessment and Management of Damage of Archaeological Sites and Monuments and Identification and Prioritization of Responses in a Disaster (conflict) and Post-disaster (post-conflict) Context 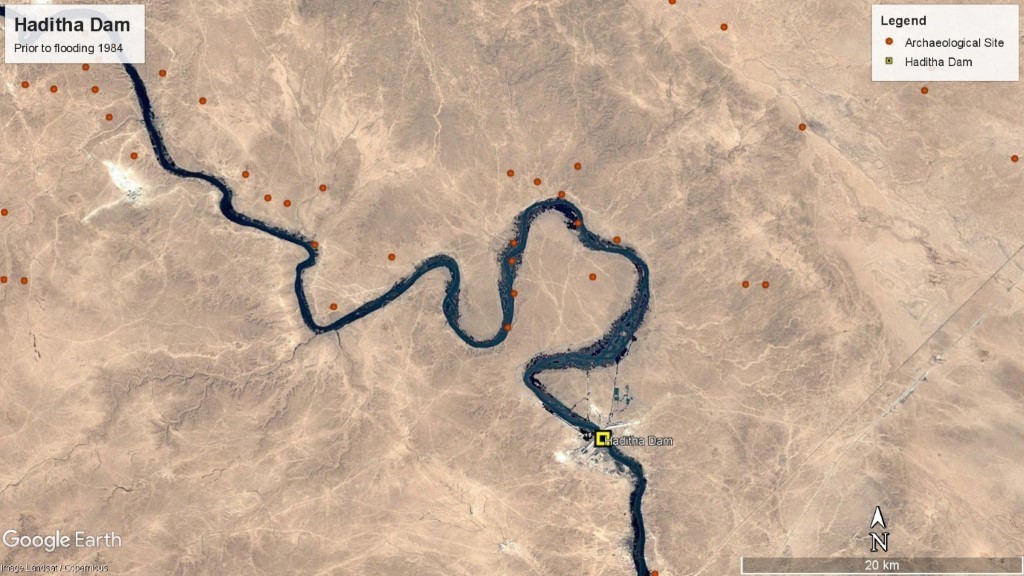 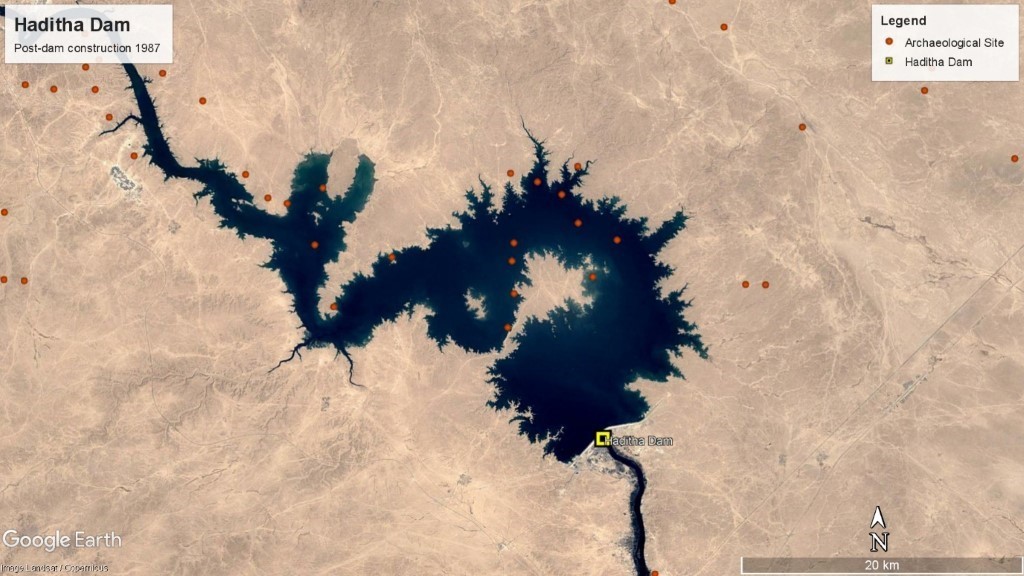 These before and after images above reveal archaeological sites along the Euphrates River in central Iraq, that were impacted by the creation of the Haditha dam which was built in the 1980s. The creation of a national inventory will mean that in future this kind of information will be available in digital format, in advance of major construction projects, thus allowing heritage concerns to be fed into planning decisions