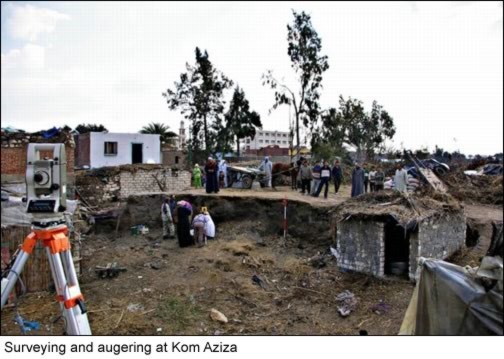 The Egyptian Nile Delta has many hundreds of archaeological sites, about which very little is known and, therefore, the development of the Nile Delta as an important element in ancient and modern Egyptian life and culture has been relatively little understood. After calls to focus on the threatened Nile delta sites by the Egyptian authorities, archaeologists began to turn their attention to the north of Egypt in the last fifty years. As part of the drive to obtain further information, the Delta Survey Project of the Egypt Exploration Society began to visit and document as many sites as possible and the North-West and North Delta Survey projects are part of this wider programme.

The NDSP has surveyed and visited over 100 sites in the north-west Nile Delta in order to obtain archaeological information about them. The surveys have mapped and studied pottery at the larger sites and drill augering has been carried out in the western Delta to locate the course of the abandoned Canopic Branch of the river, as well as in the area of Tell Mutubis to detect earlier channels of the Rashid branch of the Nile. The project was funded by the AHRC between 2002-2007 and is now supported by the Special Project of the British Academy administered by the Egypt Exploration Society and directed by Dr Penelope Wilson since 2017.

One of the early results of the project suggests that the foundation of Alexandria around 330 BC led to a boom in settlement development in the north-west Delta in order to service and supply the ‘Pearl of the Mediterranean’. Over time, however, the silting up of the Canopic Branch of the Nile led to a slow decline in settlement density and population in the western delta into the 8th century AD, whereas in the north of the Delta settlements were sustained by active river branches into the 11th century AD.

A further result has been in the understanding of the northernmost areas of the Nile Delta and their development during the Ptolemaic to Late Antique periods, (ca. 300BCE to 7th century AD). Many of the sites also have the potential for understanding cultural change from the end of the Pharaonic period, through the Roman, Late Antique (Coptic) and early Islamic periods. The area has great potential for the study of a millennium of political and religious change on a vast scale, seen from the perspective of regional centres and agricultural communities at the heart of Egypt’s grain and flax lands. As Egypt became embroiled within the wider East Mediterranean world, the role of the Delta in this wider system may be a key to understanding political and religious dynamics.

Mapping settlement patterns and including geoarchaeological work within the broader framework of the development of the Nile Delta is also part of the project and fits within the ‘Landscapes of Complex Society’ Research Group. The aims of understanding how the special environment has impacted upon and shaped human activity in the north have already led to identifying key moments in the natural history of the Delta, that may have given the opportunity for human exploitation to change with consequential impacts on administration, managerial control and state formation at specific moments in Egyptian history such as the late Predynastic Period or the Ptolemaic and Roman Empires, or the Islamic expansion in Egypt.

The project also established methods for the fast and cost-effective recording of information through a collaborative project with the University of Mansoura and Ministry of State for Antiquities. The aim of the training project was to enable the documentation, monitoring and investigation of sites far into the future. This part of the project was supported by an International Partnership Mobility Scheme Grant from 2014-2017 where work at the site of Tell Mutubis was carried out with support from the Amelia Projects of the Egypt Exploration Society.

Through the support of the Delta Survey Project of the British Academy and the Egypt Exploration Society, the work in the Delta can be expanded with further collaborations with Egyptian and other colleagues. By identifying gaps in our survey and archaeological coverage, it is hoped to expand into areas not yet surveyed such as the Sebennytic Basin and the central Delta core. In order to work effectively, we are also developing predictive models for settlement identification based on remote sensing data and historical cartography.