Religious orders on the frontier:

monks on the edge of Christian Europe in Spain

Funding for different aspects of this project was provided by the Leverhulme Trust, University of Durham, University of Winchester and the NIKER project (EU FP7 Environment Directorate).

This project page draws together information on two long-running projects in Spain conducted along the Huecha Valley (Zaragoza, Aragon). The Moncayo Archaeological Survey is investigating population, economic and environmental change from early prehistory to the present day to the north-west of Zaragoza in Spain. This interdisciplinary project combines landscape archaeology with earth science methodologies and approaches. Developing from this field survey there have been several excavation campaigns. Broadly, these examine the post-Roman landscape and particularly establishment and impact of the religious orders after the Christian reconquest of NE Spain in the early 12th century, adopting an archaeological perspective to place monastic achievements into a wider landscape context. Through our excavations, documentary analysis, standing building survey and topographical recording of monasteries, residences, granaries and watermills we are investigating themes such as settlement form in a multi-faith society and the transformation of irrigation systems, crops, woodlands and fields on the frontier. This contributes to wider European debates explored in the 2011 Medieval Archaeology article (see below).

The Moncayo Archaeological Survey began in 2000, under the direction of Chris Gerrard, and is investigating population, economic and environmental change to the north-west of Zaragoza in Spain. The area selected for study comprises a NE-SW transect of 33 km, stretching from the River Ebro in the north to the foothills of the Sierra de Moncayo in the south. The topographic units here consist of the floodplains, channels and terraces of the Ebro and its south bank tributary, the Huecha, as well as the mountainous terrain of the Sierra de Moncayo which rises to 2313 metres. Borja and Tarazona are the local market centres.

This is an interdisciplinary project with contributions from Keith Wilkinson (University of Winchester) and Isidro Aguilera (Museo de Zaragoza) which combines landscape archaeology with earth science methodologies and approaches. A paper about our methodology has been published in Salduie: Estudios de prehistoria y arqueología 10. The basis for our reconstruction of landscape change is topographical maps, aerial photographs, CORONA satellite imagery and walk-over survey including the correlation of sub-surface deposits, the recovery of artefacts and 14C and luminescence dating. Early results suggest two episodes of significant landscape change which have identified from the geomorphological record dating to the Neolithic/Bronze Age and post-medieval period. These episodes are interpreted here as the result of human land-use change: that in the prehistoric period from clearance of woodland in the Neolithic and the subsequent expansion of agriculture in the Bronze Age, and that in the 19th century from the removal of upland woodland following changes in land ownership and management. Evidence for erosion and deposition was not found for either the Roman or medieval periods when archaeological and historical evidence indicate that local population was at its highest and agriculture most intense, nor from the height of the Little Ice Age when climate is thought to have been at its most extreme. Our preliminary results were made available in our 2005 article in the Journal of Mediterranean Archaeology 18(1).

Early results underline the importance of irrigation on the gravel terraces of the Ebro and the Huecha; the central Ebro basin is the most arid inland region of Europe. In the simplest terms, the story of local irrigation is the history of transporting water in gravity-flow canals from west to east, bridging climatic and topographical transitions between a higher terrain where water is more plentiful and a lower one where water is scarce, unreliable and drought threatens. Understanding the capture, storage and distribution of water is therefore fundamental and our attention has also moved towards developing methods to date these hydraulic systems as part of a Leverhulme Trust-funded project in collaboration with Ian Bailiff. For two articles about our studies of historic irrigation technology see Quaternary Geochronology 30(B) and Water History 3(1) for 2015 and 2011 respectively.

We have also begun to document phases of medieval settlement through excavation, such as that carried out in 2017 in Bureta, Zaragoza. Here an intriguing site, the subject of a forthcoming publication, revealed a vast building with plaster floors, robbed out walls and remains of feasting during the Visigothic period (6th-7th centuries).

At nearby Ambel, we have studied and published a long-term study of the archaeology, architecture and history of the Templar, and later Hospitaller, preceptory there. This research is summarised in Gerrard (2003) Paisaje y señorío. This early work led on to several articles exploring different aspects of life in the Military Orders. These include a major study of religious relics and the Military Orders in 2017 for Speculum 92(4), a chapter about graffiti in 2008 The Military Orders. Volume 4. On Land and by Sea, and several others about rammed earth buildings including a 2017 article for International Journal of Architectural Heritage 11(5) with German colleagues working on the NIKER project.

At Bulbuente, another village closeby, an abbot’s palace still survives and is undergoing restoration. Today the complex comprises a re-used and enlarged Roman stone tower with an adjoining rammed earth and brick-built palace of the 14th-16th centuries. Excavations in the summers of 2013, 2014 and 2017, together with the recording of the standing buildings and tracing of graffiti, have documented a complex history, including the destruction of the site during the war of the two Peters between Castile and Aragon (1356-1375), and kilns for the production of glazed wall/floor tiles used at the nearby Cistercian monastery of Veruela in the 16th century. Relatively few monastic manor houses like Bulbuente have been excavated across Europe but they were important judicial and administrative centres and served not only as stopping off points during tours of inspection for the abbot and his retinue but also as an occasional escape from the confines of the monastic precinct.

Finally, excavations at the Islamic settlement of La Mora Encantada, just outside the present day village of Bulbuente, have provided vital clues to understand the settlement pattern in the area prior to the Christian reconquest in the early 12th century. Domestic contexts containing local pottery and silos for grain storage of the 11th century were excavated and botanical samples recovered and studied containing seeds have been studied by Ed Treasure. This is the first medieval archaeobotanical study to be conducted in the area and one of a series of applications of environmental archaeology to Spanish datasets, including the 2015 and 2019 collaborations with Michelle Alexander (University of York) listed below. 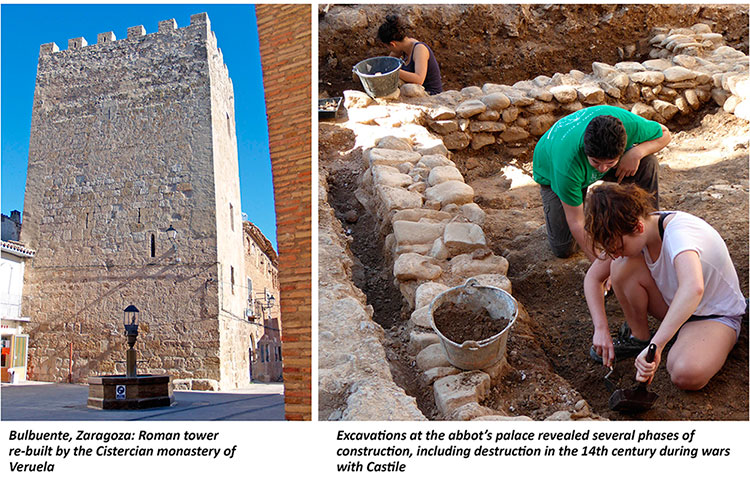