Dynamics and Power in the West Nile Delta

Saïs was the capital city of Egypt in the 26th Dynasty, from 664-525 BC, a period of increasing trade with the Aegean and Eastern Mediterranean, as well as of religious, social and economic change within Egypt itself. Although largely destroyed, the site of the city had been explored very little until this project began in 1997. The main aim was to understand the development of this royal city in its geographical, historical and social contexts. The project combines regional survey work, targeted excavation and various types of surveys at Saïs (near the modern town of Sa el Hagar) to investigate the reasons for settlement development, growth and abandonment from the Neolithic to the Late Antique period in the north-west of Egypt. The project is was funded by the AHRC from 2002 to 2007 and then by small grants administered through the Egypt Exploration Society and Durham University from the British Academy and Wainwright Fund, amongst others.

The results of the project include the discovery at Saïs of an Early Neolithic fish midden site, a Middle-Late Neolithic settlement, Buto-Maadi Period settlement, a Ramesside town house, a First millennium BC town; a Saite sacred zone and buried buildings. In addition, the later Ptolemaic and Roman dismantling and destruction of the city is attested through pottery dumps and discarded stone fragments. A Late Antique church and the modern development of the city ensures that the site biography covers over 6000 years of human life in Sais to the modern day. A storage facility at Sa el Hagar is also used to disseminate results of the project and about the site to local people, visitors, tourists and students. As results are published in a series of monographs, the key themes of the site are: regional control; river-power; external and internal connectivity and the impact on individuals within a state system; recycling and destruction as part of the fabric of Egyptian urban centres. Current work, undertaken as a collaborative project with the Ministry of Tourism and Antiquities in Egypt, is focussed upon the town site of the First Millennium and the way in which the provincial town became a royal city by the seventh century BC, as well as the links between Sais and her daughter ‘emporium’ at Naukratis, to the west.

Work in the project supports the Research Groups: Landscapes of Complex Society and Material and Visual Culture. 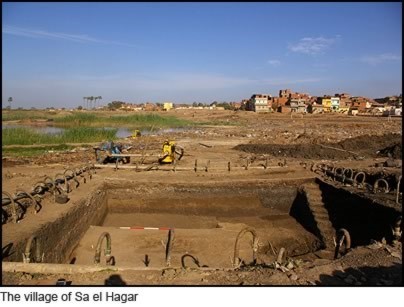