A long way from home:

the Scottish Soldiers of 1650 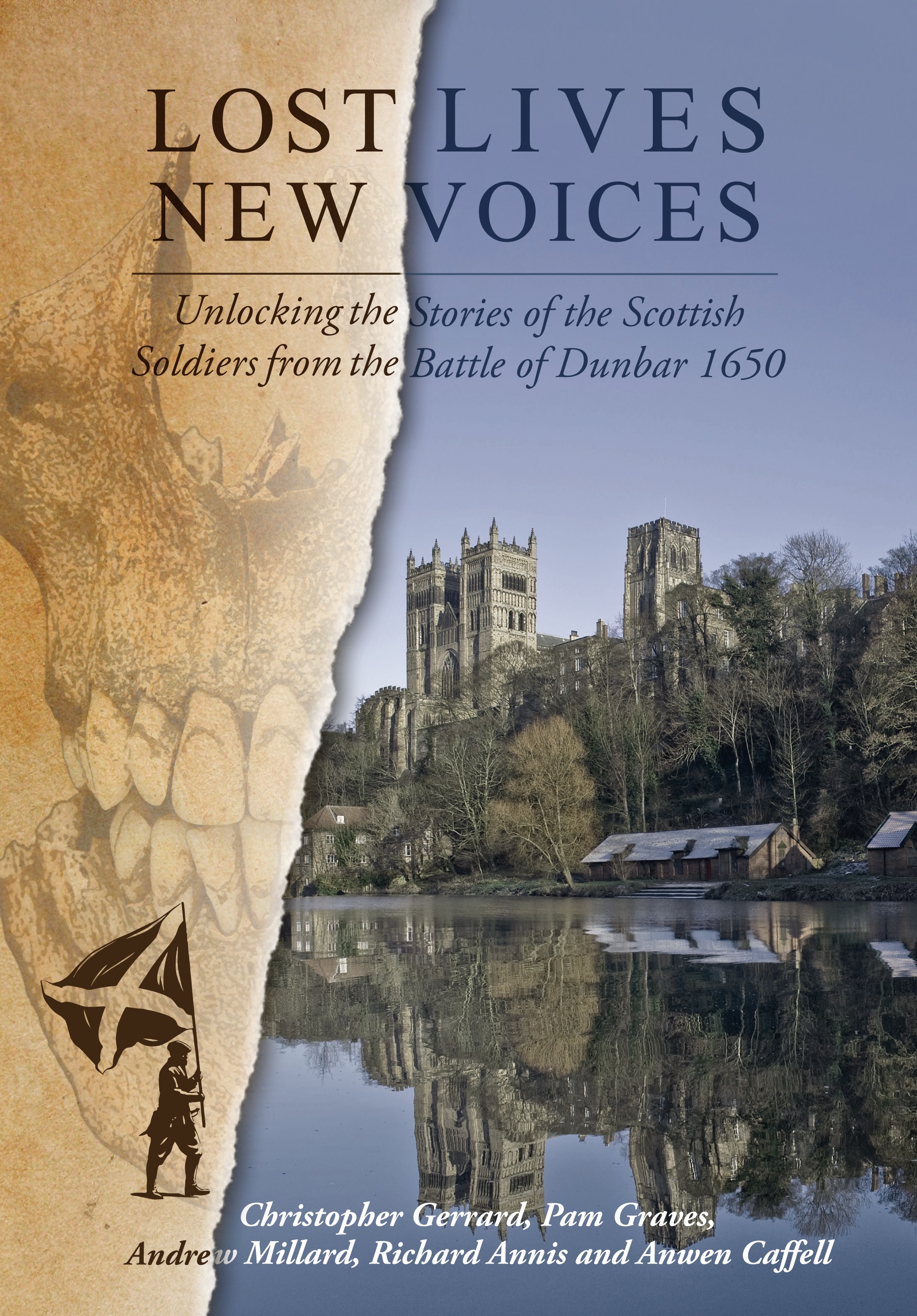 On a wet Thursday afternoon in late November 2013, archaeologists observing construction works at Palace Green Library made an unexpected discovery. Disordered tumbles of articulated skeletons were identified in two mass graves. Fortunately, the historical importance of the location, at the heart of the UNESCO World Heritage Site, had required the presence of a professional archaeologist while the groundworks were underway. Construction was immediately halted while the bones were carefully cleaned and lifted.

Over the next two years, a complex jigsaw of evidence was pieced together by a team of researchers from the Department of Archaeology at Durham University in order to establish the identity of the human remains (Chris Gerrard, Richard Annis, Andrew Millard, Pam Graves and Anwen Caffell). Could these have been the bodies of medieval monks or victims of an outbreak of plague or casualties of war? Using the latest techniques of archaeological science it has been possible to reconstruct how and why this group of men vanished off the historical radar.

The manner of their burial provided the first clue to their identity. Christian graves, whether for monks or ordinary people living in the city of Durham, would have been individual burials, carefully laid out on an east-west alignment. These men looked as if they had been buried with little ceremony. Further study of the skeletons then revealed that they were all male with the majority being under 25 years of age. If these had been plague victims, the young and the old, women and children would also have been infected. As for their possible date, two of the men had tell-tale crescents of wear on their teeth caused by the habitual smoking of a tobacco pipe – a habit which only became popular in the early 17th century. Radiocarbon dating then confirmed a date between 1630 and 1650.

Further isotopic analysis indicated that the individuals had different origins – some came from Scotland, some were from Scotland or northern England and three came from outside Britain, most likely from Scandinavia, the Baltic or the Alps. There were signs of poor health in their teeth and bones indicative of poor nutrition and stress during childhood, including scurvy and rickets. All this is consistent with their identification as Scottish soldiers, mostly born 1624-33 into periods of famine and disease and then brought to Durham as prisoners after the battle of Dunbar in September 1650. This battle was fought between a Scottish Covenanting army and English Parliamentarian forces which had crossed the border into Scotland in July 1650 to pre-empt a Scottish invasion. Although the Scots had only recently fought alongside the Parliamentarians, by this time allies had become enemies and the Scottish Covenanters now sided with the future Charles II.

The English army was heavily outnumbered at Dunbar but the Scottish troops were mainly freshly recruited young men with little experience of soldiering. This helps explain the age profile of the human remains as well as the presence of others who originated outside Britain; they may have been mercenaries from continental Europe. The English army on the other hand, led by Oliver Cromwell, were highly experienced and won a resounding victory on the battlefield in little over an hour. Unusually large numbers of prisoners were taken, and while Cromwell freed over 5000 of the old, the young and the wounded, about 3900 of the fittest were soon marched south towards Durham.

The march itself was traumatic – the Scots were denied food and shelter and some were executed for refusing to continue while others escaped. As they were escorted through Berwick, Alnwick, Morpeth and Newcastle, the men continued to fall sick with the dysentery which had affected both armies before the battle. When they finally reached Durham, eight days later, they were imprisoned in the empty Cathedral which was unused at this time. Conditions inside did not improve. The prisoners, already malnourished and dehydrated, were cramped and cold. The situation quickly slipped out of control. Contagious disease spread quickly, the sick were isolated in the Castle where their conditions were better, but by the end of October only about 1,400 of the original 3000-3500 who had entered the cathedral remained alive. These deaths from dysentery are entirely consistent with the results of the skeletal analysis; there was little convincing evidence of battle wounds.

There is, however, more to the Dunbar story. Some survivors were released to work in local industries such as the saltpans at North Shields and the coal mines. About 500 were sailed down to King’s Lynn to work on drainage schemes on the Cambridgeshire Fens. Another 500 men sailed for France though we do not know what became of them. Those who we know most about were transported to New England to work as indentured servants for 5-7 years, usually in saw mills (in what is now Maine) and iron works at Saugus and Braintree (New Quincy) near Boston (Massachusetts). There are descendants of Scottish soldiers still living in New England to this day and other families spread across the US.

A new book, “Lost Lives, New Voices: Unlocking the Stories of the Scottish Soldiers at the Battle of Dunbar 1650”, provides much more detail about the discovery, the scientific investigation, the historical background and the lives of those who survived imprisonment in Durham. It won the Best Archaeology Book of the Year Award in 2018 and now forms the core of a free online course which has attracted more than 5000 learners

The project also featured widely in the media with popular accounts in Current Archaeology, History Today, British Archaeology, American Spirit and Archaeology as well as the Channel 5 documentary series Britain’s Greatest Cathedrals and Dan Snow’s History Hits podcast. Contacts with creative artists included specially written music by folk duo Brothers Gillespie, a co-produced and written (Cap-a-Pie and Laura Lindow) theatre production, Woven Bones, which played to 11 venues in north-east England and Scotland, telling the story of the battle and its aftermath, and The Scottish Soldiers, the Ouse Washes; the Origins of Landscape Change in the Fens (Origins), a co-produced community arts project on the Fens developed by The Word Garden with HLF sponsorship. The story also featured in the US TV Who Do You Think You Are? and in 2018 a major exhibition took place in Durham attracted more than 30,000 visitors from 30 countries; a spin-off travelling exhibition about the soldiers has since toured the UK and US. The project was shortlisted for a Times Higher award in 2017 and the Durham exhibition won a Living North award in 2019. 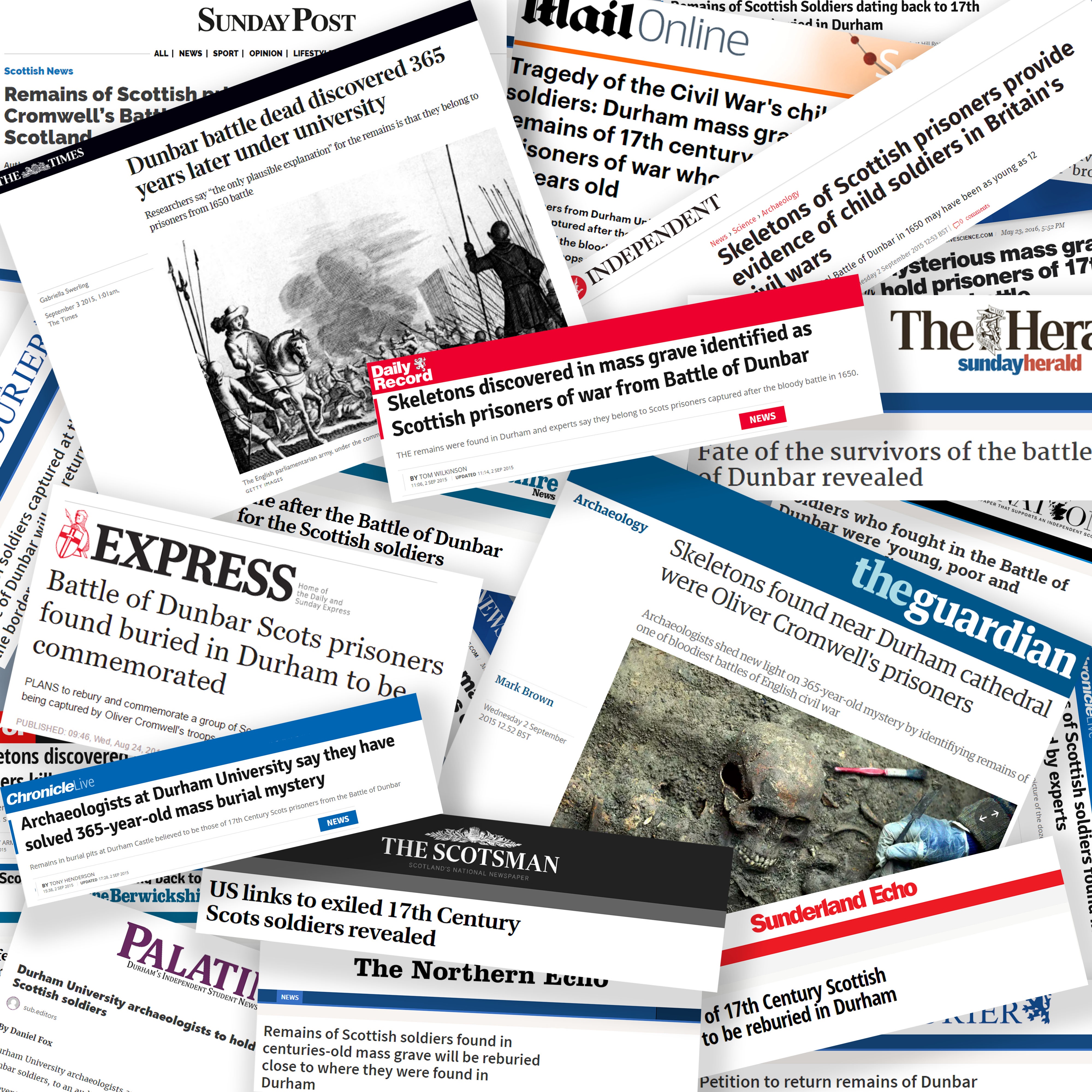