The Uig Landscape Project is funded by Historic Environment Scotland and reports on a large-scale landscape project in Lewis, undertaken by Edinburgh University between 1995 and 1998. Professor Mike Church is now co-ordinating the publication of the site excavated. Uig and the interior of Lewis is mostly covered by blanket bog and represents a landscape rarely analysed archaeologically in Atlantic Scotland and the wider North Atlantic.

The initial survey identified 344 sites in the Uig landscape and of these four were chosen for targeted excavation. Three of the sites were selected as representative of monument classes rarely excavated in North Atlantic archaeology. These sites are Gob Eirer, a Late Bronze Age promontory enclosure; An Dunan, an Iron Age tidal islet comprising a causeway, an elaborate central hearth and evidence of later Norse re-use; and Guinnerso, a relict transhumance landscape, containing a 5.5m Holocene lake sequence, Bronze Age remains and a complex sequence of remarkably well-preserved sequence of Iron Age to Medieval shielings. The fourth site is an abandoned blackhouse in the buaile of Bereiro. An additional site (Aird Calanais) was excavated in the wider Calanais landscape in 1998, reported in Proceedings of the Prehistoric Society in 2019. 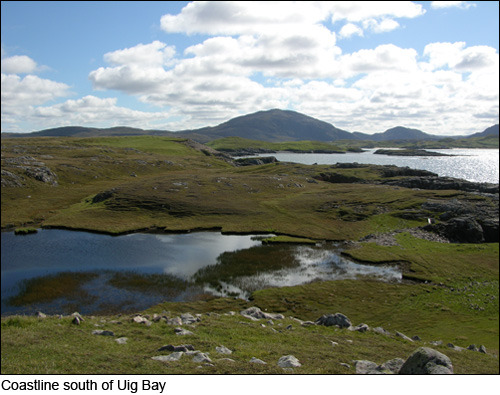