The Bioarchaeology of Cardiovascular Disease

Cardiovascular disease (CVD) is the number one cause of death in the modern world, with more people dying annually from CVDs than from any other cause. An estimated 17.9 million people died from CVDs in 2016, representing 31% of all global deaths. Of these deaths, 85% are due to heart attack and stroke. Behavioural risk factors include tobacco use, an unhealthy diet and obesity, physical inactivity and the harmful use of alcohol using population-wide strategies.

Even though CVDs represent a hallmark feature of the second epidemiological transition, occurring in most parts of the world during the 20th century, palaeopathological research on human remains is increasingly revealing evidence that CVDs have plagued humankind for a long time. These findings not only offer new information about disease in the past, but also allow for new insights into the evolution and aetiology of CVDs through contextualized bioarchaeological studies and biomolecular approaches. Nevertheless, evidence for CVDs in archaeological human remains is still scarce. This is particularly true for skeletal remains, linked to factors such as inadequate recovery strategies during excavation and lack of recognizing the evidence, such as calcifications resulting from atherosclerosis. With new evidence emerging in recent years, it was felt timely to bring together expertise in palaeopathology, forensic anthropology, biomolecular archaeology and evolutionary medicine to discuss current knowledge of CVDs in past human populations, including new research perspectives, recovery strategies, the impact of taphonomy on finding evidence, and highlighting the modern relevance of the insights gained from the data. Additionally, recent results from burials containing skeletal remains show the potential for preservation of evidence with the usual “materials” (skeletons as opposed to mummies) that bioarchaeologists study.

The literature on the genetics, evolution, and variation in CVD has also grown substantially, as has a realization that experiences in early life can impact health in later life, such as CVD. Significant strides have also been made by clinicians and medical anthropologists in understanding CVD and its impact on health in both westernized and non-westernised societies. As the world’s population ages and CVD becomes an increasing health problem in both developed and developing countries, many studies suggest how CVD can be avoided. Bioarchaeologists have also become interested in this study area, even though detecting CVD in skeletal remains from archaeological sites has been very challenging indeed. Nevertheless, it has been in research focused on preserved human bodies that has provided the majority of the information we currently have on CVD in the past, alongside being described in historical documents.

CVDs are now no longer regarded as “diseases of civilization” or a modern phenomenon. With new methods, particularly improvements in the CT scanning of preserved bodies, such as mummies, and a better appreciation of the how CVDs can be detected in skeletal remains, a new picture of their past prevalence is emerging. Despite this, the available literature is rather disparate and tends to concentrate on the most common finding, that is: atherosclerosis, as seen in the form of calcified plaque in the walls of arteries of preserved bodies. However, because of the emerging interest in this condition in bioarchaeology we thought that the time was right for such a proposed volume.

The idea originated following a poster symposium at the Annual 2015 Meeting of the American Association of Physical Anthropologists in St Louis, Missouri (The Bioarchaeology of Cardiovascular Disease), organized by Michaela Binder & Charlotte Roberts.

This volume is nearing completion and will be published by Cambridge University Press. It will lead to increasing awareness of the possibility and research potential of detecting evidence for CVDs in archaeological human remains within the bioarchaeological community, a step ultimately crucial in order to expand the dataset and allow for wider insights into the epidemiology, history, and evolution of CVDs in the past. It will set the agenda for future studies because it not only considers the evidence, but also outlines why such evidence is lacking and how excavators might improve evidence recovery, especially when human remains are skeletons. 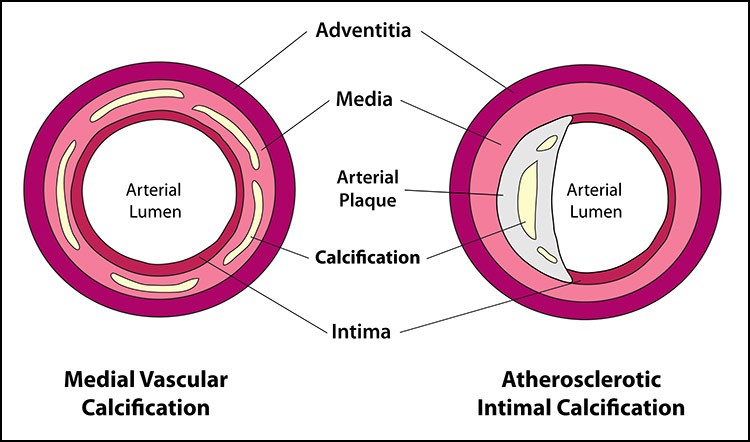 Image Above: Types of arterial calcification, or ‘how arteries get blocked in cardiovascular disease’ (Trustees of the British Museum) 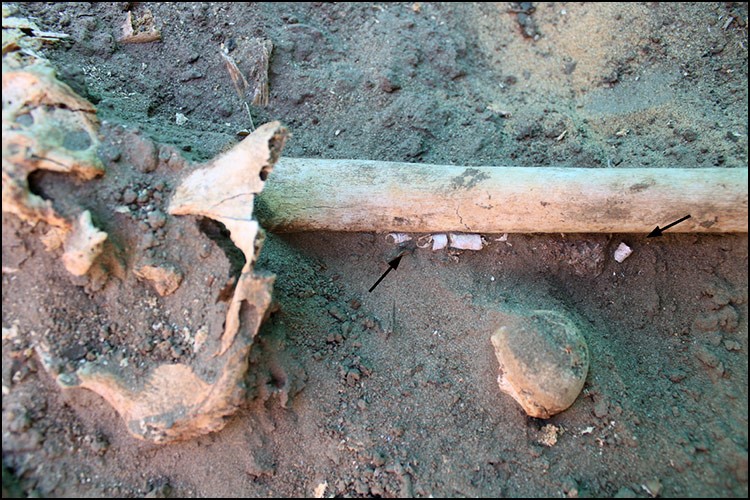 Image above: Part of a female adult skeleton buried at the site of Amara West, Sudan (1300-800 BC). Note the arrow pointing to calcifications of the femoral artery next to this person’s femur/thigh bone, indicating she probably had cardiovascular disease (from Binder and Roberts 2014; Trustees of the British Museum)