Abundant, easy to identify, date and quantify, ceramics are one of the more ubiquitous types of finds on archaeological sites from the Neolithic period onwards. The Archaeology Department at Durham hosts a cluster of researchers working on ceramics using a broad range of approaches. Our interests stretch across almost all periods, and cover large parts of Europe, Africa and Asia. We are also keen to encourage student research on ceramics at undergraduate to graduate levels. 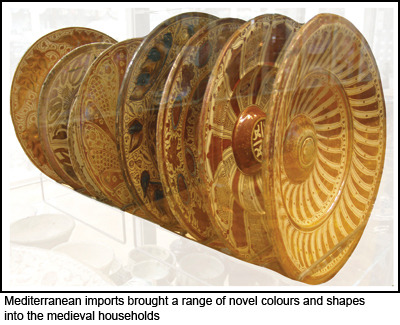 Derek Kennet works on the Sasanian and Islamic ceramics (3rd to 20th centuries) of the Gulf, Arabia, India and the western Indian Ocean. The aim of a part of his work over the past 12 years has been to establish methods and classification systems that can be shared between various scholars working in the area to make comparisons between sites and regions easier and more reliable.

Anna Leone works with Roman pottery that circulated in the Mediterranean, especially Italy and North Africa, from the Republican period to the 7th/8th century AD, considering themes such as economy, trade, consumption and problems of chronology.

Graham Philip studies ceramics from the later prehistoric and Bronze Ages of Syria-Palestine. Current projects include analysis of 4th millennium BC pottery from Tell esh-Shuna in the North Jordan Valley, and a major study of the changing ceramic styles, technology, raw material use and provenance in the upper Orontes Valley region of Syria from the Neolithic to the end of the Bronze Age. The latter forms part of the international CRANE project.

Sarah Semple studies the archaeology of early medieval Britain and is especially interested in contacts and connections with the continent during the 5th-11th centuries. She is not a ceramics specialist, but she has a keen interest in developing applied and experimental research projects using northern collections and in encouraging student projects centred on production techniques and usage.

Penny Wilson works in Egypt where ceramic material forms the largest part of the archaeological record (not pyramids!). From Prehistory to the Islamic medieval period, ceramics form one of the main means of dating, studying trading links within Egypt and around the Eastern Mediterranean and also contribute to investigations of cultural changes such as dining habits and foodways. There is a vast range of ceramic material on Egypt from mummy pots to elephant spouted bowls (see photo below), via egg-shell fine pre-dynastic and Nubian fabrics and wine amphorae to suit every taste! Wilson’s specialist interest is in the Late Period with interesting links between Aegean and Egyptian types.

Kamal Badreshany specializes in the quantitative analysis and geological characterization of ancient ceramics using archaeometric techniques, including ceramic petrography, scanning electron microscopy, X-ray fluorescence’s, and X-ray diffraction. His research focuses on the production and distribution of pre-Roman ceramics from the Levant and aims to understand better the social and economic changes that accompanied the development of the first urban landscapes in that area. Kamal runs the Durham Archaeomaterials Research Centre (DARC laboratory).

During the medieval and later periods, imports of pottery from all across Europe arrive in the British Isles at different times, in varying quantities and from different areas and sources. Alejandra Gutiérrez studies these types of imported ceramics as a means to reach and interpret the past, exploring themes such as trade and exchange, consumption, and meaning, as well as investigating the links between pottery, society, religion and the identity of the medieval household. She also works with material originating in the UK, especially from the South West and the areas of Somerset and Bristol. 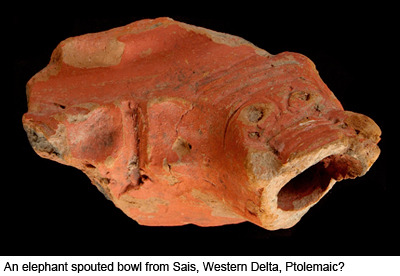 Dr James Bennett worked on ceramics from excavations at Sais (Egypt); he is interested in ceramics of the 1st millennium BC in Egypt.

Dr Ran Zhang has completed a PhD on the Chinese ceramics found in the Indian Ocean between the 9th and 18th centuries. He is currently working with material from the Williamson Collection from Iran, Pattanam and Sanjan materials from India, Mantai material from Sri Lanka, al-Ain material from UAE and Chinese ceramics in the Suakin material from Sudan. He is trying to identify the original kilns that produced these ceramics, based on an intensive archaeological study of 240 Chinese kiln sites and 125 archaeological sites in the western Indian Ocean. This project is the background to investigate the historical and economic context of ancient China and its influence in trade the Indian Ocean. Ran is now a Post-doctoral Research Associate in the Department of Archaeology.