Evolving spaces: coastal landscapes of the Neolithic in the European Land’s Ends 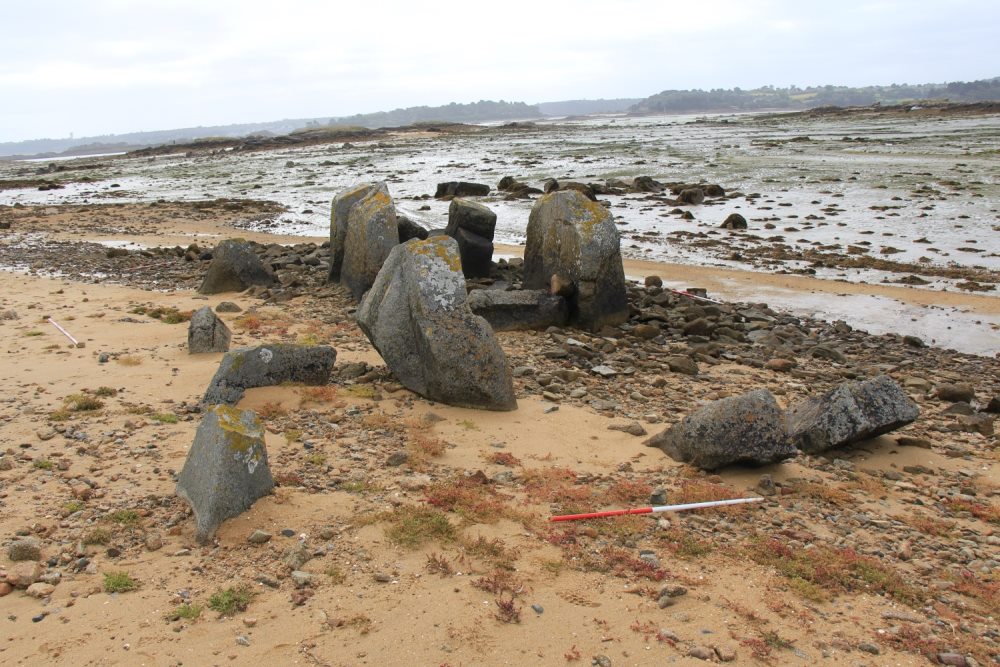 Image above: The Neolithic gallery grave of Coalen (Brittany, France) 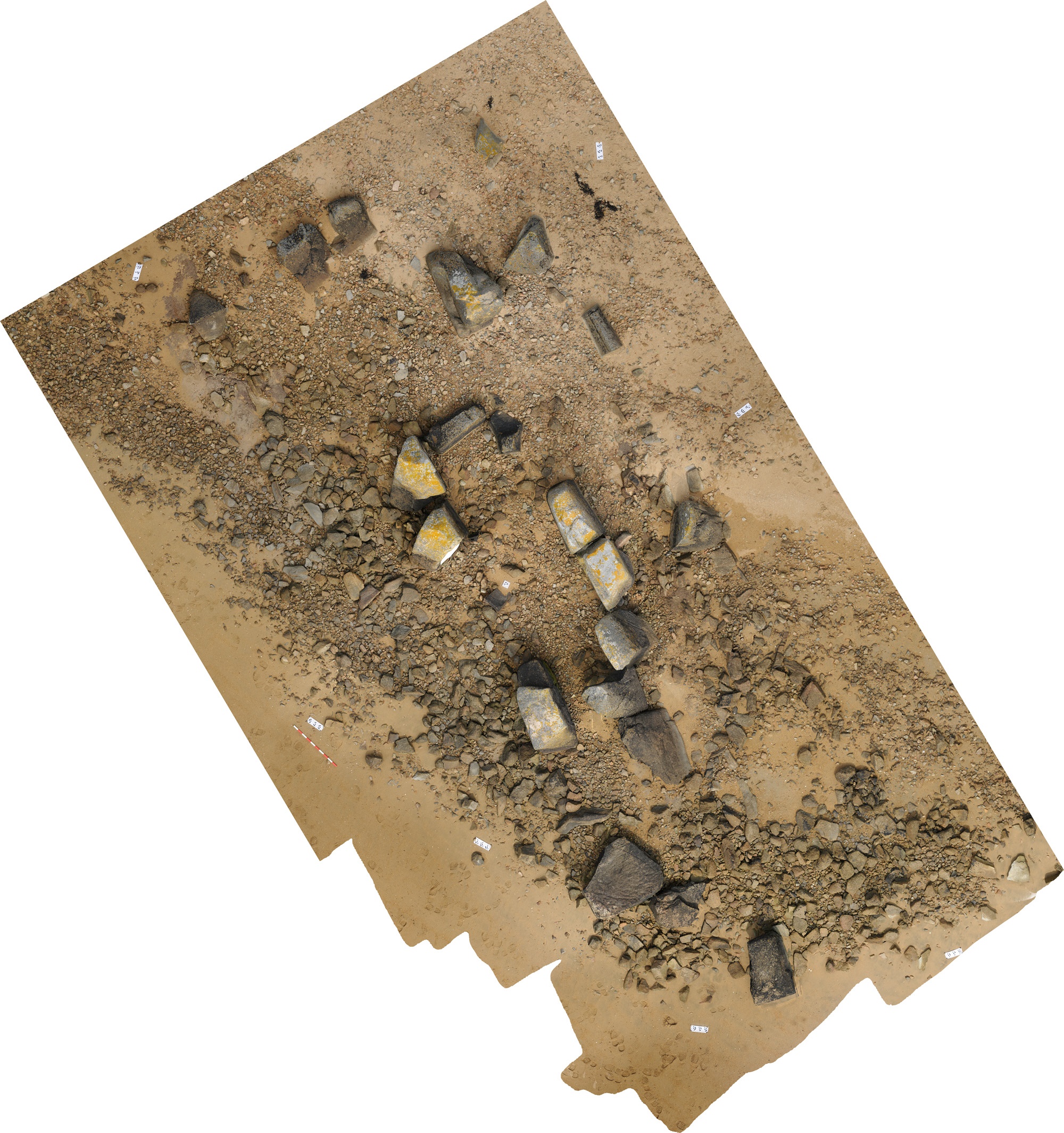 Image above: Orthophography of the Neolithic gallery grave of Coalen (Brittany, France)

Coastal areas have been poles of population ttraction since early prehistory. At present, sea-level rise is one visible effect of climate change, and human activity is also threatening much coastal and island territory on a global scale. In this context, the vulnerability of coastal heritage is increasingly coming into focus, particularly in areas like the European Atlantic façade where the combined results of sea-level rise, coastal environment dynamics and human activity are significantly altering the coastline.

The project, initiated in May 2013 and running until April 2015, used close-range photogrammetric techniques as a cost-effective solution to record, model and monitor both minor and major changes in the structural remains of selected case studies in a number of areas of the European Atlantic façade.

A second and third campaign of recording were undertaken at the same sites in March and September 2014 to provide a snapshot of the changes in operation over a 6- and 12-month timescale. Topographic reference points, combined with a series of control point measurements allowed the Digital Surface Models for each site to be accurately compared.

Further research in 2014 applied this approach to archaeological sites on the Scilly archipelago in south-west Britain, with a focus on Halangy Porth (Saint Mary’s; López-Romero et al. 2016).

By completing these tasks, the project accomplished several achievements that are of wider relevance for the European Research Area:

The seminar “Current trends in coastal heritage vulnerability and resilience on the European Atlantic façade” (3rd June 2014, Durham University) and the EAA session “Engaging the public with archaeology threatened by climate change” (EAA Annual Meeting, Glasgow, 2015) were relevant milestones in this context. This EAA session not only confirmed the success of these collaborations but also showed how important engaging with the public was to the objectives of the project. The session was the starting point for the publication of a more specific edited monograph on archaeology and public engagement (Dawson, Nimura, López-Romero & Daire, eds. Public Archaeology and Climate Change 2017).

In connection with this, eSCOPES also implemented an original initiative called “Guidoiro Dixital”. This initiative aimed to recover private photographic and video archives for one of the study regions (Galicia), to integrate them into the analysis, to engage in a dialogue with local communities and to provide them regularly with information on the advances and results of the project. A series of tools were created to achieve these objectives:

Five years after the end of the project, the Facebook page and the blog and information website remain active, having become a forum for information and news on coastal archaeological research and management.

Additional information on the project and its results are available at the official CORDIS (EU research results) webpage.

In addition to the aforementioned “Guidoiro Dixital” initiative, a series of press releases, magazine articles and radio interviews were planned during and after the duration of the project. These included a short TV documentary on one of the regional case studies for the Spanish National TV.

Together, these public outreach activities have given extraordinary visibility to the project and have contributed to a better awareness of the relevance of coastal archaeological research and of the consequences of coastal heritage loss at the national and European levels.

In the course of this project and in connexion with it, Dr López-Romero was awarded one of the 2013-2014 research Small Grants by the Institute of Hazard, Risk and Resilience at Durham University. This allowed – among other activities – for the organisation of the aforementioned seminar “Current trends on coastal archaeology vulnerability and resilience” (Durham, 3rd June 2014).

After leaving Durham, and building upon this EU-funded research project, Dr López-Romero has continued his research on coastal and prehistoric landscapes of the European Atlantic façade as well as his research collaboration with members of the Department of Archaeology. For example, he has continued to participate in the Neolithic Monumentality in Iberia project led by Prof. Chris Scarre and in the recent publication on the excavations at the Anta da Lajinha (Scarre & Oosterbeek, eds. 2020).

The research initiated by the eSCOPES project was crucial to Dr López-Romero being awarded a three-year International Junior Chair at the Bordeaux Archaeological Sciences Cluster of Excellence (LabEx LaScArBx) in France in 2017, where he developed the project “The memory of place: meaning, evolution and re-signification of space in the Neolithic of Western Europe” (January 2017-November 2019).

In December 2019, he was appointed Associate Professor in the Department of Prehistory, Archaeology and Ancient History at Universidad Complutense in Madrid, one of the Top 100 universities in Archaeology (QS World University Rankings for Archaeology). 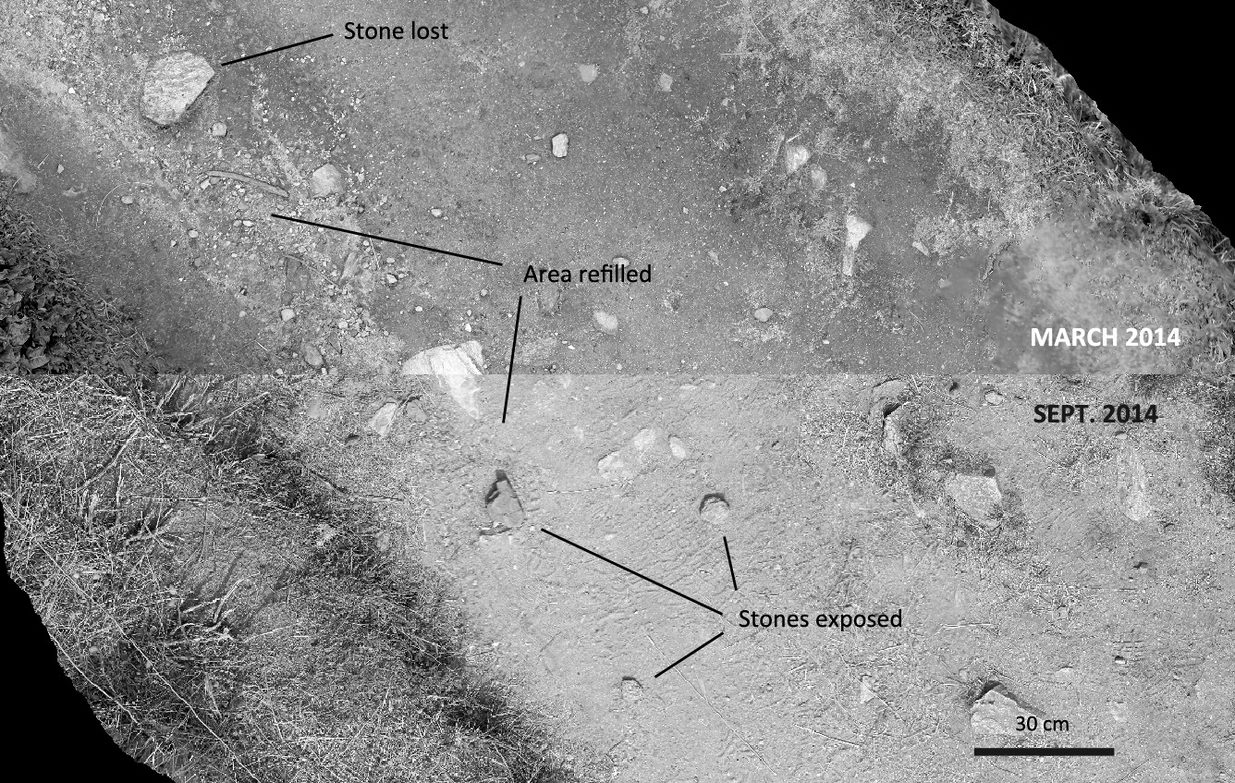 The following references constitute some of the main publications resulting from the project and from the activities and collaborations initiated during the period it was running. 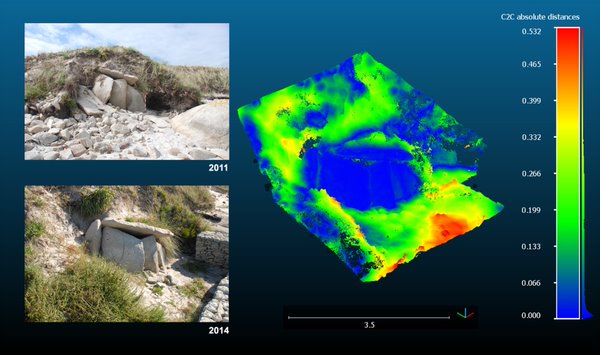 Image above: Digital modelling of the evolution of 'Monument 4' from images compiled through the Guidoiro Dixital initiative (a subset of 57 images from 2011) and from our fieldwork (2014). Cloud-to-cloud distance (in metres) computed with Cloud Compare v.2.6.0 software