Persia and its Neighbours:

Our understanding of the ancient world has long been dominated by Eurocentric perspectives, with the Roman Empire and its successor states treated as the major players.  This is neatly encapsulated by the discipline of ‘Ancient History’ which gives priority to Greece, Rome and regions around the Mediterranean. Much less attention has been paid to polities located elsewhere, except when they feature as trade partners or enemies of the western powers.  There are several reasons for this, but prominent among them is the much greater investment that has been made in research on Roman and, to a lesser extent, Byzantine archaeology, compared to that of the major powers that dominated the Middle East, and South and East Asia. In a world where we need to better comprehend the world views of people living outside ‘the west’, we should be seeking to broaden our understanding of the past beyond Europe and the Mediterranean world.

As a step on the road to a more balanced understanding of the ancient world the interdisciplinary project Persia and its Neighbours considers the Sasanian Empire between the 3rd and 7th centuries AD, a polity that extended from Syria and Iraq to western India and that at times controlled parts of Egypt and present-day Turkey. The project is led by Prof Eberhard Sauer at Edinburgh University, with a team from Durham being responsible for the landscape dimension of the research. It aims to provide insights into the nature and organisation of this empire, by focussing specifically on its frontier zones. Study areas in Iran, Iraq, the Caucasus, and Oman have been examined using a combination of remote sensing using satellite imagery, and fieldwork on the ground. The latter includes geophysical survey, targeted excavation, and the application of scientific methods of analysis that have not yet been widely employed in the study of the Sasanian empire. Our in-depth work on Sasanian frontier territories is starting to fill a major gap in our understanding of Late Antiquity and shed light on the reasons behind the longevity, economic and military dominance and dynamism of what was one of the largest empires of the ancient world at that time.

The First Phase of the Project

A pilot study of the Gorgan Wall in NE Iran (Sauer et al. 2013) revealed a major system for the defence and control of the northern frontier of the Sasanian empire; its scale and sophistication is easily comparable with the likes of Hadrian’s Wall in northern England. Of course, military power required economic support in the form of from surplus agricultural production and the wealth so generated enabled large-scale construction projects to take place.  Our study has identified urban foundations and irrigation systems such as canals, which are helping to reconstruct the frontier economy.

The Second Phase of the Project:

The Persia and its Neighbours: the Archaeology of Late Antique Imperial Power in Iran Project (Persia Project) was supported by a £2.4 million grant from the European Research Council (FP 7). It was awarded to Prof Eberhard Sauer and the late Prof Tony Wilkinson and a consortium of European Universities: Edinburgh, Durham, St Andrews, Bradford, Centre National de Recherche, Paris, and IMEP (Institut Méditerranéen d'Ecologie et de Paléoécologie), Université of Aix-Marseille 3. Following death of Prof. Wilkinson in late 2014 direction of the Durham component of the project was assumed by Prof. Graham Philip.

The Durham team has focused upon the landscape of the Sasanian Empire using a range of methods. Satellite imagery is a key tool, as it allows us not only to identify features such as settlements, canals and structures such as walls and towers remotely, but to visualize and map features across vast areas of terrain. Doing so allows us to draw conclusions about the relationship of human activity, frontiers and route networks to topography across large areas, and thus to gain results that would be vastly more time-consuming to investigate by traditional fieldwork. That said, the value of image analysis is much increased when allied to selective fieldwork, as this helps us refine our interpretation of features visible on imagery, and through the investigation of historical sources.  We have deliberately applied these techniques to a range of frontier landscapes: densely populated lowlands, high mountain ranges, broad regions of steppe where occupation is episodic, areas of desert.

Analysis of remote sensing images was used in the project to identify, map and interpret archaeological sites within the targeted study regions, particularly in Iran and Georgia. Datasets include legacy data from declassified Corona spy photography, following on from the work of the Fragile Crescent Project. We now have coverage over much of Syria, Iraq and the Caucasus, as well as selected areas of Northern Iran, Southwest Turkmenistan and Southern Arabia. Current satellite data from Landsat and SRTM sensors was used to build a picture of the landscape. Multispectral high resolution satellite imagery was also incorporated to investigate sites. These datasets were particularly useful in situations we were unable to conduct a fieldwork visit, such as our examinations of the Khandak Shapur, a potential Sasanian defensive feature in Iraq, the Besh Barmak wall in eastern Azerbaijan and the landscapes of SW Turkmenistan (north of the Gorgan Plain).

A range of surveys and excavations was carried out as part of the Project in Georgia, Iran, Oman and Azerbaijan. 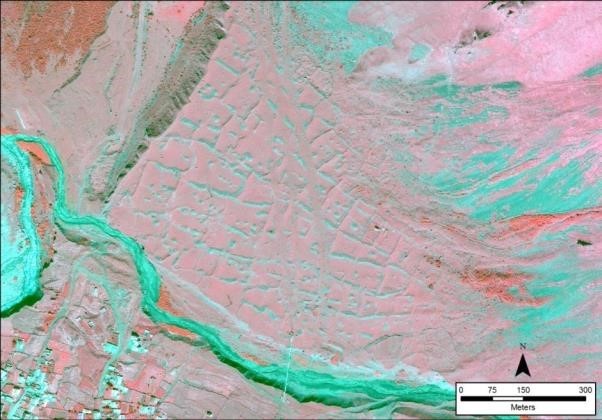 In Georgia, fieldwork has centred on the Dariali Gorge in the Central Caucasus, which for the past 2,000 years has formed a strategic border in the landscape. Excavations have revealed that there has been control of this important mountain pass from the Early Middle Ages.  The field survey, guided by satellite imagery, focused on understanding long-term settlement and land use in this sometimes challenging mountain environment.  Constant use and re-use of the same accessible land forms has resulted in a complex landscape palimpsest in which grazing and small-scale agriculture have predominated (Hopper et al 2020).

Fieldwork in Iran focused on the forts and military installations associated with the Gorgan Wall, a c. 175 km long installation which is dated to the Sasasian period This feature, and associated military and civilian settlements, represents one of the most significant frontier installations anywhere in the ancient world. Excavations suggest that the Late Antique Persian Empire built up a large army, which was an equal to its late Roman or Byzantine equivalents.  The landscape survey has increased our understanding of the relationship between urban, rural, and mobile communities in this militarised landscape, local and regional connectivity, and the significant landscape transformations that occurred in the Sasanian period and how they compared to earlier and later landscape investments (Hopper 2017). 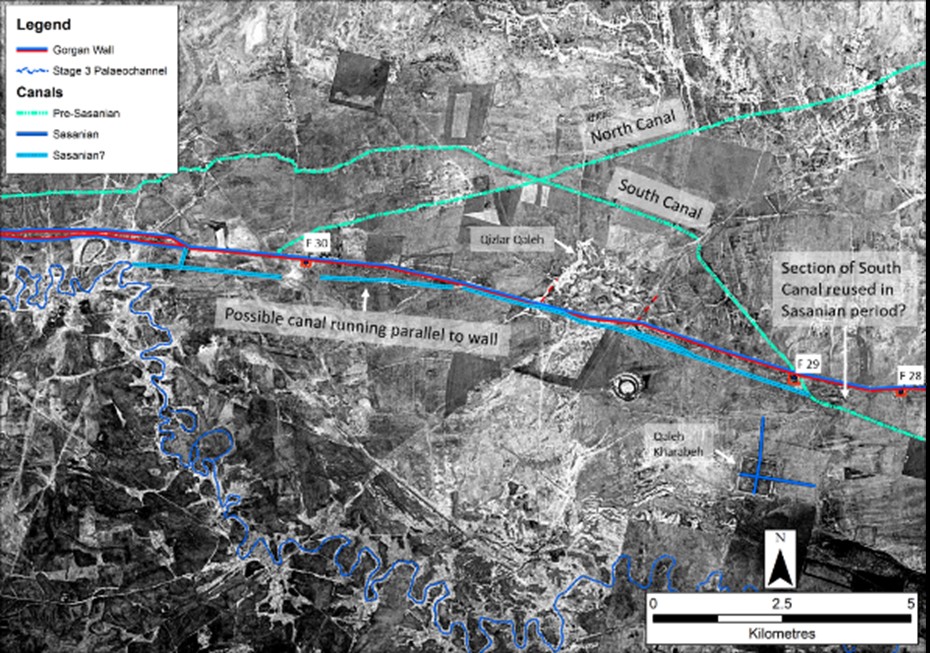 Image above: Canals associated with the Gorgan Wall, in northeast Iran. CORONA historical satellite photography, courtesy of the USGS

Fieldwork in Azerbaijan has been undertaken as part of the Mil Steppe project, directed by Barbara Helwing (Sydney) and Andrea Ricci (German Archaeological Institute). Survey in the region has recovered almost two hundred sites from the Neolithic to the Islamic periods, with a peak during the Sasanian period. We have also conducted targeted survey and excavations at the Sasanian/Islamic site of Oren Qala (ancient Beylaqan) and its associated canal system.

In Oman we have been working at the Fulaij fort site, currently being excavated by Dr Seth Priestman from the Edinburgh side of the project. This small fort represents one of the only unequivocally Sasanian sites on the Batinah plain. Survey in the vicinity of the fort allowed us to contextualise the site within its landscape, particularly its relationship to water resources, and to understand its military purpose.

Numerous water-control features such as relic canals, channels, and qanāts in the Gorgān Plain (Iran), Mil Steppe (Azerbaijan) and the Batinah Plain (Oman) were identified using remote sensing data and ground-based survey. Excavation and sampling of these large-scale systems for luminescence dating has shown that canals were maintained over many centuries during their use prior to abandonment in the 10th Century AD (approximate time of the Hunnic Invasion). Further work is currently being undertaken to explore other nearby irrigation systems such as qanāts and their potential for dating using luminescence.

An alternative story of Late Antique landscape investment is emerging in the upland areas of the Central Caucasus (Dariali Gorge, Georgia), where abundant agricultural terraces and fields systems have been mapped. Interestingly no traces of ancient systems have survived, and most date to the Late Medieval Period, suggesting that any earlier relic soil systems have been reused and significantly altered through time. The dating work is combined with an assessment of geomorphological factors and site formation processes to better understand the deposits and the implications for applying luminescence dating to landscape features in the areas studied.

Further luminescence dating work is currently being applied to heated materials such as bricks, hearths and heated sediments from Tamara’s Fort in Dariali Gorge (Georgia). Due to the complex site-formation processes and long occupation history of the site, a combination of dating methods such as radiocarbon, luminescence (Prof Ian Bailiff) and archaeomagnetic dating (Carried out by Dr Cathy Batt and David Greenwood and Bradford University) is being applied to key contexts, we aim to improve the chronological resolution of the site using a Bayesian sequencing framework.

The collaborations with international partners established through the Persia project have opened the door to further research and documentation activities.  We continue to cooperate with our Iranian colleagues to monitor threats and damages to archaeological sites in the Gorgan Plain through the EAMENA project.  A small pilot study of a large aerial photo archive in Georgia was undertaken by Kristen Hopper during the Persia project with Georgian and international colleagues.  This established important connections with the Georgian National Museum’s Centre for Archaeology that have since developed into a new collaboration to digitise the archive, also as part of the EAMENA project.

Michelle De Gruchy and Prof. Jafaar Jotheri of Qaddisyah University in Iraq obtained a grant from the British Institute for the Study of Iraq to sample and date the Khandak in Shapur waterway.

Project members who have worked with us in Durham include:

Contributions to the project were made by: