In 2009 excavations in the churchyard of St Michael and St Lawrence in the village of Fewston, North Yorkshire, revealed the remains of 154 individuals, including 21 identified people. The diaries of a local man, who lived in the Washburn Valley during the 19th century, provided rare insights into life in the village. For example, the funeral of our only excavated infant, Rowland Marjerrison, was described in the diaries, along with an account of the whooping cough epidemic that killed him. Our analysis showed that Rowland had underlying vitamin deficiencies, which is perhaps why the disease proved fatal for him. Preliminary assessment of the assemblage revealed a variety of fascinating insights into life in the village, including the first bioarchaeological evidence for pauper apprentices: children brought from workhouses in the south to work long hours in northern textile mills; see our Children of the Revolution Project Page. 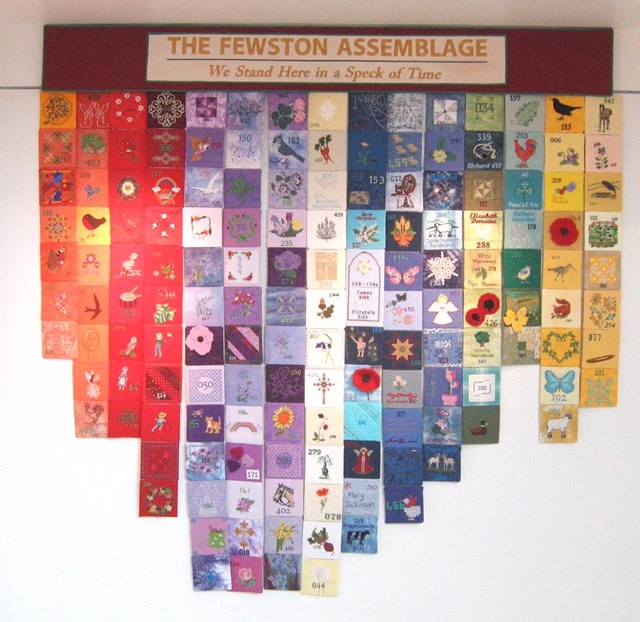 Image above: A skeletal report: each square of the wall hanging represents a single skeleton. There are 154 squares and each is colour coded by age, with the skeleton reference number, name (where known), and a decorative motif to reflect something appropriate to the named individual, or of local interest.

The dedicated team of volunteers at the Washburn Heritage Centre, under the leadership of Sally Robinson, were inspired by our preliminary osteological results to undertake a more detailed analysis. A successful application was made to the Heritage Lottery Fund for further scientific analysis, including stable isotopes, as well as a range of activities, including collaborative workshops, a permanent exhibition at the Heritage Centre, a booklet and monograph, songs and other artistic outputs (see image above), including a short film. 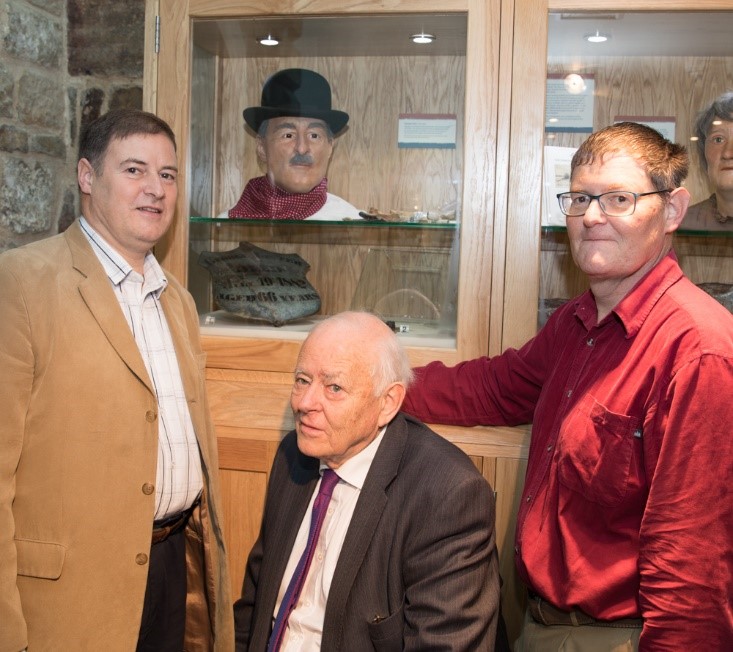 Image above: Generations of the Lister family standing next to the facial reconstruction of their ancestor, George Lister.

As bioarchaeologists we are very mindful of the ethical dimension of studying the remains of once-living people and this is thrown into sharp focus when those individuals have both an identity and living descendants. It was essential that the families were comfortable with and consented to our analysis. Communication and participation was essential for building this relationship and establishing trust. The ‘Meet the Ancestors’ day was a particularly memorable experience in this respect, in which families could view the remains of their ancestors and an osteologist talk them through the osteobiographies. This opportunity to situate skeletal remains within the context of their living relatives was exceptional and contributed to our own understanding and interpretation of these individuals.

On the 15th September 2016 a service of commemoration was held for the reburial of the skeletons. The service was attended by 150 people, including scientists, volunteers and 40 living descendants of the identified individuals. A moving ceremony ended at the graveside, with a small group singing and reading a reflective piece written by one of the volunteers about the history of the valley and its people. This project has been characterised by a spirit of enthusiasm, engagement, collaboration and the integration and analysis of multiple strands of evidence from historical sources, to the latest techniques of skeletal analysis. The uncovering of Fewston’s dead has forged new relationships amongst the living, creating communities of remembrance that resonate far beyond this small part of North Yorkshire.

Publications by the Washburn Heritage Team