The Revitalisation of Minority Languages in the Russian Federation: Nationalising Statehood, Inter-Ethnic Solidarity, and Digital Media 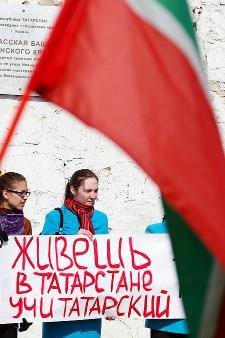 Russia is home to a large number of ethnic minority groups for whom native language is a core component of their identities. Yet from 2014, minorities in Russia have had to contend with a new political drive towards the cultural homogenisation of Russian citizens, instigated by Vladimir Putin’s national state agenda, as well as the regime’s reassertion of political control in the Federation’s multi-ethnic regions.

While there are studies that review contemporary ethnic minorities in Russia, none of them examines language revitalisation processes in sufficient detail, nor do they look at the emergence of new forms of social solidarity enabled by the proliferation of digital media. Although the recent revival of minority languages in Russia is a well-known phenomenon, the role that internet and social media platforms play in the transformation of the status of Russia’s minority languages from discriminated to prestigious remains understudied.

This project, carried out by Dr Guzel Yusupova, represents the first in-depth analysis of the impact of digital media on contemporary language revitalisation movements among Russian ethnic minorities. The research focuses on two case-study groups – the Tatar and the Chuvash. Each has its ‘own’ titular republic within the Russian Federation and the two groups are equal in legal terms, but they differ significantly in terms of economic and political resources (the Tatar being far better placed in this regard). At the same time, this project examines the much wider inter-ethnic social network of language revitalisation activists working in the digital domain, who, while belonging to different ethno-national groups, are joining forces to solve common problems.

This research is based on semi-structured interviews with representatives of ethnic minorities from Chuvashia and Tatarstan, focusing on language practices, attitudes towards ‘language’, and the use of digital media in relation to language. Also analysed are key online portals and social media interactions in the Chuvash and Tatar languages. Additional interviews are conducted with minority language revitalisation activists from ten other republics of the Russian Federation who are all working in the digital domain. This research also benefits from collaboration with the Mari Research Institute of Language, Literature and History, which is currently developing digital platforms for language revitalisation, and the World Congress of Tatars, an NGO that provides resources aimed at strengthening Tatar identity.